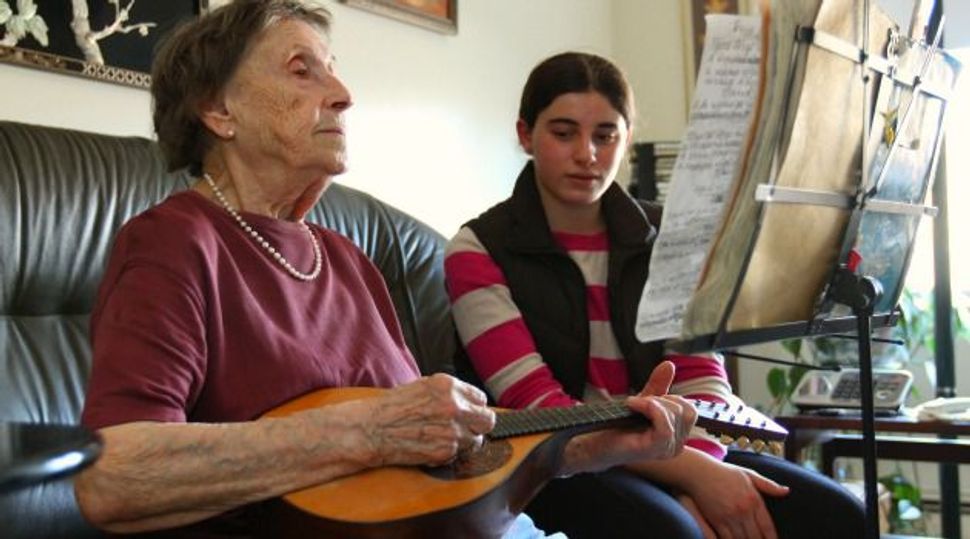 When Emily Kessler escaped the Nazis, she stopped enjoying the music she used to sing with her parents in pre-war Ukraine. But after 40 years, Kessler finally returned to the songs she loved so much. Since then, she hasn’t stopped.

Kessler’s debut concert will be the special performance at the annual charity dinner of the Blue Card Fund, a nonprofit organization that provides support to Holocaust survivors. In her melodic voice, Kessler, who has personally been a beneficiary of the Blue Card Fund for nearly two decades, will sing the Yiddish and Russian folk songs of her childhood, and play her beloved string instrument, the mandolin.

Kessler remembers the first time she was exposed to this sort of music in her shtetl, Khmelnik, in Ukraine. “I was singing at home since I was a child with both of my parents,” she recalled. “They had very nice voices.” Kessler learned to play both the mandolin and the violin in 1927 when she was just ten years old.

“Her music expresses the ghetto, Ukraine, and losing family,” said Masha Pearl, the executive director of The Blue Card Fund, explaining why Kessler will be this year’s special performer. Pearl believes that Kessler’s music “represents both sorrow and hope.”

When the Nazis invaded Ukraine in the summer of 1941, Kessler’s husband, a journalist, went to fight them and never came home. Before her family was rounded up and taken to concentration camps, Kessler says she watched the Nazis shoot her brother and later watched S.S. soldiers kill her mother and father. Widowed with a young child, Kessler survived the war through a combination of extraordinary grit, the kindness of strangers, fake documentation papers, and several years roaming between homes and sleeping in attics and parks to avoid the police or S.S. officers. Back then, she had blonde hair, the bluest eyes, a Ukrainian surname, and lied about her Jewish roots to survive.

“They ask me, ‘Are you Jewish? Are you Juden?’ I say I am not,” Kessler recalls of one of many encounters with Nazi soldiers. Many memories are so disturbing, she prefers to keep them to herself.

“I lost my mind,” she says. “I didn’t understand [anything]. My fear took away my mind. I wanted to go only home. Until now, I don’t how I survived with children, without food.”

Through fake papers, Kessler was able to avoid the camps. Eventually, she made her way with scores of other refugees to New York.

After Kessler escaped the ghetto, she stopped playing the mandolin altogether. “I was in the ghetto Khmelnik,” she said. “How could I play at that time? I had a feeling that the propaganda against the Jews then — and a lot of it was spread through music — was so strong that even I began to imagine that I should be dead. How could I play after that?”

“She didn’t pick up a mandolin for 40 years,” explained Pearl. “Now it keeps her going.”

“Emily is someone who has overcome many obstacles in her life,” Pearl added. “Due to her cancer surgery, the fact that she’s still able to sing and play the mandolin is really incredible.”

Emily isn’t nervous for Monday night, but she said, “I always feel like I have more practicing to do! I don’t like to make mistakes.”

The performance will be attended by Blue Card Fund supporters and beneficiaries. “There will be Holocaust survivors in the audience,” Pearl explained, such as Monica Smith, a cousin of Anne Frank, and a 104-year-old survivor of the camps. “Emily playing about loss for other survivors promises to be very powerful.”