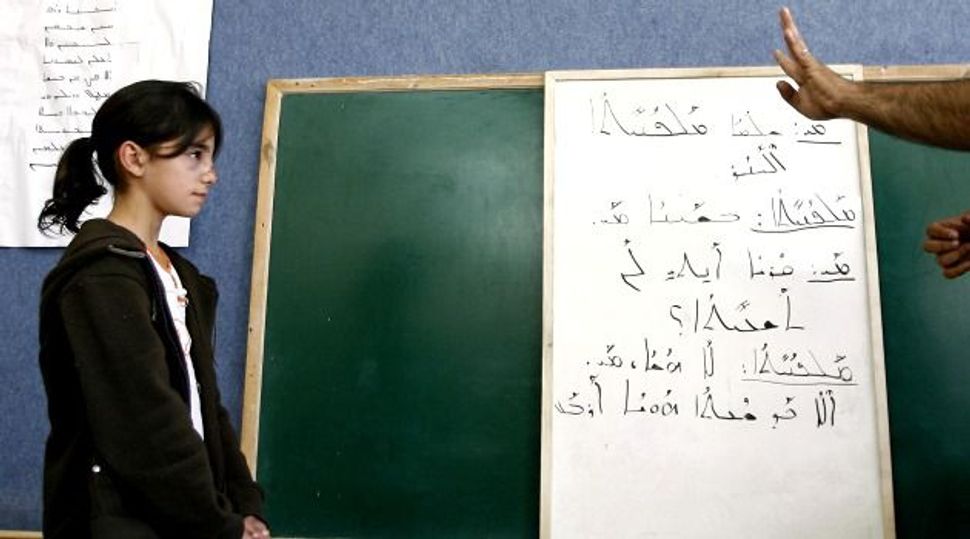 (Reuters) — In the green hills of the Galilee, where Jesus is said to have preached two thousand years ago, a group of Aramaic speakers looking to revive the language of Christ are celebrating a victory in their quest to safeguard their heritage.

In a place where tensions run high on issues of ethnicity, faith and citizenship, members of the Christian sect have won the right to change their designation in the population registry from “Arab” to a newly-created ethnic classification: “Aramaic.”

The group that sought the change is small, a few hundred people at most, but their campaign is part of a larger debate on issues of identity in the Holy Land and Israel’s treatment of its Arab minority.

Supporters say Israel’s agreement to allow the group to define itself as “Aramaic” is a sign of ethnic tolerance.

But critics call it an attempt by the government to encourage splits within its Arab population, which largely defines itself as Palestinian and makes up about a fifth of the country’s 8.2 million citizens.

Others say it is also another reflection of the reality for Arabs in Israel, where many Arab citizens say they are discriminated against.

Shadi Khalloul, a former captain in the Israeli army, heads the Aramaic Society in Israel, which lobbied the government for the change. His two-year-old son, Yacov, is the first in Israel to be listed as Aramaic.

“It’s a spiritual matter, to feel I am equal among equals, that I am no less than them – Jews, Arabs, Circassians, Druze, Italians, Greeks. My forefathers would be proud,” said Khalloul, who volunteered for the military, which drafts Jewish men and women at the age of 18 but exempts Arabs from conscription.

The campaigners are all residents of the village of Jish and belong to the Maronite Church, which took root in fifth-century Lebanon. Its liturgical language is Aramaic, dialects of which are spoken by no more than a few hundred thousand people across the world.

Speaking at the ceremony to mark the change in October, Interior Minister Gidon Saar said Aramaics had suffered persecution, oppression and discrimination in the Middle East, and that Israel, built as a home for Jews, who themselves suffered persecution, “must protect this minority and allow it to keep its culture and heritage.”

But not everyone in the Arab village of 3,000 is pleased.

“They are ashamed of their ethnicity,” said Marvat Marun, 39. “I’m Arab, a Christian Maronite Arab, and proud of it. My roots are Palestinian.”

Knesset Member Basel Ghattas, of the Arab party Balad, said Israel’s recognition of the minority was meant to sow divisions and animosity within the Arab population.

“This is a divide-and-rule policy, not to see us, the Arabs, as part of the Arab Palestinian nation or a national minority, but as a collection of small ethnic groups and to sow disputes and splits among us,” said Ghattas, who is Christian.

The Assembly of the Catholic Ordinaries Justice and Peace Commission, the Catholic Church of the Holy Land, called on those planning to change their listing to “come to their senses”:

“We are Christian, Palestinians, Arabs,” it said in a statement. “Israel does not need Christians who have deformed their identity, who position themselves as enemy of their own people and who become soldiers for war.”

“Serve yourselves, serve your people and serve Israel in remaining faithful to the truth, i.e. faithful to your identity as Christians, as Palestinians and as peacemakers.”

“It is not the vocation of the church to intervene in how people identify themselves, but to build a culture of communion and openness to others,” he said.

It was not clear how many of those eligible to apply for the new designation would actually do so beyond the original group. The Interior Ministry has not yet outlined the formalities, so Khalloul’s toddler son is so far the only Aramaic Israeli.

Chen Bram, an anthropologist at the Hebrew University, said the Galilee Aramaic speakers’ campaign can be seen in a wider political context.

“It shows us that it is hard to be Arab in Israel and that there is growing polarization in Israeli society.”

Israeli society has a de facto hierarchy in which Jews are at the top, Bram said. The more one is seen as closer to the Palestinians, the lower one ranks, and “if you distinguish yourself from that group, you make it easier for yourself in contact with the authorities and getting support for your culture,” he said.

About 83 percent of Israeli Arabs are Muslim and about eight percent Christian, according to the Israeli government statistics bureau. The remainder are Druze.

Fady Mansour, 36, intends to change his listing to Aramaic, and said he was motivated partly by social advancement.

“Arab is inferior in Israeli society,” he said, speaking from the stone steps of Jish’s church. “When there is a (Palestinian) attack people yell ‘death to Arabs’. Why do I have to be included in that?”

Bram says formal recognition of an Aramaic ethnicity is also linked to a recent push by Israel to recruit Christian Arabs into the military.

Christian Arabs traditionally stand alongside Muslims when it comes to Israeli-Palestinian issues, which means that they do not volunteer for army service.

“This raises great controversy among the Christian communities,” Bram said of the move.

The new designation may help the Aramaic community in Jish with another campaign, this one over land.

Many in Jish have roots in Birim, a neighboring village whose Maronite residents were expelled by Jewish forces in the 1948 war of Israel’s founding. Israel razed the village in 1953, sparing only its church and bell tower.

In a legal battle going back decades, Birim villagers have campaigned to be allowed to return and rebuild.

No longer being classified by Israel as “Arab” could help the community separate its claim from the issue of right of return for Palestinian refugees.

Hundreds of Palestinian villages and towns were razed, left empty or taken over in the war and their residents fled or were expelled. The Palestinians demand that up to five million refugees and their descendants be allowed to return.

“I don’t care about the right of return, the Palestinian struggle. I want to rebuild an Aramaic village,” Khalloul said.

Nadim Issa, 59, who convenes meetings of the Aramaic Society at his winery, said: “The day will come when we rebuild Birim. Just as they granted us ethnicity, they will give us back our land.”

Aramaic, a Semitic language related to Hebrew and Arabic, was once the common language of the region, but Arabic largely replaced it after the 7th century Muslim conquests.

The language was perhaps most widely brought to the world’s attention in Mel Gibson’s 2004 movie “The Passion of the Christ,” which was shot Aramaic, Latin and Hebrew.

During a visit to the Holy Land last May, Pope Francis and Israeli Prime Minister Benjamin Netanyahu had a brief on-camera disagreement about the language Jesus spoke.

Aramaic is in danger of dying out, however.

Eleanor Coghill, a linguist from the University of Konstanz and researcher for the Cambridge Neo-Aramaic database project, said the Syrian civil war and advances by Islamic State in Iraq have badly affected some of the few native Aramaic-speaking communities still living in their historic homelands.

“While it is good to hear that communities elsewhere are interested in their Aramaic heritage, it is difficult to fully revive a language as a living tongue,” said Coghill.

Khalloul’s group holds Aramaic lessons for the children of Jish, a small village which slopes down a hill near the Lebanon border, where more than a third of the population is Muslim and Arabic is the everyday language.

“I felt the young generation was getting lost and our history and heritage were fading away. We go to church and recite Aramaic like parrots, not knowing what we’re saying,” Khalloul said.

“This treasure bequeathed by our fathers should be protected and not abandoned over globalization and Arabisation.”