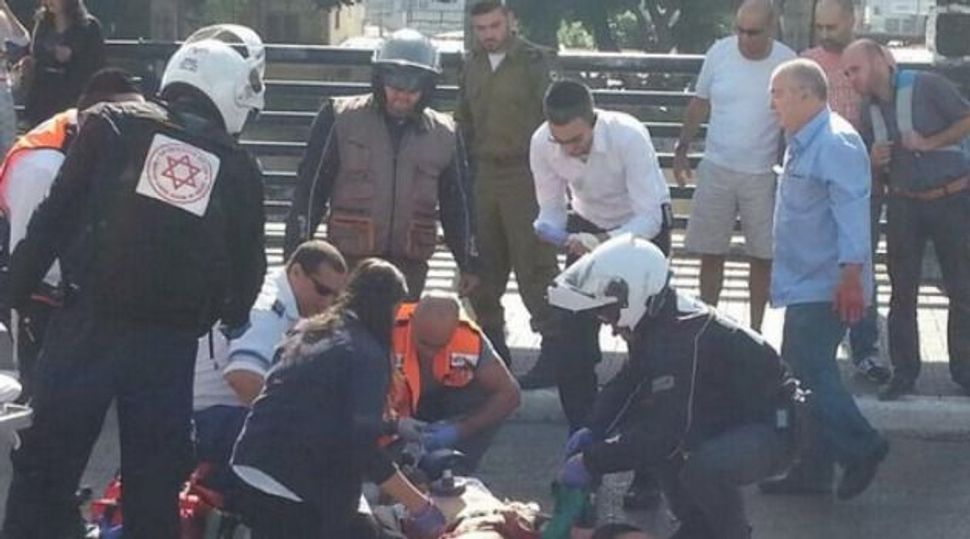 A Palestinian stabbed and critically wounded an Israeli soldier near a Tel Aviv train station on Monday, police said, as anti-Israel violence that has raised concern about a new Palestinian uprising in the making reached the country’s business capital.

Israeli-Palestinian tensions have festered over access to a Jerusalem compound housing Islam’s third holiest site and where biblical Jewish temples once stood. Stone-throwing protests have also erupted in several Arab towns in Israel since Saturday, when police killed an Arab youth who assaulted them.

A spokesman for the Magen David Adom ambulance service said the Israeli soldier, aged about 20, was rushed to hospital after Monday’s stabbing in Tel Aviv.

“I saw the terrorist, in a red shirt and jeans, running in the direction of Levanda Street … I chased him, and came back and saw the soldier writhing on the ground,” an unidentified witness said on Israel Radio.

Police said the attacker had stabbed the soldier several times and they arrested a suspect, a Palestinian from the city of Nablus in the occupied West Bank. They said the assault was apparently politically motivated.

“These are difficult days in Israel. Today there was another terrorist attack, on a soldier. We must fight terrorism,” Justice Minister Tzipi Livni, Israel’s chief peace negotiator in talks with the Palestinians that collapsed in April, said on Twitter. There was no immediate Palestinian comment.

Five days ago, a Palestinian rammed his car into pedestrians in central Jerusalem, the second such incident of its kind in as many weeks, killing two Israelis. Police shot the driver dead.

After those attacks, Israeli authorities placed large concrete blocks on train platforms in Jerusalem to serve as obstacles to any vehicles attempting to ram into commuters.

Economy Minister Naftali Bennett, who heads a far-right party in the governing coalition, said such defensive measures only projected weakness. “This is a terrible terror attack that proves that the concept of hiding behind barriers is bankrupt,” he said in a statement after the Tel Aviv stabbing.