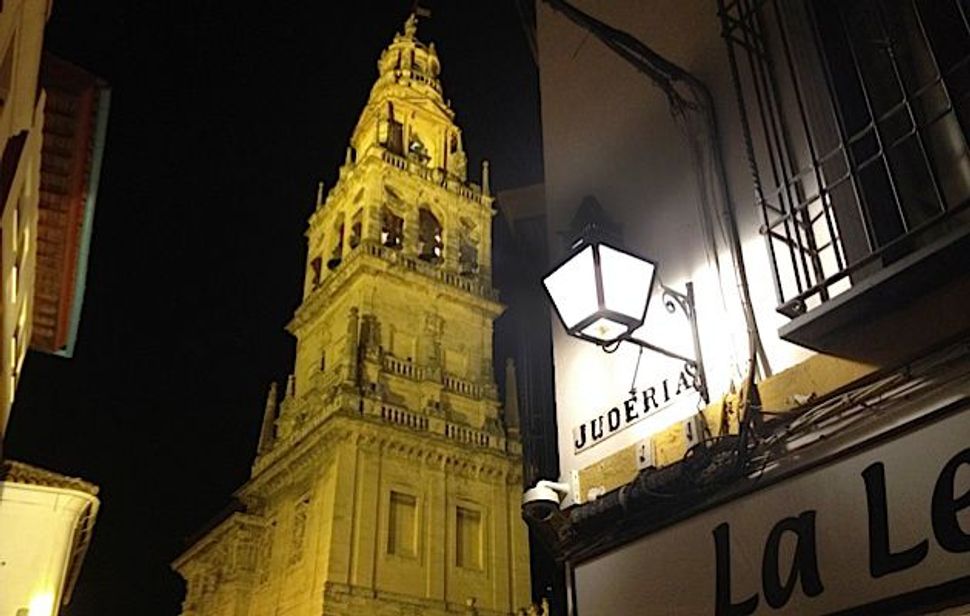 Juderia: A night-time scene in the historic district of Córdoba, Spain Image by Josh Nathan-Kazis

Spanish-speaking Israelis complained that Spain’s legislation for the naturalization of Sephardic Jews has been rendered symbolic because of changes to a bill that would formalize the procedure.

The changes to the government-supported draft bill were introduced last month during deliberations at a congressional committee ahead of a vote by the Spanish Congress scheduled for Dec. 16, Leon Amiras, chairman of the Association of Olim from Latin America, Spain and Portugal, told JTA on Sunday. Olim are people who immigrated to Israel under its law of naturalization for Jews and their relatives.

The revisions that “render the bill declarative but ultimately meaningless,” he said, include a demand that applicants be tested in Spain by a government-approved notary on their knowledge of Spanish and Sephardic culture. If they pass, applicants would need to return to Spain at a later date for another procedure.

The current draft bill is based on a text approved earlier this year by Spain’s ministerial committee on legislation. It stipulates applicants must have cultural and linguistic ties to Spain, and lineages accepted by recognized rabbinical authorities as Sephardic and thus traceable to Jews who resided in Spain before the mass expulsions of Jews that occurred after the 1492 inception of the institutionalized, religious persecution of Jews known as the Spanish Inquisition.

Speaking in the Spanish Congress on Dec. 2, Spain’s newly-appointed justice minister, Rafael Catala, said the law on the Sepharadim would “correct a historical error.”

But citing the insistence that the application process happen in Spain rather than through its embassies, Amiras said the new stipulations mean “the law would be an empty gesture. Ordinary would-be applicants are not going to jump through these hoops.”

He has written to Spanish government officials to ask they address the issue but said he has not received a reply.