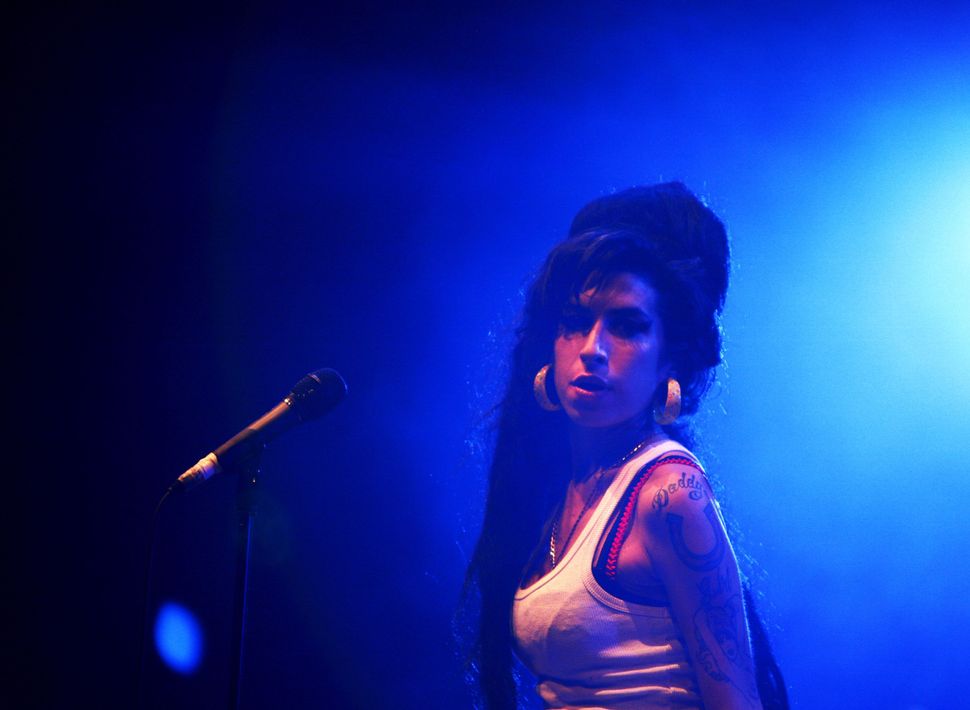 “It’s Amy, your favorite Jewish girl!” Amy Winehouse exclaimed after the beep — she was leaving a voicemail for her friend and former manager, Nick Shymansky.

I didn’t even know Amy Winehouse was Jewish. There are lots of things I didn’t know about the late jazz-pop singer. Until I saw “Amy,” the new documentary about her directed by Asif Kapadia.

To me, Amy Winehouse was the lady with the iconic beehive hairdo and eyeliner so thick that it almost looked clownish. She was the woman who always had a half-burnt cigarette drooping from her lips and too much skin showing. The one who sang about not going to rehab, and then died perhaps because she should have.

But the documentary made clear that I was one of many, many people who saw Amy Winehouse in precisely the way the media had so wrongly portrayed her. Through a series of interviews and soundbytes from friends, colleagues, lovers, family, and Winehouse herself, it becomes clear that she was not some Red Carpet creature, but rather, an extremely talented, ambitious and promising artist. I felt embarrassed and naïve that I had judged her to such an extreme.

“She had the stylings of a 65-year-old jazz singer,” her producer, Salaam Remi, says in the documentary. “I was like, ‘If this is where you are when you’re 18, where are you going to be when you’re 25?”

The documentary opens with a homemade video of a then 14-year-old Winehouse singing ‘Happy Birthday’ to a friend. Despite the crappy, fuzzy quality of the camcorder, her voice carries clearly. I (and the half-filled Lincoln Square movie theater) was shocked to hear such a soothing, dynamic voice come from a young teen in spaghetti-straps.

In one interview in the doc, Winehouse tells The Observer’s Garry Mulholland that she never thought she’d be big. And that quite frankly, she didn’t care to be big; she hated the stardom. She started writing music simply because she felt there was nothing else that she could listen to, nothing else that really did it for her. Success and fulfillment, for Winehouse, meant performing for tiny audiences in cozy, smoky jazz clubs. “All I’m good for is making tunes,” she said in the film, adding that she hoped the press would just leave her alone.

Which the press did not do, and which was a big part of Winehouse’s downward spiral. In the film, Nick Gatfield, a friend and executive at Island Records, says that Winehouse “was a very old soul in a very young body,” and it seems the incessant paparazzi warped her from this old soul and musical purist into the stereotypical young, troubled artist who gets addicted to drugs and then falls victim to partying too much. When really, after seeing this documentary, it seems like the media were largely to blame.

Winehouse had been taking Seroxat, an anti-depressant, since age 14. After a messy breakup with a bad-influence boyfriend named Blake Fielder – coupled with the constant media frenzy – Winehouse stopped eating and started drinking heavily. One scene at the recording studio shows her nursing a whiskey in between takes. She is bulimic, disappearing mid-rehearsal, leaving the studio’s toilet bowl splattered with that day’s lunch, and returning with eye makeup smeared across her face. Over the course of the documentary, her full, round voluptuous body becomes withered and sickly. In the beginning, we see her dangling a bag of weed in front of the camera before performing a big concert. To get high and relax a little, presumably. But later in the movie, she and Fielder are doing cocaine, crack-cocaine and heroin regularly. She was 23.

Though she agreed to go to rehab, her father, Mitch Winehouse, told her she didn’t need to go. (Cue the lyrics: “I ain’t got the time / And if my daddy thinks I’m fine / They tried to make me go to rehab / I won’t go, go, go.”) To her, Mitch Winehouse was a guiding force. But to anyone watching the documentary, he seems like an overaggressive, money-thirsty Stage Dad, pushing his daughter to stay in front of the cameras, despite her deteriorating mental and physical health. She got to such a dangerous place that her former manager, Shymansky, said he wouldn’t take her on unless she’d get help. Her bodyguard, Andrew Morris, became one of the only people she was able to talk to.

Most striking is how the film interweaves Winehouse’s victory and tragedy: Video footage of her successes and awards are interspersed with images of her downfall. She reached an all-time low in 2007, but took home Record of the Year at the 2008 Grammy Awards, beating out Beyonce and Justin Timberlake. After a very brief acceptance speech, Winehouse exited the stage with her best friend and former flat-mate, Juliette Ashby. “Jules,” she said. “This is so boring without drugs.”

She relapsed shortly after, and the media was unsympathetic. Among many others, comedians Jay Leno and Graham Norton mocked her addictions. In 2011, she was slated to perform a gig in Belgrade for her “Back to Black” album, but she dreaded it so much that she got wasted to avoid it. When she showed up on stage, visibly high and disoriented, concertgoers ridiculed her and demanded for their money back.

By the end of the documentary, the 27-year-old Jewish girl from north London – who had big, green-hazel eyes, adorably crooked teeth and a lip ring that looked like a pretty mole — gets carried out of her flat on a stretcher, lifeless, a red blanket covering her body. The camera pans montages of the jazz icon’s song lyrics, scribbled next to doodles on notebook paper. The credits roll as the upbeat Winehouse track “Valerie” plays.

Strangely enough, by the end of the documentary, I saw a little bit of myself in Amy Winehouse. Or maybe I felt a little bit of Amy Winehouse in me. When her career skyrocketed, she was the same age that I am now. Like me, she tried to flex her creative muscles while tuning out scrutiny and criticism. The irony, though, is that as a journalist, as someone in the media, I’m one small part of the force that destroyed this brilliant, gifted artist. I’m proud to do what I do, but seeing this young woman get torn apart by the press almost made me ashamed. The documentary was, in some way, a strong reminder to journalists that the subjects of our stories and the objects of our criticism are still human.

Alexandra Levine is the Forward’s culture intern. Contact her at [email protected]