How Kenny Schaffer Became the Father of Invention 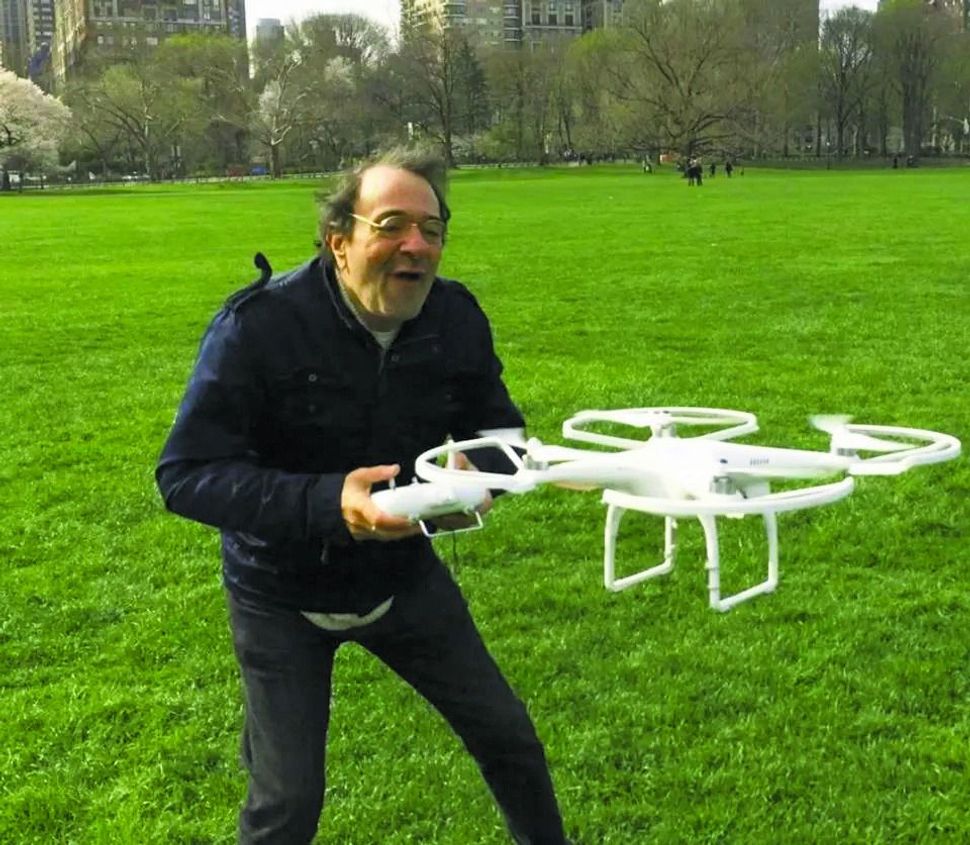 Image by Courtesy of Kenny Schaffer

‘A lot of things are invented by people looking for money,” says Kenny Schaffer. “Many people say I should be a billionaire many times over, but it doesn’t matter to me. I go for ideas that stimulate or excite me. It’s not the American way of doing business, but I’ve been able to eke out a living okay.”

While Schaffer’s intellectual curiosity hasn’t translated into untold riches — at least, not yet — it has taken him down some fascinating and unexpected paths. Born in 1947 to a working-class Jewish family in the Bronx, Schaffer became obsessed with radio waves while still in elementary school. At the age of 9, he was the youngest licensed ham radio operator in the United States; two years later, he finished second in a high-speed Morse code contest held at the Waldorf Astoria.

During the mid-1960s, Schaffer and a couple of fellow ham radio buffs somehow convinced famed jazz violinist Harry Lookofsky to hire them to build a recording studio in Midtown Manhattan. The studio, World United, was where the Left Banke — a band led by Lookofsky’s son Michael — recorded their debut album, the 1967 baroque-pop classic “Walk Away Renée/Pretty Ballerina.” Schaffer served as an engineer on that record, though his inexperience behind the board became clear when he inadvertently erased a painstakingly recorded strings overdub on one of the songs.

“Forty seconds into it, I realized what I’d done,” he said. “I excused myself to go to the bathroom, and I didn’t come back for two weeks!” When Schaffer finally came out of hiding, he utilized his exceptional gift of gab to re-brand himself as the band’s publicist, a gig which eventually led to similar gigs with such stars as Alice Cooper, the Turtles, Todd Rundgren, and (on behalf of the Hayden Planetarium) the Comet Kahoutek. “Basically, I would take on clients who were so friggin’ good, all I had to do was get out of the way so I didn’t screw it up.” 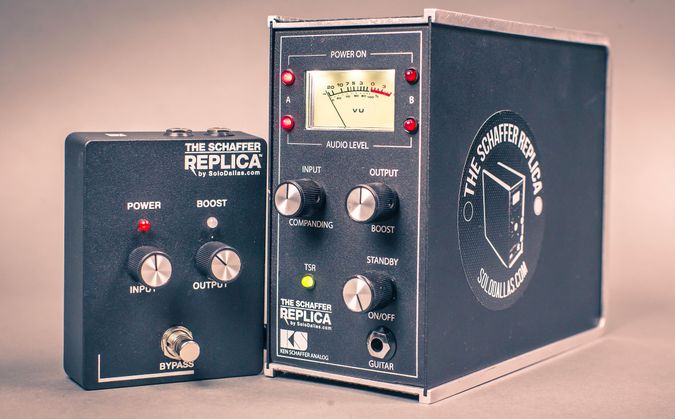 What’s the Frequency, Kenneth? Kenny Shaffer has invented everything from a
wireless amplification system for electric guitars to a satellite tracking system.

Schaffer wound up making his mark on rock history with another, more wholesome (or at least more practical) device: A wireless unit that enabled musicians to connect electric guitars to their amplifiers without using cables. While Simmons and his bandmates would become early adopters of the then-radical unit — known as the Schaffer-Vega Diversity System — it was the Rolling Stones who actually inspired the device’s development. Schaffer, who was hanging out on the Stones’ 1975 tour of the U.S. (his girlfriend at the time was the band’s tour director), noticed that Mick Jagger was having difficulty with his wireless microphone.

“Nineteen seventy-five was the first year that the Stones sold tickets in the back of the arena, behind the stage,” he explains, “and every time Jagger would run back there to sing to the people with his wireless microphone, it was a disaster. You’d get police radio and cab calls coming through, like, ‘We got a floater on 33rd Street!’ or ‘Pick up Mrs. McCarthy at 34th and Madison!’” Realizing that he could use his radio-building skills to come up with a wireless mic that would eliminate short-wave interference and signal dropouts, Schaffer took the concept one step further by applying wireless technology to instruments, as well.

The resulting Schaffer-Vega Diversity System, which allowed musicians to traipse the length and breadth of arena stages untethered by cables (and freed them from the risk of electrical shock, a big selling point for KISS’s Ace Frehley), was soon adopted by many of the major acts of the day, including the Stones, the Electric Light Orchestra, Earth, Wind & Fire, Aerosmith, Boston and the Grateful Dead — the latter of whom employed a SVDS unit to make an echo chamber out of the Grand Chamber of the Great Pyramid during their legendary 1978 Egyptian concerts. 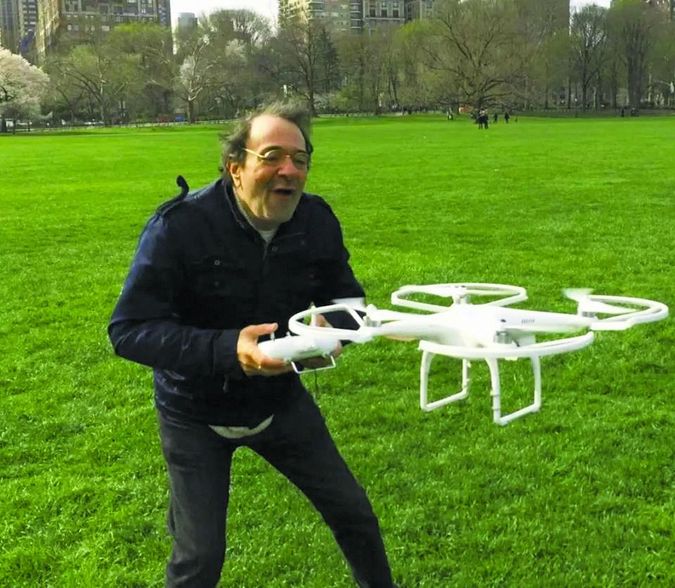 Image by Courtesy of Kenny Schaffer

But much to Schaffer’s surprise, the SVDS also became a popular studio tool; influential guitarists like Eddie Van Halen, Pink Floyd’s David Gilmour, and AC/DC’s Angus Young realized that the device fattened and enriched the harmonic overtones of their instruments in an incredibly pleasing way. “There’s a ‘compander’ in there, which is basically a compressor and an expander, like Dolby and DBX,” Schaffer explains. “It made a huge difference in the signal to noise ratio, that was the intention, but it also made a subtle difference in sound. Well, subtle to me — maybe not subtle to you or anyone who doesn’t have a hearing aid!”

Schaffer estimates he sold about a thousand SVDS units in the late ’70s and early ’80s, but says he got bored with his invention once similar but more affordable wireless devices began flooding the market. “I do believe that great ideas come to many,” he reflects. “Some people are like, ‘You’re a fucking idiot! Why didn’t you patent that?’ Well, when I was in Bronx High School of Science, I thought that patents went to people who suffered with bread and water in the basement with no sun for years — you know, they got patents. And all the stuff that ever came to me was like, ‘What a goofy idea! What if I touch those two wires together?’ It was my hobby!”

In any case, Schaffer had become more interested in television by then — specifically, Russian television. In the 1980s, he invented a satellite tracking system that allowed viewers in the U.S. to watch live Soviet television, a mind-blowing concept in the waning years of the Cold War. The invention spawned Schaffer’s still-torrid love affair with Russian culture, leading to a job as the American publicist for Russian rock star Boris Grebenshchikov, and a marriage to Russian actress Alla Kliouka, best known for playing Svetlana on “The Sopranos.” (The two are now divorced.) It also resulted in the bizarre 1986 altercation in which journalist Dan Rather was beaten on the streets of New York by assailants demanding, “Kenneth, what is the frequency?” Schaffer chalks up the incident to a case of mistaken identity; whoever the men were, he says, they were obviously looking for him, not Rather.

In 2003, Schaffer invented TV2Me, a “placeshifting” device that allowed users to access cable and satellite TV channels from anywhere in the world on any Internet-connected device. Sling Media’s Slingbox, which offers a cruder version of the technology at a more affordable price point, was introduced to the market two years later. (“My thing was a million times better than the Slingbox,” Schaffer insists, “but mine sold for $4,500, instead of $200 in the window of Best Buy.”) In recent years, Schaffer has been concentrating on a device that will prevent people from texting while driving. The project hit a snag when, after spending $50,000 developing and (for once) patenting it, he realized that the device worked fine in his New York apartment, but not at all within the actual confines of a car. “I don’t get discouraged,” he shrugs. “Inventions are based on failures.” Now, with Sting (an early adopter of TV2Me) and his people on board as investors, Schaffer says the project is coming much closer to fruition.

Despite being out of the music world for almost 30 years, Schaffer has recently found himself unexpectedly back in the rock spotlight, thanks to the introduction of the Schaffer Replica. A guitar effects pedal (or “stomp box”) based on the same circuitry as the Schaffer-Vega Diversity System — but without the wireless capability of the SVDS — the Schaffer Replica enables guitarists to dial in the same fat, dirty rock tones that dominated such classic albums as Van Halen’s “Van Halen II” and AC/DC’s “Back In Black.”

“This Schaffer Replica thing just dropped out of a spaceship, really,” Schaffer said. “I was just sitting at the computer and reading Facebook when I got an email from this Italian guy named Fil Olivieri. He was telling me that he’d heard ‘Back In Black’ in the back seat of his daddy’s car when he was 12, and ever since then he’d been on a search to discover how that sound was made.” Olivieri had spent hundreds of thousands of dollars on vintage Marshall amplifiers and Gibson SG guitars, while trying to duplicate Angus Young’s iconic roar. “He’d got to where it was like, 80% there, but it wasn’t ‘Back In Black,’” Schaffer explains.

But once he came across a 1984 issue of Guitar Player Magazine in which Young talked about using the SVDS in the studio, Oliveri realized he’d discovered the missing component to the guitarist’s amp-shuddering sound. After contacting Schaffer, Oliveri convinced the inventor to part with his last two SVDS units, and hired a team of engineers to analyze their components down to the last capacitor. Oliveri then used their findings to develop the Schaffer Replica, with Schaffer playing the role of the beaming godfather.

“They nailed it,” Schaffer enthuses. “Fil’s not just looking to maximize on his investment. He really wants to give the world that dirty, gritty, ear-blasting sound of classic rock — that stimulation of sound that we don’t get from Katy Perry or Pharrell Williams. That stuff doesn’t get down to your bones, you know?”

Indeed, the pedal has been hailed as a revelation by numerous guitar magazines; Angus Young, who hadn’t used his SVDS on an AC/DC record since the 1980s, even employed one on the band’s new “Rock Or Bust” LP. “I’m having so much fun with this,” says Schaffer. “I’m not really making any money from it; I’ll get a royalty on sales, but that’s not even the issue. These guys are such devotees, and I’ve enjoyed guiding them in whatever way I can to help them bring this sound back.”

Dan Epstein is the author of “Stars and Strikes: Baseball in the Bicentennial Summer of ’76,”

How Kenny Schaffer Became the Father of Invention