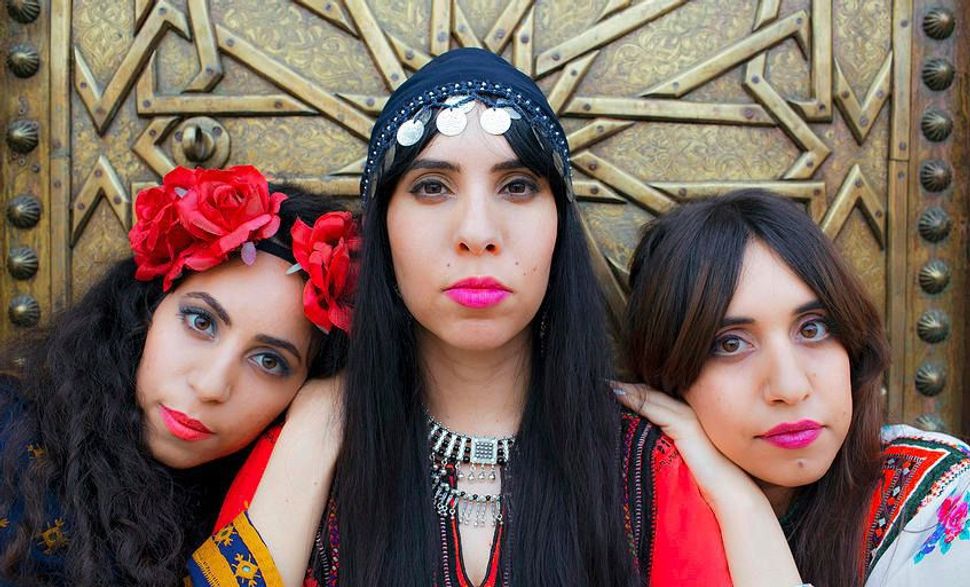 A trio of sisters wearing hot pink hijabs piles into a dusty white Jeep and rambles across the desert. At home in the village, a man with a closely-cropped white beard shaded by his military cap whips a lash upon the cracked, sandy ground, while an elderly woman with sunken eyes and gold-painted fingernails puffs idly from a hookah as she sits in a rocking chair. She watches a crew of young men in blue track suits bounce around to what looks like a choreographed hip-hop routine, but really it’s a type of folk dance known as the “Yemenite Step.” Bright and colorful, these scenes were filmed to accompany the somber undertones of the Yemenite folk song, “Habib Galbi” (“Love of My Heart”), recently infused with electro-pop beats by A-WA — an Israeli band that has been gaining popularity from Tel Aviv to Tangier.

Tair, Liron and Tagel Haim, the three sisters who make up A-WA, told me during a Skype conversation that growing up, their lives resembled an Israeli “Little House on the Prairie.” The sisters, ages 26 through 32, are the eldest of six children, raised in Shaharut, a tiny farming village, in the Arava Valley of southern Israel. As children, they would perform at school concerts, run around barefoot, and “sing to the wind,” as one of the sisters put it. Their mother, of Ukrainian and Moroccan heritage, used to give them pots and pans as percussion instruments. “We blossomed at home,” said Liron. Four years ago, on a trip back home from Tel Aviv and Ramat Gan, where the sisters now live, they began collaborating again and officially started their band A-WA. It’s pronounced “Ay-Wah” and means “yeah” in Arabic slang.

The Haim sisters sing in what they call “Yemenite,” a nearly extinct dialect of Arabic spoken by the Jews of Yemen. “Our dad, who’s the Yemenite one, was not sure at the beginning how people would embrace this kind of music,” said Tair. “He said ‘Ah, I love Greek music, make something Greek,’ but we said, ‘No, this is what we feel in our souls.’” The Haim sisters say singing in Yemenite is a way to understand their heritage and connect with their grandparents. From 1949 to 1950, Operation Magic Carpet brought 50,000 Jews from Yemen to the newly established state of Israel.

Yemenite songs like “Habib Galbi” were passed down through generations, but only as recently as the 1950s and ’60s were they recorded in Israel. The Haim sisters wanted to rejuvenate these songs, but needed a producer. They sent a demo of “Habib Galbi” to Tomer Yosef, the lead singer in the electronic Gypsy punk band Balkan Beat Box. The sisters felt a kinship with Yosef because he also comes from a Yemenite background. Yosef gave the demo to “his tribe” of elder Yemenite women. They loved it and even mistook the sisters as being from Yemen.

Like their father, the sisters were initially unsure about how the public would react to them singing in Arabic. They say they were nervous but optimistic. “You have to go with your guts and stay connected to where you come from,” said Tair, who learned to sing jazz at the Rimon School of Music, where she earned her degree. Now their hit single “Habib Galbi” has been viewed on YouTube over 720,000 times, and they have played concerts all over Israel and Europe. 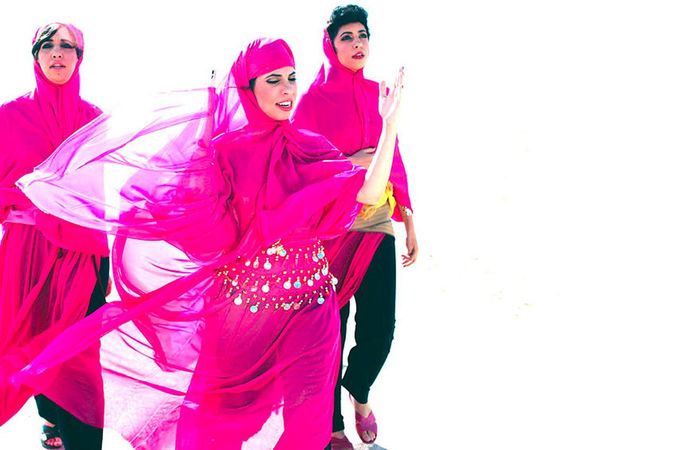 Appealing to Arab and Israeli Ears: The members of A-WA donned pink hijabs for a music video in which they perform a dance called the ‘Yemenite Step.’ Image by Luke Brossette

In the past, however, Arabic — the language of Israel’s Mizrahi Jewish immigrants — has often carried a stigma since it was the language spoken by Israel’s adversaries. Former President David Ben-Gurion’s “melting pot” policy of creating an Israeli identity meant shedding and suppressing Diasporic languages like Ladino, Yiddish and distinctly Jewish dialects of Arabic. So while Ashkenazim have made up the majority of the Israeli government, Mizrahim have historically been among the poorest and most disenfranchised of Israel’s population.

A-WA is part of a movement that celebrates Jewish-Israeli cultural roots in Arabic. Now, after decades of discrimination, the younger generation of Mizrahim is rediscovering their Jewish ethnic identity as Middle Easterners and reclaiming their heritage. Being Mizrahi is cool, the Haim sisters say.

A-WA and Tomer Yosef aren’t the only musicians to revive Yemenite Jewish identity. The sisters point to a 1960s recording of “Habib Galbi” by Shlomo Moga’a, who immigrated to Israel from Yemen after World War II. In the 1980s, Israeli pop singer, Ofra Haza, also sang in Yemenite. Known as the “Madonna of the East,” she helped bridge the divide between Jews and Arabs. Achinoam Nini, Yemen Blues, and other mainstream Israeli bands, as well, merge Yemenite tunes with melodies from Israel, the West, and other places around the world.

In their appeal to “Arab ears,” Gaar Adams points out in an article in Foreign Policy that “A-WA is seeking fans in a market where even the slightest hint of Israeli involvement in a commercial project could incite boycotts.” But the sisters have fans everywhere, including Muslim countries. “Lots of Yemenite people feel proud that we preserve the culture. Not only in Israel, but also in Yemen, both Jews and non-Jews,” said Tair. The Facebook group “Mipsterz—Muslim Hipsters,” which has over 12,000 followers, featured the “Habib Galbi” music video a few days after its release.

“It’s amazing that people know that we’re from Israel, and still, they like the music, and they feel connected and they enjoy it,” said Tair. “We feel like our music is sort of a bridge to connect people from Arab countries and from Israel and from all over the world. They relate to the music, the groove, and the story of liberation.” 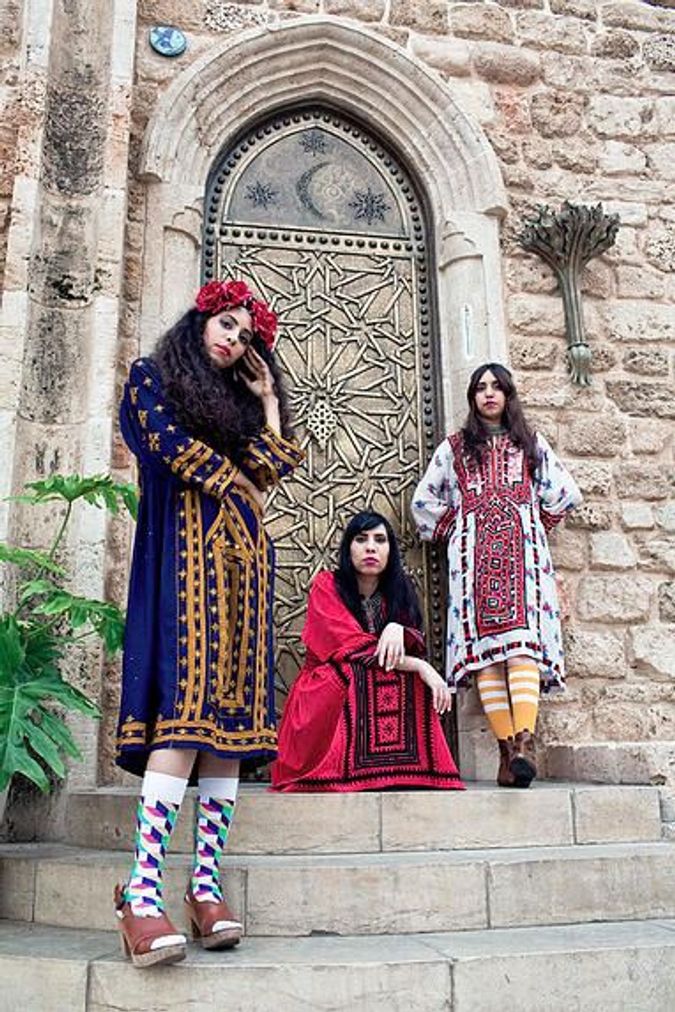 Image by Courtesy of A-Wa

“Habib Galbi” is a song about freeing yourself from the chains of a bad relationship, the Haim sisters say. With lyrics such as, roughly translated, “My love, my eyes, who turned you against me? who will hear me cry?” the sisters have transformed a sad story into an upbeat hit. “I think that the music video is completing another angle of the story that you don’t find in the text,” said Tair. “We do something with that, we free ourselves, we take this Jeep and we drive away into the desert.” Featuring 12 songs, including “Habib Galbi,” inspired by Yemenite folk music and poetry, their first album debuts this summer.

“[A-WA] is sort of a calling… It’s like yalla, let’s celebrate, let’s have fun. It cheers you up,” the sisters explained, finishing each other’s sentences. “I really love that people would come to us after a concert,” said Tair, “and say, ‘I didn’t understand a word but I don’t care because the music was so moving and it somehow touched me and I couldn’t stop dancing.’”