The Wagner Opera That’s OK for Jews To Love 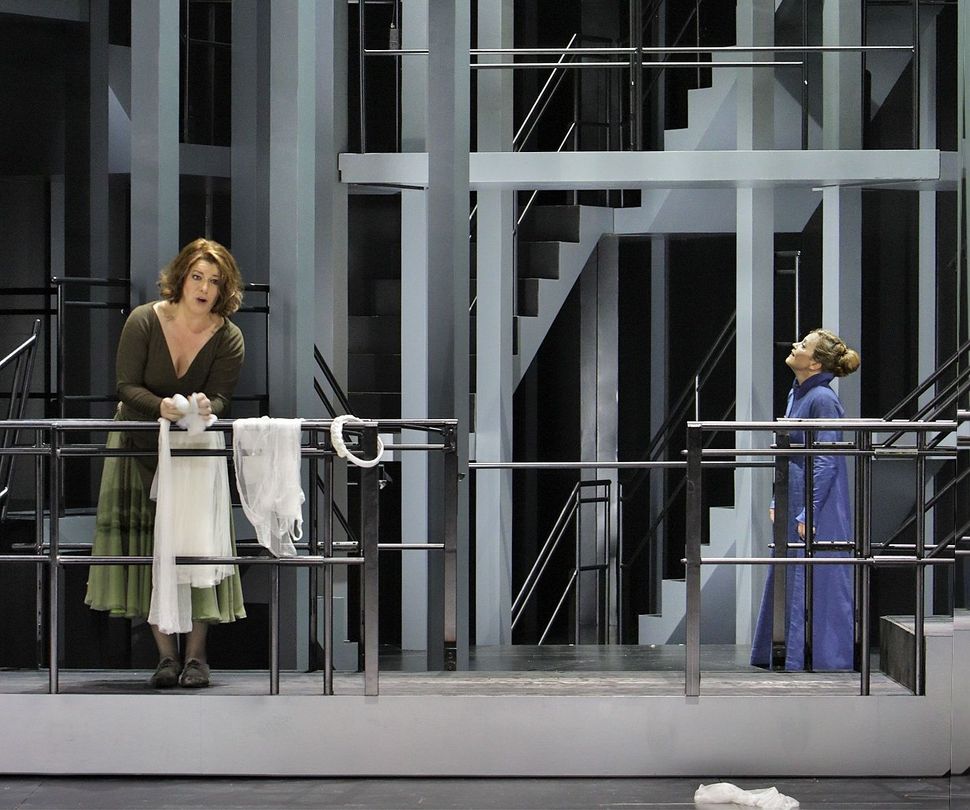 In 1981, Zubin Mehta sent shockwaves through Israel by leading the country’s premiere orchestra, the Israel Philharmonic, in a concert encore by Richard Wagner. It was the first time since the establishment of the State that the notoriously anti-Semitic composer’s work had been heard live in Israel. Despite the fighting and shouting in the auditorium, Mehta and the musicians made it through to the end of the piece.

Twenty years later, the Israeli-Argentinian conductor Daniel Barenboim once again challenged Israel’s unofficial ban on the composer, during a visit of the Berlin Staatskapelle to Jerusalem. Once again using the encore slot for Wagner, Barenboim first initiated a discussion with members of the audience on the appropriateness of performing Wagner in Israel. Many in the auditorium, including Holocaust survivors, argued pro and contra. After half an hour of debate, the remaining audience was treated — or subjected, depending on your point of view — to a performance of the same piece that Mehta had performed two decades earlier. In both cases, the encore in question was the “Prelude” and “Liebestod” of the opera “Tristan und Isolde,” the work that opened this year’s Bayreuth Festival (in honor of the work’s 150 anniversary) in a new production staged by Katharina Wagner, the composer’s great-granddaughter and the festival’s director.

It is no accident that in both instances — the highest profile attempts to break Israel’s Wagner ban — the music chosen came from “Tristan.” Of the composer’s 10 main operas, “Tristan” is the only one that is free of problematic völkisch or religious elements. The theme of love makes the opera universal and sets it against the exclusivity of the ethnic, religious or racial communities that are formed in Wagner’s other works, including the monumental tetralogy, “The Ring” cycle, with its Teutonic gods, monsters and heroes, and “Parsifal,” his final work, which tells a story about purity through sacrifice, redemption, and the knights of the Holy Grail.

The “Tristan” legend is Celtic in origin (rather than Teutonic) and was popularized in medieval England and France before Gottfried von Strassburg wrote his version of what became one of Wagner’s main sources for the libretto. All of the versions of the “Tristan” legend (along with innumerable spellings of the protagonists’ names), feature the same constellation of characters: the Irish princess Isolde, her husband King Mark of Cornwall, and her lover, the Cornish knight Tristan.

In Wagner’s version, the two titular characters are sworn enemies until they fall under the spell of a love potion. Overpowered by its magic, Tristan and Isolde betray the king, with predictably tragic consequences. One would really need to bend over backwards to find in it anything that the Nazis could have used to bolster their racist, supremacist ideology. Without consciously meaning it, both Mehta and Barenboim seemed to be giving their audiences the message: This is the Wagner we can love.

Many of the claims about how centrally Wagner’s works loomed in the Nazi imagination are tenuous. It is often asserted that Wagner was Hitler’s favorite composer. But the same claim has also been made about Franz Lehár and Anton Bruckner. Then there is the cliché of Wagner’s music playing at concentration camps, as Jews were marched to their deaths. But there is little evidence for this. Indeed, for the Nazis, Jewish musicians playing “holy German music” would have been sacrilege. Popular Wagner excerpts like the overture to “Die Meistersinger von Nürnberg” or “Siegfried’s Funeral Music” were certainly performed at Nazi functions, but then again, so was Beethoven’s Ninth. Clearly many Nazis loved Wagner, but so did generations of Jewish artists and intellectuals from all over Europe, including Gustav Mahler, Arnold Schoenberg, Marcel Proust and even Theodor Herzl. In all, the claim of Wagner’s music having been the soundtrack of the Holocaust has been, at the very least, exaggerated.

What cannot be discounted, however, is the composer’s own horrendously anti-Semitic views and that elements of his music dramas fed into the cultural stream of German Nationalism out of which Nazism was born. In this sense, the general opinion of Wagner as treyf makes a certain amount of historical sense. But one could also consider “Tristan” his most kosher opera.

Every premiere at Bayreuth is greeted with a certain amount of fanfare, but this summer’s premiere of “Tristan” arrived at a particularly fraught time for the festival: Katharina Wagner, 37, recently succeeded in ousting her half-sister Eva Wagner-Pasquier from the festival directorship; the festival’s most recent installment of “The Ring” cycle, from Berlin director Frank Castorf, was hugely controversial and a critical fiasco; and the festival recently fired German performance artist Jonathan Meese from directing next summer’s premiere of “Parsifal.” Meese won international notoriety in 2013 for performing the Hitler salute during a performance in Mannheim, Germany. According to one report, the entire audience walked out of the performance, which also featured the artist simulating oral sex on an alien adorned with a swastika.

The German-speaking world, which is home to nearly one-fifth of all the opera houses on earth, has a not-entirely-undeserved reputation for vulgar Eurotrash productions. Bayreuth, whose patrons are on the whole more conservative — not to mention exclusive — than most, has been presenting outlandish stagings at least since 2004, when Christoph Schlingensief, the enfant terrible of German theater and film who died in 2010, directed “Parsifal” with time-lapse photography of decomposing rabbits. Since then, scandals have come to Bayreuth at regular intervals. In 2007, Katharina Wagner’s “Meistersinger” turned the work on its head by making its hero, the kindhearted cobbler Hans Sachs, into a cruel reactionary, and Sixtus Beckmesser, the pedantic critic often interpreted as a crypto-Jew, into a revolutionary yet misunderstood artist. And two years ago, Castorf’s “Ring” spewed forth its incoherent trail of oil and other fluids, making Wagner’s grand tetralogy look like a soap opera.

But given the taint of Wagner’s anti-Semitic scrawls and that the festival was once the Third Reich’s premiere cultural event, Bayreuth has been remained understandably touchy about sending the wrong message with its productions. In 2012, the festival dropped the Russian singer Evgeny Nikitin from “Der Fliegende Holländer,” after it was revealed that the baritone had once performed in a heavy metal band with a swastika tattoo on his chest. Katharina Wagner apparently secured verbal assurances from the recently-fired Meese that his “Parsifal” would not contain Nazi imagery, but that they would continue to harbor doubts seems understandable. A selection of Meese’s work dealing with Wagner, executed since he was given the ax and presumably as a way of working through this traumatic episode, is currently on view at the Sabine Knust Gallery in Munich. The festival cited budgetary and logistical concerns, but suspicion was immediately raised that Meese’s vision for “Parsifal,” the composer’s pseudo-mystical and racially-problematic work, was simply too envelope-pushing for a festival that, despite its recent irreverent forays, honors Wagner as a demagogue to this day. Or perhaps the festival simply wanted to avoid involving another director who would guarantee a scandal. If the new “Tristan” was any indication, the festival that will soon be completely in the hands of Katharina Wagner may be heading in a more traditional direction after a somewhat wild decade.

Despite its unexpected touches, Katharina Wagner’s “Tristan” was hard not to like. There were no decomposing critters or copulating alligators (to name one of the more inscrutable elements in the Castorf “Ring”), and the sets for the work’s three acts were consistently beautiful to look at. They also advanced a particular interpretation of the work that was unorthodox without being revolutionary.

In the first act, a series of M.C. Escher-like staircases separated Tristan and Isolde, whose frantic attempts to reach each other were thwarted by shifting platforms and steps that fell down like trap doors. In this production, the lovers required no love potion to unlock their passion for each other. Indeed, when the fateful moment came, they poured out the elixir — which in this staging seemed rather to be the death potion than the love potion, or possibly even a liebestod (or love-death) potion — on their clasped hands, using it to seal their union. The nighttime tryst of the middle act was set in a prison-like yard where the lovers build a makeshift tent to shield themselves from the blinding searchlights, which were supervised by a warden-like King Marke. In the third act, the dying Tristan cried out in delirium for his beloved, chasing the apparitions of Isolde that kept materializing and vanishing in triangular boxes flooded with blue light. The abstract, Robert Wilson-esque act was mesmerizing and bold, until at the very end King Marke grabbed Isolde by the wrist and led her away. She had just sung the “Liebestod,” a rapturous aria that describes a vision of the dead Tristan coming back to shimmering life. At the end of the aria, Wagner’s stage directions indicate that Isolde should sink lifeless onto Tristan and that Marke should bless the two corpses. A director disregarding stage directions is nothing new or inherently objectionable. Yet Katharina Wagner’s reinterpretation of the tragic figure of Marke as a manipulative mastermind trying to get Tristan out of the way in order to drag Isolde off seemed a baffling way to interpret the work, and one, I suspect, concocted mostly for novelty.

It remains to be seen which direction Katharina Wagner will steer the festival, now that she is the sole artistic director. In her years of running the festival with her half-sister, she made promising diplomatic overtures, as when she invited the Israel Chamber Orchestra to perform a concert during the 2011 festival. The following year, the festival opened a permanent outdoor exhibit called “Silenced Voices” about Jews who had performed in Bayreuth during the Nazi era, including several who perished in the death camps. During intermission at “Tristan,” I drank prosecco and nibbled lox canapés in the garden that houses the exhibit — as well as a massive bust of Wagner that was designed by Arno Breker, the go-to sculptor in Nazi Germany — with some young Wagnerians, while, unbeknownst to me, Angela Merkel had a dizzy spell and fell off her chair at the heavily-guarded restaurant next door.

The Wagner Opera That’s OK for Jews To Love