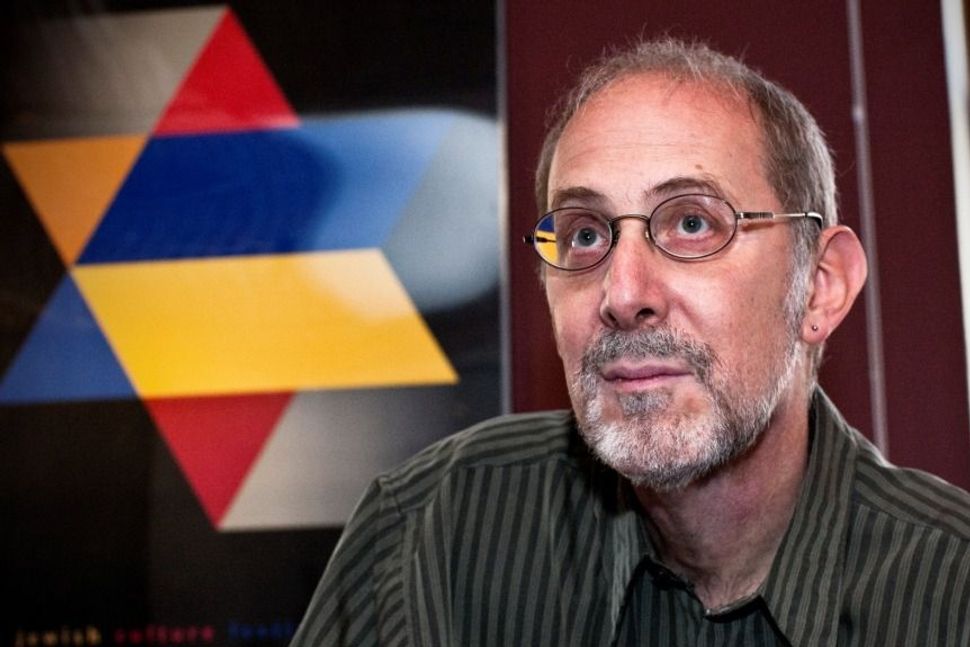 The scent of herring; owlish spectacles; dusty, tragedy-laden archives; scratchy vinyl records you wouldn’t want your friends to know about — these are the things one sometimes associates with Yiddish culture. For more than three decades, Michael Alpert has worked hard on preserving and reviving an Eastern European Jewish tradition that is precisely the opposite of the herring-infused stereotypes; one bursting with life, worldliness and sophistication.

Renowned for his work as an artist, ethnographer and educator, Alpert is a member of the seminal Jewish bands Brave Old World and Kapelye and has been a key figure in the klezmer revival since the late 1970s. It is thus entirely fitting that this October he will receive this country’s most prestigious award for folk and traditional arts, the NEA National Heritage Fellowship.

Unlike various other musical traditions that have been passed steadily across generations, klezmer is defined precisely through its lack of continuity. It is characterized by the abyss that separates contemporary klezmorim from the once-blossoming musical culture of Eastern Europe. Today’s klezmer is necessarily reimagined — that is, recast into new life, not only by means of preservation of the music itself, but also through artists’ ability to wrap the inherited music in their personal dreams and aspirations and, above all, in storytelling.

“I was lucky as a kid,” Alpert tells me. “I grew in junkyards, and in contact with not only other Jews, but lots and lots of other people, a lot of dust-bowl immigrants to South California — Croatians, Italians, Armenians, Japanese, Mexicans.” To sift the junkyard childhood for luck, narrative, and music, and to distill it into a cultural foundation, which can be passed on to a slew of students and listeners — that surely is a property of not merely an artist, but a tremendous, influential storyteller.

Alpert’s story is not one of sentimental preservation of the near-vanished world, but rather that of imagination, as well as a profound cultural and historical critique. “I’m not just a Jew,” Alpert told me when we sat down to chat on the cozy veranda of the small home in Santa Cruz, California, where he’s staying for the summer. “I’m an American, I’m a Californian, I’m a man, I’m a hippie, I’m countercultural, I’m political, I’m a West Coaster who became an East Coaster, I am all of these things. To be an Ashkenazi Jew, you have to be able to move within a variety of worlds. And I would say that’s been true of Jews in general for probably thousands of years. It’s a remarkable thing.”

Klezmer is a nomadic music filled with culture-traversing reverberations of the Balkans, Eastern Europe and the Middle East, as well as the intermingling flavors of Africa and Western Europe. Like his music, Alpert is the consummate traveler; he plays multiple instruments and is conversant in more than a dozen languages. He did not inherit his vision of the Jewish musical tradition from his family or the community he grew up in; he gradually shaped it, bridging disparate pieces, thriving on frictions. In the late 1970s, when he first attempted to play klezmer, he experienced a pivotal moment while driving home with his friend and bandmate Mark Samos.

“Here’s this music that’s supposed to be ours,” Alpert recalled himself thinking, “and yes, I identify with it in a certain way, but we don’t know how to play it anywhere near as well as, say, I know how to play Serbian music, or Croatian music, Macedonian music, or Irish music. I said to Mark: ‘I feel that I don’t totally belong in the world of all this other stuff, and here’s this stuff that’s supposed to be ours and I don’t feel like I don’t belong here. I’m not sure where I do belong.’ I really hit the bottom there. And Mark said: ‘You know, Michael, that’s probably the most Jewish feeling I can imagine.’ And that was — ping! — the beginning of an upward climb. And I realized, ah, right… that’s why. That experience took me through many years.”

This early peak experience, now a part of Alpert’s personal mythology, is telling. Ambivalence about one’s Jewishness is a well-worn artistic trope of modernity. Yet, one’s ability to treat this ambivalence with much-needed complexity, as an opening for an identity that is both ancient and apt for the 21st century, is an impressive feat. To Alpert, to be engaged with Yiddish culture is to treat it not as a box in which to enclose one’s identity, but as an opening out of which to gather the various strands. And perhaps that’s precisely what draws so many students in North America and Europe to Alpert’s classes and concerts — and to a whole slew of well-attended, popular festivals, workshops and concerts focused on exploration and reinvention of the Yiddish culture of which Alpert is a part.

To Alpert, be involved in Yiddish culture, in its contemporary transnational permutation is to understand that “it encourages a larger perspective on what it means to be a human being in the world.” It’s worth reviving a culture for that message alone.

Jake Marmer is a poet, critic and educator.