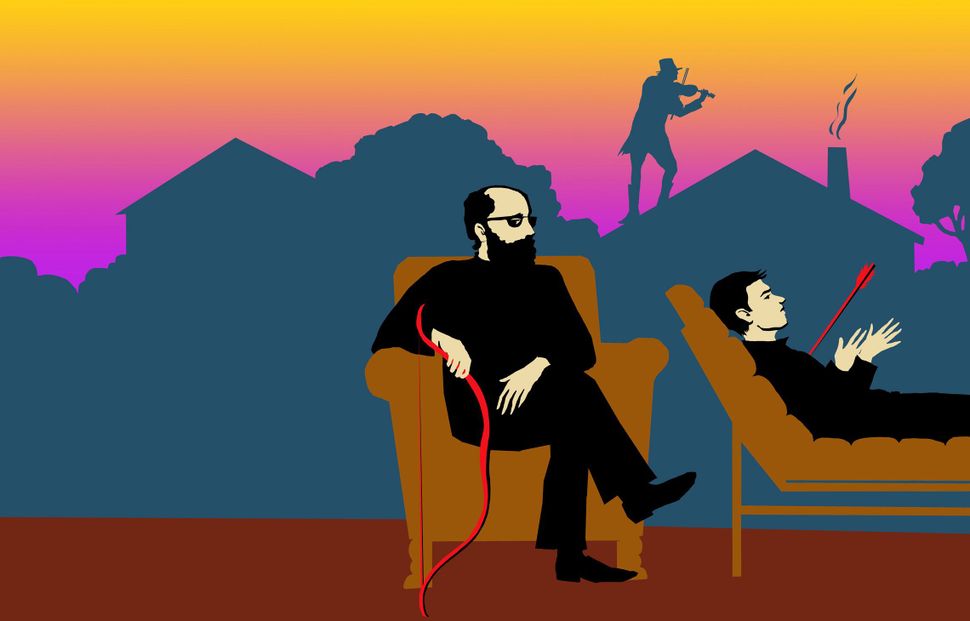 As I walked into Mendy’s on 34th Street on a recent Friday night to attend a Shabbat dinner for the Broadway cast of “Fiddler on the Roof,” I felt relieved that I’d successfully avoided a run-in with my ex-boyfriend, who lives in the neighborhood. He ended our three-and-a-half-year relationship this past summer and began seeing someone else right away. I felt self-conscious wandering near his apartment.

Inside the restaurant, five long folding tables had been set up, and I chose a seat in the center of the middle table.

A little past 6:30 p.m., the chairs had filled and Sheldon Harnick, the 91-year-old lyricist for “Fiddler,” which begins previews on November 20 at the Broadway Theatre, arrived. The entire cast began clapping and hooting. Some stood up. A man ushered Harnick and his wife, Margery, to the empty seats right across from me.

The two scooched in and Harnick removed his navy “Fiddler” baseball cap and tan coat. I’ve seen “Fiddler” a couple times, but not since my childhood. I consider it a classic production, particularly for the simplicity of its sing-along songs, which I listened to on a cassette tape in the ’90s.

At the bare minimum, I’ve always thought of “Fiddler” as a play about love. It’s also about defying conventions, among many other themes, but mainly love. After the red wine had been poured, the blessings sung and everyone stopped shouting “L’chaim!” the conversation turned to courtship. One of the actors, Michael Bernardi — the son of Herschel Bernardi, who played Tevye on Broadway in 1971 — asked Harnick and his wife how they had met.

I met my ex-boyfriend at a party a few months before we graduated from college. We had mutual friends who thought we would make a good match and helped set us up. It turns out they were right, and despite the fact that on our first dinner date he ate the sushi with his hands, I began skipping class for the first time in my life to watch “Saved by the Bell” reruns with him.

Fifty-five years earlier, Harnick said, he and Margery became friends. They were both married at the time. Margery, whom Harnick calls Marge, insisted it was the reason their relationship worked: friends first.

At the time, Harnick had been seeing a therapist. During one session, he spoke of Margery and the therapist said to him, “Whether you know it or not, you’re in love with her.” Harnick paused to reenact his surprise and widened his eyes under his magnifying spectacles. Margery leaned her head on his shoulder. But back to the story: With this revelation, Harnick called Margery’s best friend, who told him, “You better woo her.” He did and they married five years later.

The couple beamed across the table at Bernardi who plays Mordcha the innkeeper, and me. Around us, conversation buzzed about Israel and whether certain stories in the Torah were true, while Bernardi lamented the fact that he couldn’t seem to find the right woman, even after living with one, and then trying to be friends afterward. Dating in New York is hard.

After six weeks of trying, I finally have a first date this week, and one I’m excited about. So far, someone has stood me up, a man twice my age wearing a dirty Mets bomber jacket asked me out on the 6 train while our fellow commuters eavesdropped and a guy I met at a bar smelled like Lays Barbecue chips.

I was lost in thought about my own recently concluded relationship, and how it was the longest and closest I’d ever had, when Margery turned to me and asked if I was married. “No,” I said. “I just got out of a long-term relationship.” She and Harnick nodded.

The waiters came to clear our plates of chicken and gravy — Harnick had accidentally knocked over a glass of wine onto his and the food swam in a puddle — and people got up to mingle. Margery and Bernardi left the table to chat with friends, and I found myself alone with Harnick. He asked me to pass the bottle of red.

“It’s always a good time if there’s wine,” he said as he poured out the last drops. I started to ask him a question, but he interrupted to inquire how long I had been in a relationship for.

I thought about his 50-year marriage.

“Not really,” I replied.