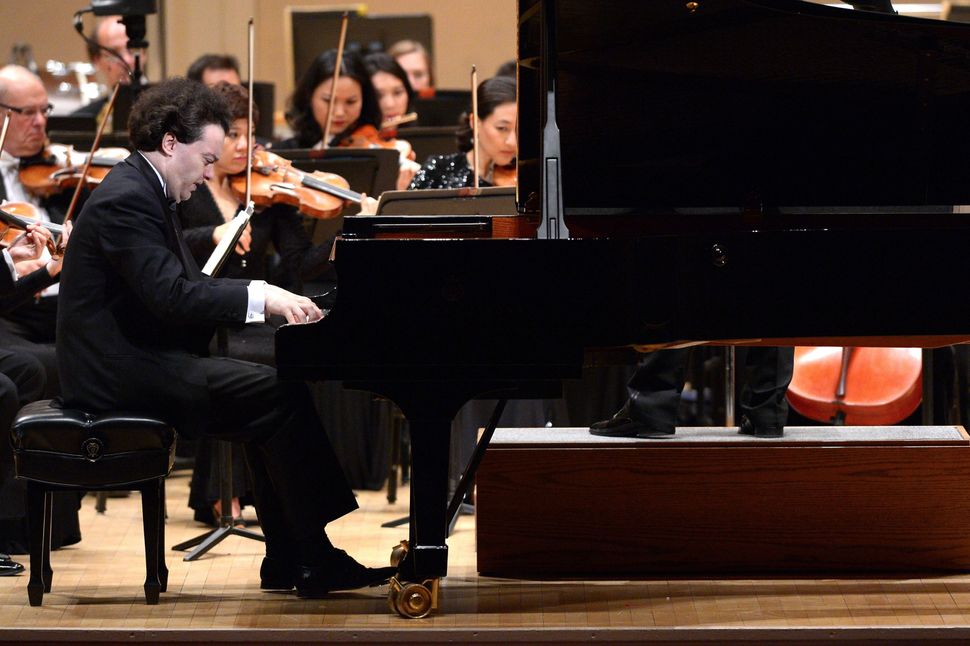 In a poem Evgeny Kissin wrote in Yiddish, he looks forward to the Jewish program he’s set to perform on December 16 at Carnegie Hall: In Kenedi-Tsenter af yidish hob ikh shoyn geshalt, / un opgeshatst hobm es hoykh i a yid, i a goy / Kh’vel es ton in kumendikn yor oykh in Karnegi Hol…

For the uninitiated, it says: “I’ve spoken in Yiddish at Kennedy Center already. And it was highly praised by both a Jew and a Gentile. I’ll do the same next year in Carnegie Hall.”

Kissin’s pianistic power with the languages of Beethoven and Chopin isn’t news. Word that he’s a one-man Yiddish Pride Movement has spread more recently, especially since he appeared at the Kennedy Center in 2014 for a program of music by Jewish composers and poems by the classic Yiddish poets Chaim Nachman Bialik and I. L. Peretz. He declaimed them by memory, his speaking voice an instrument both rich and, at times, hauntingly tender.

The poetry at Carnegie Hall will focus exclusively on Peretz [Editor’s note: The Forward has produced several Kissin CD’s including “Don’t Think That the World Is a Tavern,” featuring Kissin reading Peretz’s poetry]. The musical part will showcase one well-known work — Ernest Bloch’s shimmering piano sonata — and solo piano pieces by Alexander Krein (1883-1951) and Alexander Veprik (1899-1958). Krein’s work reflects the influence of Scriabin, whom he knew; Veprik’s is more Bartok-inflected. Krein and Veprik stood out in a movement that braided Jewish influences with modernist craft, which surged briefly before and after the Revolution — before yielding to Stalin’s institutional anti-Semitism.

The program reflects Kissin’s deepening commitment to sharing Yiddish culture. It already embraces the Yiddish poems he composes, 12 of them available on his website: www.kissin.dk. The site includes a CD of him reading Yiddish poems, and displays the poems — by Yiddish greats Bialik, Abraham Sutskever and others. There’s also prose by Kissin, including short fiction, as well as other writers and journalists. Several pieces assert support for Israel — the pianist recently became an Israeli citizen to show it — and for Vladimir Putin’s opponents. In a recent poem, given in Yiddish and English, Kissin writes a personal-feeling elegy for leading Putin critic Boris Nemtsov, lamenting with outrage the popular dissident’s assassination near the Kremlin in February 2015.

In an email (due to his busy schedule, Kissin prefers email interviews), I asked Kissin whether his poem stemmed from knowing Nemtsov, and his grief for the Jewish-born activist’s loss became especially moving when he answered: “As for Boris Nemtsov, of blessed memory, I only met him once, so regretfully there was no relationship between us.”

On Sunday, December 6, Kissin performed in a program at YIVO exploring Yiddish music during the Soviet era. With videos and film clips, it drew from pieces on a new CD — “Songs with a Jewish Flavor”— in which he collaborates with other artists. Part of that project — and the performance — was Boris Sandler. Kissin wrote me that he’s friends with Sandler, editor-in chief of the Yiddish Forverts. Sandler has edited the pianist’s Yiddish literary efforts (recast in English by the New York-based translator Barnett Zumoff). Kissin even evokes Sandler in a poem, in lines that recount how “a nice lady” he meets on tour to Iceland asks if he knows Yiddish. The pianist-poet decides, “I’ll call Boris from Iceland” and “let the colorful sparkle of Yiddish illuminate the air!”

Giving commentary at the YIVO event was Gennady Estraikh, an NYU professor of Yiddish and Jewish history. Kissin, who travels widely but maintains an apartment in New York, wrote me that time with Estraikh, “helped me in my Yiddish studies at a time when I already had some knowledge of Yiddish, but still didn’t understand certain things.”

Estraikh said in an interview that when he met Kissin about 14 years ago, “his knowledge of Yiddish was modest, but it has developed into something remarkable. When I read a poem by him, it is with the impression it was written by someone who has spent years and years in his studies of Yiddish. It has no mistakes. It is absolutely grammatically correct. In the beginning, we spoke Russian together, and now we speak Yiddish.”

The Yiddish fluency Kissin honed through adult effort grew from emotional roots in childhood visits to now-deceased grandparents outside of Moscow, where he was born in 1971 and where his rise as a prodigy began. In his poem titled “My Grandmother-Tongue,” Kissin recalls that Yiddish “rang out in the dacha,” and brings back his “grandma Rachel saying to me: ‘Farmakh di tir!’ (‘close the door!’).”

Kissin has performed Yiddish poetry before, and his website has videos of him reading at the Verbier Festival, in Switzerland, in 2006. But the sold-out Kennedy Center event took it to a new level. The project grew from a meeting with Charles Krauthammer, the conservative pundit, at a reception in 2008. Krauthammer and his wife, Robyn, had developed a group called Pro Musica Hebraica, to produce concerts of music by lesser-known Jewish composers. But the Washington Post columnist recounted that he first spoke with Kissin about their mutual political zeal for Israel.

“We had this immediate affinity for things Jewish and political Zionism, and I guess he knew me as a writer,” Krauthammer said. “Since then, I have seen him maybe four or five times, but we’ve had these extended but sporadic email exchanges, and Robyn had the idea of this concert. It was her idea and it is mostly her doing, though she’s too modest to say so.”

The pianist started by being “politely, charmingly resistant to this idea,” and made clear he’d only play music he considered “worthy as music, not merely because it had been written by Jews,“ Krauthammer said.

Pro Musica Hebraica, helped by a scholar of Jewish music history named James Loeffler, sent Kissin piece after piece to consider. It took about a year until he decided the Krein and Veprik works were “worth memorizing, worth attaching his reputation to,” Krauthammer said. In an email, Kissin said he knew of Krein, but Veprik was new to him.

The poetry part of the hybrid came more easily, given Kissin’s strong attachment to Yiddish literary culture and self-described “regular” reading of poetry in general, from Keats to Marina Tsvetaeva. By all accounts, his ability to convey the wide range of feeling in Yiddish poetry is thoughtful and expressive. But who better to ask about the chance to hear Kissin recite Peretz than another Peretz? Martin Peretz, the former editor of the New Republic, said he and the famed author are related through his great-great-grandfather, one of the poet’s brothers. The familial tie is evident the moment Martin Peretz starts to talk about his Yiddish-steeped youth in the Bronx and his work shaping a recent YIVO conference to honor his forebearer’s 100th yahrzeit.

Peretz has tickets to Kissin’s December 16 recital and was at the December 6th concert at YIVO, where he’s a trustee. “I think (the Carnegie reading) will be a reminder of the clarity that Peretz brought to his poems,” he said. “He envisions a better world, but he’s not sentimental. I don’t think that Kissin traffics in warming the heart. This will not be an exercise in nostalgia.”

At 76, Peretz lives in Manhattan and is writing a memoir. But Kissin also has younger admirers, ones for whom his public Yiddish interest mirrors the focus of some younger Russian-born and American-born Jewish performers. I spoke with Eve Sicular, who leads the New York-based Klezmer group Metropolitan Klezmer, Anna Shternshis, a University of Toronto Yiddish studies professor, and Yelena Schmulenson, a Russian-born actress who lives in New York. All spoke of their growing awareness of Kissin’s presence on the Yiddish scene.

Schmulenson, who acted in the shtetl prologue of the Coen Brothers’ film “A Serious Man,” said she was in a Yiddish-language staging of a Sholom Aleichem piece not long ago on the Lower East Side, and felt “eyes burning into me through the audience.” When the lights went up, there sat Kissin. “I could tell because he has that wild hair, you know? He came up to me afterward and told me how much he liked it—in Yiddish. That he should take such a strong interest in Yiddish and expand his presence in the world that way is something I have noticed and I think others are noticing, and I applaud it. It is encouraging.”

I emailed Kissin about Schmulenson’s account, and asked if he is consciously making himself a model to encourage other people in their fervor for Yiddishkeit. His tone was modest, but he stated a clear sense of purpose: “I am not consciously making myself a model for anybody; such an idea would never come to my mind. But I am trying to promote Yiddish and the Yiddish culture.”

However, he pointed out, the core of his life remains music. “If one wants to understand me as a human being,” he wrote, “the first and main thing one needs to do is to listen to my music, because I am all in it.”

Still, in “Yiddish,” the title of one of his poems that extols the language, he wonders if his drive on its behalf is becoming extreme: Mir dukht zikh, mistame ver ikh a bisl meshuge…nor s’helft dokh a mol meshugas!

“It seems to me that I’m probably getting a little crazy,” the poem allows, but “sometimes craziness helps.”