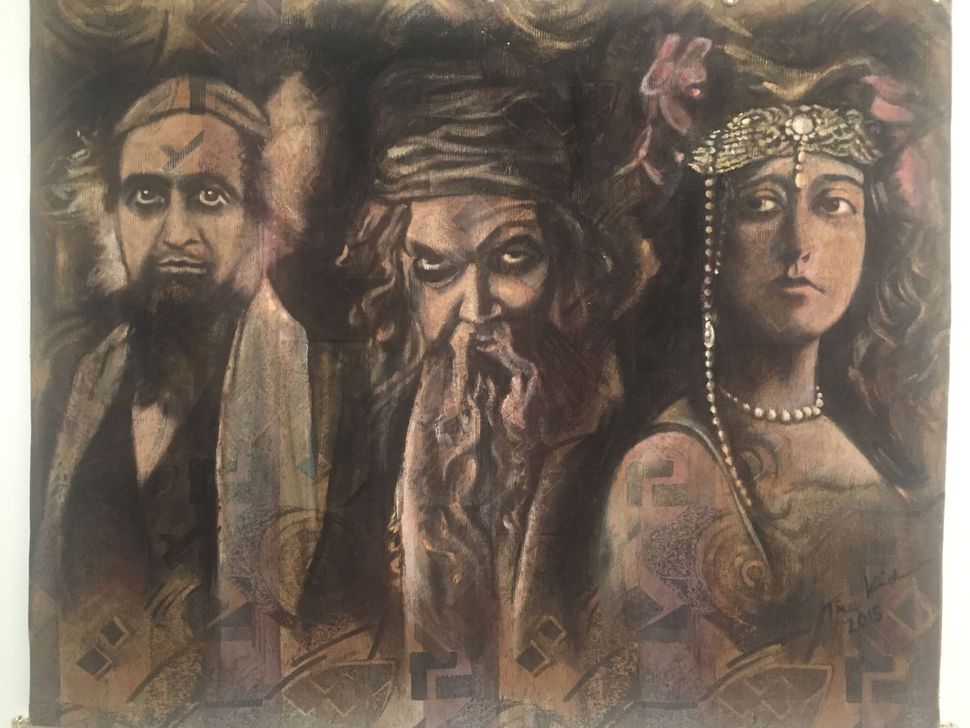 During a week in which one can attend a revival of a Yiddish language musical from the golden era of Second Avenue (“The Golden Bride” by the National Yiddish Theatre-Folksbiene, at the Museum of Jewish Heritage through January 3); or enjoy a critically acclaimed updated Broadway staging of “Fiddler on the Roof,” the musical that almost singlehandedly sparked the revival of interest in Yiddish language, culture, and klezmer music following its triumphant opening in 1964; and when discussion of the meaning of a single Yiddish word uttered by a presidential candidate has sparked dozens of stories, commentaries, and essays exploring the Yiddish language throughout the national news and social media, it seems almost unnecessary to devote a long holiday weekend expressly to “Yiddish New York.” After all, who needs a “New Festival Celebrating Yiddish Music, Language, and Culture” on the Lower East Side when seemingly everywhere you turn New York has once again become Yiddishland?

But in an odd or serendipitous confluence of cultural events, the first-ever Yiddish New York festival — a kind of successor event to the late, lamented annual KlezKamp, which ended its 30-year run in the Catskills last December — kicked off on Wednesday night with the opening of a new visual arts exhibition, “The Jew as the Other,” at the Abrazo Interno Gallery in the Clemente Cultural Center, at 107 Suffolk Street on Manhattan’s Lower East Side (on view through December 30). The festival, which runs through Tuesday, December 29, and is based mostly at the 14th St. Y and the adjacent Town and Village Synagogue, includes lectures; walking tours; instrumental klezmer classes; dance workshops; films; children’s programming; crash-courses in Yiddish theater, language, and song; and special evening performances featuring top names in Yiddish music, theater, and comedy. (The Forward is among about a dozen organizational sponsors.) It’s a veritable immersion in Yiddish culture and the arts, for beginners and experts alike.

KlezKamp is a hard act to follow. It was an integral and hugely influential element of the Yiddish and klezmer revival. Several generations of musicians and Yiddishists came up through the ranks, from the children’s programs up through the instrumental classes, so that today such prominent klezmers as clarinetist Michael Winograd (who is one of the festival organizers and teachers) and violinist Jake Shulman-Ment – proteges of Merlin Shepherd and Alicia Svigals, respectively – and Yiddish critic/playwright Rokhl Kafrissen provoke wonderment among old-timers (such as myself), who can say “I knew them when.”

KlezKamp also functioned as a solution to the familiar dilemma of many a Jewish family: what to do during the week when the rest of the world seems to shut down for the celebration over the birth of he-who-didn’t-rise-and-he-who-didn’t-fly, leaving us little to do other than eat Chinese. Instead, we could pack up and head to the Catskills, in the tradition of our fathers or grandfathers, and become part of a community that lives on in friendships formed, musical ensembles born, marriages made (as in the case of Yiddish New York’s director, Pete Rushefsky, head of the Center for Traditional Music and Dance, who met his now-wife, musician Madeline Solomon, at KlezKamp), and books written (as in the case of my own “The Essential Klezmer: A Music Lover’s Guide to Jewish Roots and Soul Music,” very much inspired by the music heard and relationships formed during my years attending KlezKamp in the late-1990s and early-2000s).

This new, non-residential version of or successor to KlezKamp is an experiment, although on the evidence of the large crowd that turned out for the opening reception of “The Jew as the Other” – at which I bumped into KlezKamp friends from as far away as Virginia whom I hadn’t seen in 15 years or so – KlezKampers may simply be unwilling to forego the tradition of how to spend this week by attending Yiddish New York, even if its intention is to serve a mostly city-based audience. The exhibition, curated by Tine Kindermann, Deborah Ugoretz, and Yona Verwer, offered a sampler of provocative contemporary work in painting, photography, sculpture and video that explores aspects of Jewish identity and “otherness,” such as Kindermann’s monumental painting of Nathan the Wise, Shylock and Salome; Ugoretz’s “We Love Our Shul,” a pointed parody of the stereotypes embedded in Manhattan Mini Storage’s subway ads; Anya Roz’s modern-day representation of Judith as a terrorist beheader of Holofernes; and Daniel Toretsky’s fascinating video exploration of the architectural interplay of the Roman ghetto and its surroundings through the centuries.

You could pinch me if I didn’t feel, for at least a few moments, like I was in an alternative universe – a Yiddish New York.