Glenn Frey and the Secret Jewish History of The Eagles 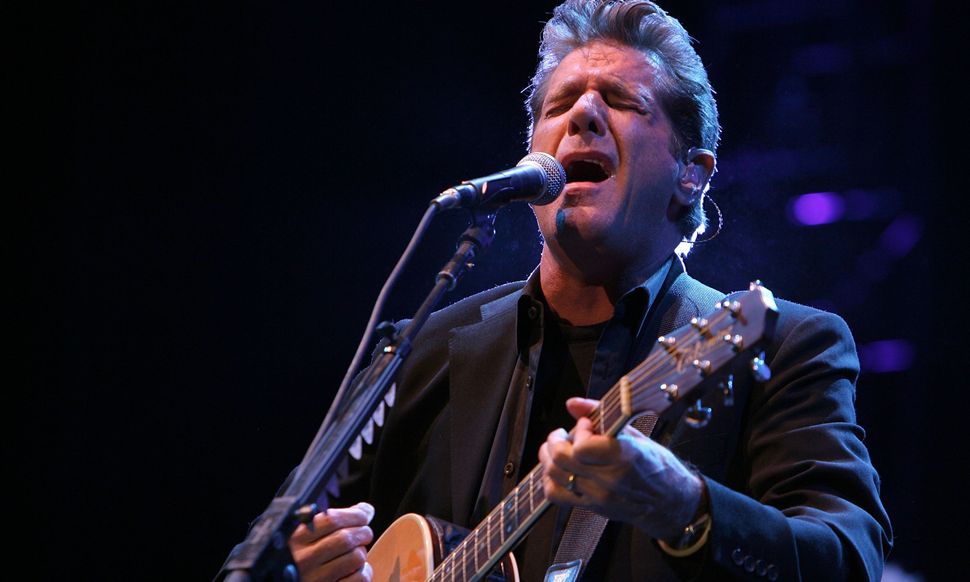 The death of rock singer Glenn Frey, a cofounder and leader of the Eagles, marks an end to one of the longest running and most successful bands of the rock era. Critics have always noted the somewhat acerbic, downright cynical attitude running through many of the group’s best-known songs. But perhaps overlooked has been a narrative running through the band’s work from its very beginnings through its final recordings that suggests a deep spiritual struggle fueled by an engagement with Biblical figures and imagery.

It shouldn’t be lost on listeners that even the Southern California band’s name, Eagles, takes its inspiration from a mighty symbolic figure. In Exodus 19:4, God says to Moses, “You have seen what I did to the Egyptians and how I bore you on eagles’ wings and brought you to Myself.” Isaiah echoes God in 40:31, when he says to his people, “… those who hope in the Lord will renew their strength. They will soar on wings like the eagles.”

Not all Biblical references to eagles are filled with such glory, however. Sometimes eagles are portrayed as fierce and tireless predators — such as in Habakkuk 1:8: “Yea, their horsemen come from afar, they fly like an eagle, swift to devour” — which suits the group’s more mercenary and combative image. Equally as significant, the eagle is one of just a few choice birds singled out for non-kosher status: Deuteronomy 14:12 states, “And these you shall regard as an abomination among the birds … the eagle, the vulture, the buzzard.”

Then again, in Proverbs 30:18-19, the flight of the eagle is ranked among the four enigmas too perplexing to understand, foreshadowing the dilemma of many a rock critic — who as a species unto themselves tend not to shine favor upon the Eagles, as they eternally behold the group’s phenomenal appeal in spite of what they often judge to be a dearth of talent and artistry.

It is in the songs written and recorded by the Eagles themselves, however, where one traces an open-ended conversation – a recurring dialogue with scripture, perhaps – that betrays a spiritual worldview that one more typically associates with rock artists including U2, Leonard Cohen, and Bruce Springsteen.

For example, the group’s eponymous debut opens with their breakthrough hit, “Take It Easy,” which begins, “Well, I’m running down the road tryin’ to loosen my load / I’ve got seven women on my mind; Four that wanna own me, two that wanna stone me, one says she’s a friend of mine.” The most famous group of seven women in history were of course the seven women prophets of Israel: Sarah, Miriam, Deborah, Hannah, Abigail, Huldah and Esther. Note the very Biblical punishment two of them want to inflict upon the narrator.

Another hit from that debut album, “Witchy Woman,” can be read as a midrash on the story of Lilith, right down to “She held me spellbound in the night,” riffing on the Zohar, which says about Lilith, “She wanders about at night, vexing the sons of men and causing them to defile themselves.” The singer goes on to warn, “Let me tell your brother, she’s been sleeping in the Devil’s bed,” presumably a reference to the Kabbalistic belief that Lilith was the wife of the angel Samael, who is often thought to have been Satan in disguise.

(Note that a few years later, on the album “One of These Nights,” the Eagles revisit the character of Lilith in the title track, the group’s second number-one hit, when they sing, “I’ve been searching for the daughter of the devil himself / I’ve been searching for an angel in white / I’ve been waiting for a woman who’s a little of both,” which summarizes Lilith with taut poetic economy.)

Also on their first album one finds “Take the Devil,” which calls upon the listener to turn toward God in moments of temptation, loneliness, and desperation – an invocation that reads like a contemporary rendering of a psalm:

Open up your eyes, take the devil from your mind, he’s been holding on to you

And you’re so hard to find, the wind outside is cold

Restless feeling in my soul, tempting me to get away

But there’s no place a man can go

God, will you lead me where I roam?

A few albums later, the title track to “On the Border” finds the narrator contemplating conversion from Judaism to Christianity when he sings, “I’m out on the border, I’m walkin’ the line / Don’t you tell me ‘bout your law and order / I’m tryin’ to change this water to wine.”

The final song on the mega-selling “Hotel California” album, called “The Last Resort,” implicates the Protestant ideology of Manifest Destiny that fueled America’s initial colonization of the continent in the development of the industrial-based capitalism that destroyed the environment (according to the song’s lyrics, at least):

Just like the missionaries did, so many years ago/ They even brought a neon sign: ‘Jesus is coming’/Brought the white man’s burden down/ Brought the white man’s reign….And you can see them there on Sunday morning/ They stand up and sing about what it’s like up there/ They call it paradise, I don’t know why./

On the title track to “The Long Run,” the album that followed “Hotel California,” the narrator reflects upon time and survival amidst struggle, adversity, and centuries-long oppression, in lyrics that could be read as finding power in the love between the Jewish people and God:

You can go the distance

We’ll find out in the long run

We can handle some resistance

If our love is a strong one

People talkin’ about us

they got nothin’ else to do

When it all comes down we will still come through

In the long run.

And on the title track of the group’s final album, “Long Road Out of Eden,” the aging Eagles find comfort in their relationship with God the shepherd when they overtly nod to Psalm 23:

Moon shining down through the palms

Shadows moving on the sand

Somebody whispering the twenty-third psalm…

Behold the bitten apple – the power of the tools

And it’s a long road out of Eden….

And here I’ll stop, lest I take it to the limit one more time….

Seth Rogovoy writes about the hidden affinities between pop culture icons and Jewish themes for the Forward.

Glenn Frey and the Secret Jewish History of The Eagles