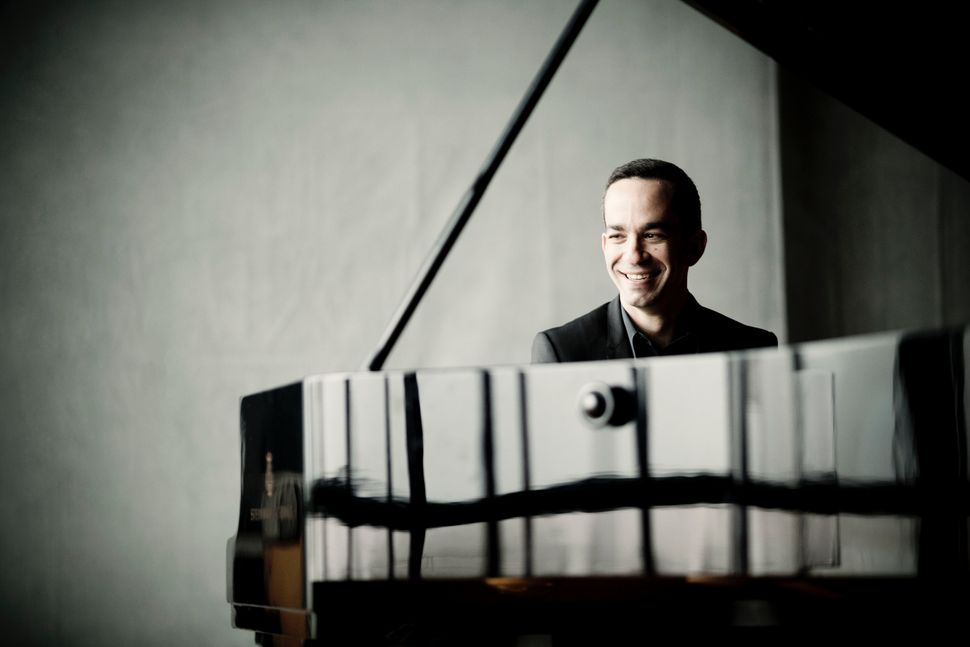 Critics aren’t liable for the headlines the copy desk gives to reviews, so no point chiding The New York Times’s James Oestreich for the burdened praise pinned on a rising Israeli pianist’s recent New York recital: “Inon Barnatan Soldiers Through Hallowed Works.” I winced, because the review itself described a “fascinating and rewarding” evening of playing that showed “spirit” and “stamina.”

Yet, the soldier image lingers when I think of how Barnatan moved through the last of his three seasons as the New York Philharmonic’s first artist-in-association, one of many innovations by the outgoing music director. Alan Gilbert. The conductor enlisted him as a sort of performer-adjutant, putting him into chamber music events and in front of the whole orchestra. Barnatan began with Ravel’s Concerto in G Major under Gilbert in 2014, and won praise last October for sensitivity with Mozart’s Concerto No. 23, led by Gilbert’s just-named successor, Jaap van Zweden, by casting the pianist as a bridge between two eras. On March 13 he joins Gilbert — the conductor as the violinist — in Olivier Messiaen’s “Quartet for the End of Time” at the Temple of Dendur gallery of the Metropolitan Museum.

Scoring his work for piano, clarinet, violin and cello, the French composer finished “Quartet” as a prisoner of war in the winter of 1941, in a German internment camp called Stalag VIII-A. The original clarinetist was a spirited Jewish prisoner named Henri Akoka, who would survive the war though his father died in Auschwitz. The work was premiered in a barracks hall filled with POWs from around Europe, both Jews and non-Jews. Glowing with Messiaen’s fervent Catholicism, the piece bristles with a universal sense of how civilization sustains itself in uncivilized times. The performance at the Met, ending Messiaen Week with the Philharmonic, will include principal cellist Carter Brey and principal clarinetist Anthony McGill, who e-mailed me that he is aware of Akoka whenever he plays the 50-minute piece.

Officially, the four men started rehearsing March 8, so it revealed Barnatan’s closeness to Gilbert when he told me the conductor had been up to his spacious apartment in a renovated Harlem warehouse for an unscheduled run through the work’s eighth movement, its last. Written for violin and piano, it is titled “Praise to the Immortality of Jesus.” I was there a day later, sitting with Barnatan beside his Steinway grand, imagining the two men playing those scorching last notes against his high white walls. “I hadn’t seen Alan for a while, and we played and then we talked,” said the pianist, who turns 37 the day before the Messiaen performance. “We talked about how the experience of playing the piece is as important as the piece itself.”

Barnatan and Gilbert, who was reached afterward by phone, echoed each other’s feelings about what that insight meant. They spoke of playing the piece previously — two times for Barnatan, more than six for Gilbert — and of their wonder at how rehearsing the last movement felt incomplete in comparison with the cumulative (both used that word) act of performing it after the seven other movements. In short, they’d shared a rehearsal reduced by contrast with memories of the whole work’s “vast” (Barnatan) “cosmic” (Gilbert) force. “It just doesn’t hit you until you’re in the hall performing,” Barnatan said.

Gilbert asserted, of the “very difficult” ending, “By the time you get there, you’ve lived through something so intense and so affecting that it colors the attitude you inhabit when you perform it.”

This vibrant feeling about music, inhabited by the two men, echoes the scope of a relationship that hasn’t drawn as much attention as others in Gilbert’s circle. He’s spoken of building a musical family, the “collectivity” in music making. His lack of the vanity often found among podium kings has brought Esa-Pekka Salonen to town as the composer-in-residence, and by filling the orchestra’s stage with operas, also conveys his sense of music as a society. With Barnatan, Gilbert gave a little-known artist who’d moved to New York in 2006 — born in 1979, he’s one of several fine Israeli pianists around his age working here these days — a new level of visibility.

Critics mention the artist-in-association status almost everywhere he goes, as if it were a gold seal of approval. “I was gob-smacked when I got the phone call,” he said of the call from his agent in 2014. Gilbert had been searching for a new way to give more continuity to how the orchestra interacts with young performers. “We hadn’t done stuff together musically,” he said, explaining his choice of Barnatan. “If you’ve been around long enough, you have an idea about what kind of musician will work well with yourself and with the situation. I liked the naturalness of his music making.”

Programs held in the Philharmonic’s digitalized archives show Barnatan’s gradual entrance into Gilbert’s world, starting with a February 2013 performance of a Mendelssohn piano trio with Gilbert’s mother, Yoko Takebe, since retired from the orchestra’s violin section. In June 2014, Barnatan, still not official, was chosen to play at a fundraiser in honor of retiring concertmaster Glenn Dicterow. Finally, on March 19, 2014, he made his debut with the Ravel concerto. When the position ends next season with a performance of Beethoven’s Piano Concerto No. 1, it will have included at least four programs with the full orchestra, at least three of them chamber music. A populist high point was Barnatan’s part as soloist in the annual New Year’s Eve program, in which Gilbert conducted the Philharmonic in Camille Saint-Saens’s joyously clever “The Carnival of the Animals.”

Barnatan and Gilbert both made a point of enjoying ordinary pleasures amid the pressures of music. Both have a sly dexterity with musical puns. Barnatan noted to me that Gustav Mahler was a “distant relative by marriage.” When I said that such details make good bar talk, he shot back, “Yeah, speaking of Bartok.” Gilbert, in his phone interview, told me the two are food lovers who have cooked together, that their get-togethers sometimes include duels about who makes the better espresso. “We call them Pro-coffee-offs,’” he said, laughing.

“I think we’re kind of kindred spirits,” Gilbert continued. “Inon’s interest in repertoire is voracious and wide-ranging, and if you look at his calendar, he’s playing a lot of different pieces. Others play one concerto or two in a season, but he’s ready for anything.”

Indeed, two days before I visited the slightly built pianist, he’d done Brahms’s Piano Concerto No. 1 with the Calgary Philharmonic, flying the day after we met to Northern Ireland for three performances of Beethoven’s Piano Concerto No. 3 with the Ulster Orchestra. On March 6 he was set to land in Germany for a solo recital before heading back for the Messiaen rehearsals. Then, he would go to a chamber music concert in Miami — Schnittke, Shostakovich — before an all-Bach program in Santa Monica. And, deep breath, he moves into April with performances of Aaron Copland’s relatively astringent piano concerto in San Francisco.

“I love that kind of diversity,” Barnatan said. “There are people who want to put you into a box, and I want to defy that. You know, I love Schubert. But I do a lot more than Schubert.”

He has, in fact, made two well-regarded Schubert recordings. He studied extensively with the late Italian pianist Maria Curcio — whose painful journey through the Fascist years included a famous refusal to perform for Mussolini — and with that steady explosion of musical intelligence named Leon Fleisher. Both were students of Artur Schnabel, a Viennese Hitler refugee who arrived in the United States already renowned for playing Schubert and much else with far-reaching powers of heart and mind.

I asked Barnatan if Schubert’s rhythmic spacing, which achieves existential poignancy in works like the Sonata in A Major, helped train him for how Messiaen brings silence into his work. “I will answer by quoting Schnabel,” Barnatan said. “‘There may be others who play the notes as well as I do, but I play the silences better than anyone else.’ I think of that all the time.”

Gilbert and Barnatan sound alike when describing the bridge between history and music in the Messiaen quartet. “It is a masterpiece and it came from torment and adversity, and from faith in the high powers of the spirit,” Gilbert said. “But it exists on a pure musical level.”

Barnatan said: “The mythology of the piece is important to absorbing the piece, but the music should exist separately. When you go into a museum, you are hit by the great art before reading the plaque.”

Philharmonic officials were unable to say what the fate of the artist-in-association post — or other Gilbert experiments — may be after van Zweden takes charge of the orchestra. But their artistic relationship seems as if it will endure. Messiaen brought Gilbert and Barnaton together outside the orchestra last summer, for a Santa Fe, New Mexico, performance of “From the Canyons to the Stars,” a massive 100-minute piece the composer drew from his vibrant impressions after a trip to the American West. They’ve also recently completed a recording together of the complete Beethoven piano concertos, with Gilbert conducting the Academy of St. Martin in the Fields.

Barnatan took the opportunity to talk about the recordings in order to critique a view of Gilbert put forward by some critics: that he was more effective at creating new approaches to how the orchestra performs as an institution and to how he serves as a conductor of new music than at being an interpreter of composers in the musical canon of the 19th century, despite strong reviews he’s gotten for many kinds of music. Though his temperament seems easygoing, Barnatan became intense on this subject.

“I have rarely played the concertos with someone who marries the insight of a great musician with scholarship the way Alan does,” he said. “People get this image of what you are. With the breadth of the things I do and he does, people want to assume that because you do many things, you can’t do one thing well. Every really good musician, and he is one, extends beyond what people think of him and what people expect of him. People cling to their preconceptions, and it takes a long time to cast that off.”