A Jewish Tribute to Prince, Holy Unifier of Spirit and Sex 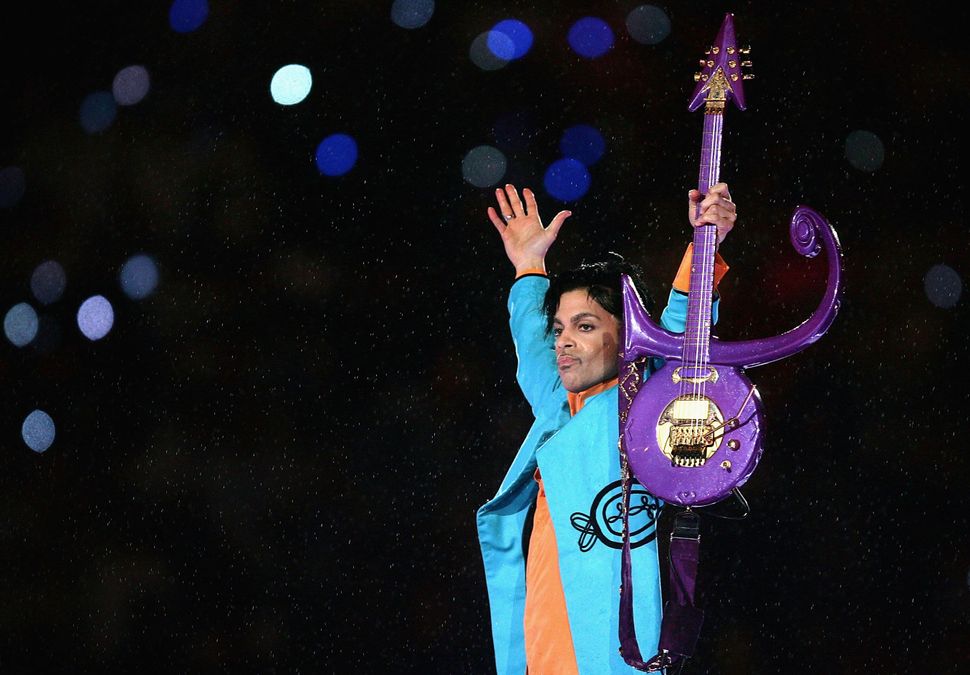 We get older when those we love — first parents, then peers and friends — pass away. Death becomes real, not an abstraction. Not only can it happen anytime; it does happen anytime.

I think that’s true when celebrities pass also. This year, Prince and David Bowie; not long ago, Michael Jackson and Whitney Houston. The stars of my youth are going out.

For rock stars, in particular, the shock is acute because they tend to become famous when they’re young — young and sexual. That was certainly true for Prince. Although he didn’t hit the big time right away (some of his funky, early music is absolutely worth a listen), when he did it, it was as sex incarnate. Leering mostly naked on the “Controversy” poster, singing risqué lyrics about Darling Nikki — it was like every parent’s fear about Elvis, Little Richard, or James Brown had come true with Prince.

Yet Prince also knew how to mainstream himself. His biggest hits were on the “Purple Rain” album, and tended toward the epic-guitar-hero Prince, rather than the erotically-grinding-funky Prince. (“Kiss,” from a later album, is perhaps an exception.) That’s where “Little Red Corvette,” “When Doves Cry,” and “Purple Rain” come from. That’s the multiplatinum Prince.

Not that he ever got tame. Some of Prince’s best music was on the so-called ‘Black Album,’ released unofficially in 1994 after the newly-religious Prince disavowed its frank sexuality. (One of his sexiest ballads, “When 2 R in Love,” included.) And there were plenty of sexual songs, sexual dance moves and sexual videos over the decades.

It’s amazing to realize that these 30-year-old songs can still be controversial today. Amazingly, a man who wants to undo the sexual revolution is the “saner” Republican candidate for president — and, by the way, the choice of most of Brooklyn’s Hasidim, voting en masse as directed by their leaders. I’ve never quite understood how Republicans can simultaneously dance to music like Prince’s and want to turn back the clock on the liberation movements of the Sixties. As if grooving to “Raspberry Beret” and supporting sexual and reproductive freedom are somehow separate things.

Prince himself spent decades trying to unite spirituality and sexuality, ethics and eros, in his music. The not-entirely-loved “Lovesexy” album was largely about the relationship between them, and while Prince’s religious ideas were sometimes bizarre and always changing, his lyrics reveal someone who saw eros as sacred — a kind of “Song of Songs” of the contemporary era, complete with explicit lyrics.

I asked a few friends who I know to be massive Prince fans for their thoughts. One of them — Adam Sher of Hazon — called him “the purple rebbe whose Torah was connection and love.” That is absolutely right, but not in a vague sense. “The love of god’s creation will undress u,” he sang on the song “The Ladder” — with its chorus about the spiritual search (“Everybody’s looking 4 the ladder / Everybody wants salvation of the soul / The steps u take are no easy road / But the reward is great / 4 Those who want 2 go.”) Those lyrics, like Prince’s more overtly sexual material, aren’t quite as well known as “tonight we’re gonna party like it’s 1999,” but they are, in many respects, more seminal.

I think that’s why another of my Jewish Prince-fan friends, Rabbi Aryeh Bernstein, who directs a teen Beit Midrash in Chicago, instantly connected Prince’s music to spiritual concerns. I can’t quote all of his encomium here, but here’s a sample, Princean spelling included:

For the love of God, the 5-foot Minnesotan has cut to the essence of the problem of sin: It is loneliness. When I sin against U, I am ruptured & alienated from U, from the suppressed, best, true version of myself, from humanity, & from God, the 1 Who always sees me in my potential goodness, no matter how far and how persistently I stray. This is the deepest loneliness. Dealing with guilt and brokenness is at its core about treating our alienation and restoring solidarity, about reviving the truth that we are 1 with our fellow humans and with our best potential. Part of me wants to jettison the traditional liturgy and just sing this on loop for an hour at Ne’ila, to close Yom Kippur.

Aryeh added that while he doesn’t do that entirely, he does use the melody to an even more obscure Prince song than the ones I’ve quoted — “There is Lonely,” from a collection of outtakes — as the tune for one of the prayers he leads on the Day of Atonement.

I think that’s what differentiates my spirituality, and those of friends like Aryeh and Adam, from that of the traditionally pious. Traditions often seek to regulate, repress and diminish the forbidden fruit of spiritual eros _ but for us, it is the source of our greatest spiritual strength. It’s dangerous, to be sure, since eros alone pays no heed to ethics, as we’ve seen in the numerous sexual scandals in the rabbinic world. That is precisely why earth and sky need one another. As the exact topic that Prince sang about, gyrated about, and appears to have lived for, the unification of spirit and sex — what William Blake called the marriage of heaven and hell — is the great spiritual task.

There are many Jewish metaphors for this work: the Kabbalistic yichud of the Holy One and the Shechinah; the two triangles of the Jewish star; the fertility symbols at Passover. It is also the redemptive joining of power and responsibility. As Aryeh wrote to me today, “We are not slaves to our bad habits or hurtful relationships. The way out of sin is the fundamental human posture: solidarity, responsibility, and love.”

I’m not sure Prince would put it that way, but I think he’d agree. With a funky beat behind him.

A Jewish Tribute to Prince, Holy Unifier of Spirit and Sex