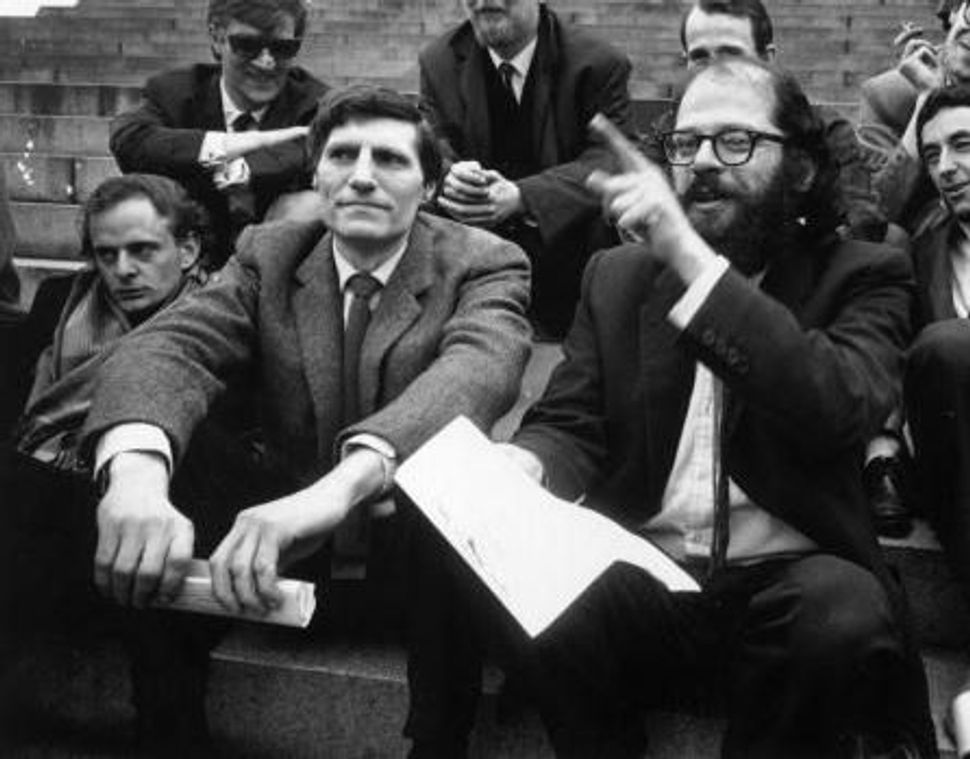 Let’s start right from the beginning by getting this out of the way: Allen Ginsberg was no Bob Dylan. But Bob Dylan is no Allen Ginsberg, either. However, the funny thing is that the two of them, each top in his chosen field, seem to have had aspirations to be the other.

Dylan’s man crush on Ginsberg is well known: Ginsberg plays a bit-part in the music video for “Subterranean Homesick Blues,” which opened D.A. Pennebaker’s Dylan doc, “Don’t Look Back”; Dylan’s mid-1960s psychedelic lyrics were obviously influenced by Ginsberg’s first-thought, best-thought approach in his iconic poems “Howl” and “Kaddish”; Dylan and the musicians who would become The Band recorded a jovial tune, “See You Later, Allen Ginsberg,” in the basement of Big Pink in West Saugerties, N.Y., in 1967; and Ginsberg had a featured role onstage on Dylan’s shambolic “Rolling Thunder Revue” tour in 1975-76, as well as significant screen time in “Renaldo and Clara,” the four-hour-plus, Dylan-directed feature film recorded during the tour.

It seems to have worked both ways, though. Although Ginsberg’s musical inclinations aren’t unknown – he recorded several albums of his poetry with music throughout his career, and collaborated with a host of musicians, most notably Patti Smith and The Clash – never before has Ginsberg’s desire to attain Dylan-size heights as a folk-rock singer-songwriter been made as clear as they are on “The Last Word on First Blues,” a newly released three-CD set (published by Omnivore Recordings), which includes a reissue of the little-known 1983 double album “First Blues,” plus a third disc, called “More Rags, Ballads, and Blues 1971-1984,” containing mostly previously unreleased odds and ends.

The tracks here are taken primarily from three recording sessions. The first was a hastily assembled one at the Record Plant in New York City in 1971 that included Dylan on a variety of instruments and backing vocals, as well as Dylan sideman Happy Traum on banjo, poets Anne Waldman and Peter Orlovsky on backing vocals, and composer-arranger and multi-instrumentalist David Amram, the unofficial First Musician of the Beat poets. (According to the liner notes, the shy or reluctant Ginsberg, already friends with Dylan at this point, still only indirectly asked Dylan through Amram if he would be willing to record with him.)

The second New York City session, produced by John Hammond, who first signed Dylan to Columbia Records in 1961, followed Ginsberg’s stint touring with the Dylan’s Rolling Thunder Revue; it featured Rolling Thunder multi-instrumentalist David Mansfield, whom Ginsberg had befriended on the tour, and downtown cellist Arthur Russell (no Dylan this time). The final professional recording session took place in 1981, again including Amram, Russell and Orlovsky, among others.

The third CD includes outtakes from these sessions, plus a few live tracks recorded at Folk City in Greenwich Village in 1984, and “Do the Meditation,” recorded at Dylan’s Rundown Studios in Santa Monica, Calif., in 1982, with Dylan on bass guitar, Mansfield on mandolin and Arthur Rosato, from Dylan’s “Shot of Love” tour band, on drums.

The overall effect here is similar to what went down in the basement near Woodstock in 1967, meaning this isn’t a pop album so much as a document of informal gatherings of musicians playing along with Ginsberg’s poetry and basic melodies and chord changes in a variety of roots-music styles – what we now call “Americana” – drawing from country, folk, blues, bluegrass, novelty and yes, even a few blistering rock ’n’ roll numbers.

Ginsberg, as it turns out, had a pretty great voice – a deep, booming baritone, almost always in tune, an expressive instrument undoubtedly honed by years of giving poetry readings as well as listening to all the greats, especially Ray Charles, to whom Ginsberg often paid tribute, and, of course, Bob Dylan (for better or worse). Ginsberg’s musical instincts were sound; he knew how to play harmonium and he wisely surrounded himself with professional musicians whenever he could.

A few moments leap out at a listener, such as when Ginsberg refers to “Mr. Ford and CIA Bush” in “Stay Away from the White House,” recorded in 1976, a full 13 years before Bush would indeed cap his political career by occupying the highest office in the land. Ginsberg’s 14-minute epic “September on Jessore Road,” originally a poem, is a brutal report from the ground of the 1971 crisis in Bangladesh, which for all its accumulative impact, had this listener yearning for George Harrison’s much more economical, funky and no less emotionally effective pop-rock song “Bangladesh” from that same year. And while presumably autobiographical, Ginsberg’s “NY Blues” is downright Dylanesque: “East side full of bedbugs, junkies in the hall; speed freaks took my statues and made my love a fool.” Shades of “Just Like Tom Thumb’s Blues.”

Ginsberg invokes his Jewish background mostly in the service of satire: In “NY Youth Call Annuncation,” he sings, “Come all ye Jewish boyfriends that live here in New York, for years we have been reading your delicatessen talk,” which I read as a wry rejoinder to his literary critics. In “Stay Away from the White House,” he seems to adopt the point of view of Richard Nixon when he sings, “Stay away from all those Jewboys with their Zionist delights / Stay away from all them Christians calling all them Jewboys kikes.”

In the liner notes, reissue producer Pat Thomas tells us that on his deathbed, Ginsberg’s “key regret” was that he never got to make a much-discussed appearance on “MTV Unplugged” (as Dylan did). So to the very end, Ginsberg aspired to rock stardom. My regret, however, is that Ginsberg left us in 1997; if only he had stayed around for eight years of George W. Bush in the White House and then lived long enough to witness the very real threat of a Donald Trump presidency. These times, as much as those Ginsberg lived through in the 1960s and ’70s, call for a mad, visionary, truth-telling prophet.