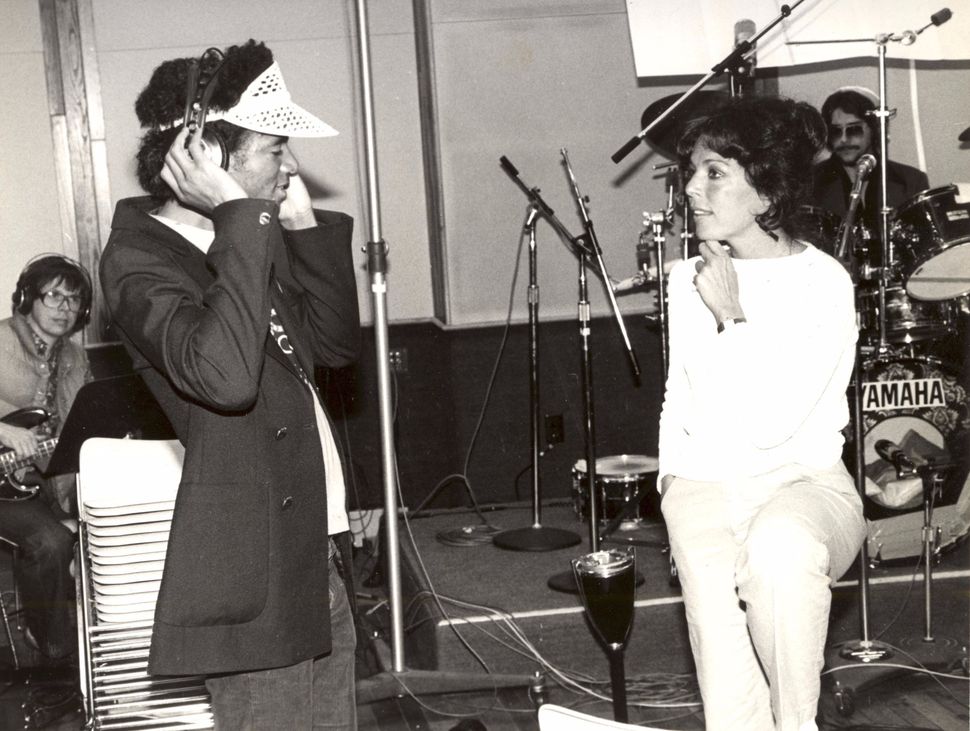 There’s a story in Carole Bayer Sager’s just-published memoir, “They’re Playing Our Song,” about the day she met Marvin Hamlisch. They were supposed to discuss writing the score for a TV pilot. The meeting was short; Hamlisch told her he had to leave for London to start scoring the new James Bond movie, “The Spy Who Loved Me.”

At which point, Sager said — wait for this now — “I just thought of a great title. ‘Nobody Does It Better.’”

Within minutes the pair created the basis for what would become a major hit for Carly Simon, the theme song for the film and, for Sager, the first of six Oscar nominations.

Like that song, much of Carole’s career seemed effortless: There was the Oscar win for “Arthur’s Theme” in 1981, nine Grammy nominations (one win for “That’s What Friends Are For”), and seven Golden Globe nods.

“I was having a great deal of success, which was a wonderful thing. But I wasn’t able to enjoy it,” Sager told the Forward. “I had so many fears and anxieties. I was in therapy from a young age. One doctor said to me because I had so many fears about illness, ‘you’re not afraid of dying. You’re afraid of living.’”

Sager grew up in an upper middle class Jewish family on New York’s Upper West Side. Her father, Eli, was raised in an orthodox home. But Sager’s mother Anita had no significant religious training. “But when I was about nine years old my mother told my father ‘Carole needs a place where we both go,’ so my father and she each gave a little and joined the conservative Park Avenue Synagogue,” Sager said.

Sager’s career began inauspiciously — with re-writing the lyrics to popular songs to entertain her summer camp bunkmates. “I was very fortunate to find my passion so young,” Sager says. “And even though my parents supported me, they urged me to have something to fall back on.”

She went to college, got a job teaching English at a vocational high school and wound up using song lyrics to help teach her students “Asking them to bring in their favorite songs and my bringing in songs enabled us to start talking about words and why they liked words,” she said.

Still, Sager continued to write. One day she came home from her teaching gig and found a $34,000 check in her mailbox, her share of royalties for the song “Groovy Kind of Love.” At the time, she earned $5,100 annually as a teacher. That kind of settled matters.

What followed was the kind of career most people just dream about. She collaborated with a who’s who of entertainers, and recently came out of retirement to co-write “Stronger Together” with Bruce Roberts and Kenny “Babyface” Edmonds as a campaign song for Hillary Clinton’s presidential campaign.

Sager’s relationship to her faith has largely been hit or miss. She celebrates the holidays, she says. “Also, in respect to my dad who I adored and who left the world too early — I was just 21 when he passed away — I always go to Yizkor. But I didn’t really find solace until I started studying kabbalah.”

Does her Jewishness play a role in her songs? “I don’t know,” she says. “Bette Midler used to make fun of how many songs I wrote with home in them. I think home is a place inside you where you connect with something higher. In that sense, I think, I’ve always had a connection with God.”

Curt Schleier is a frequent contributor to the Forward