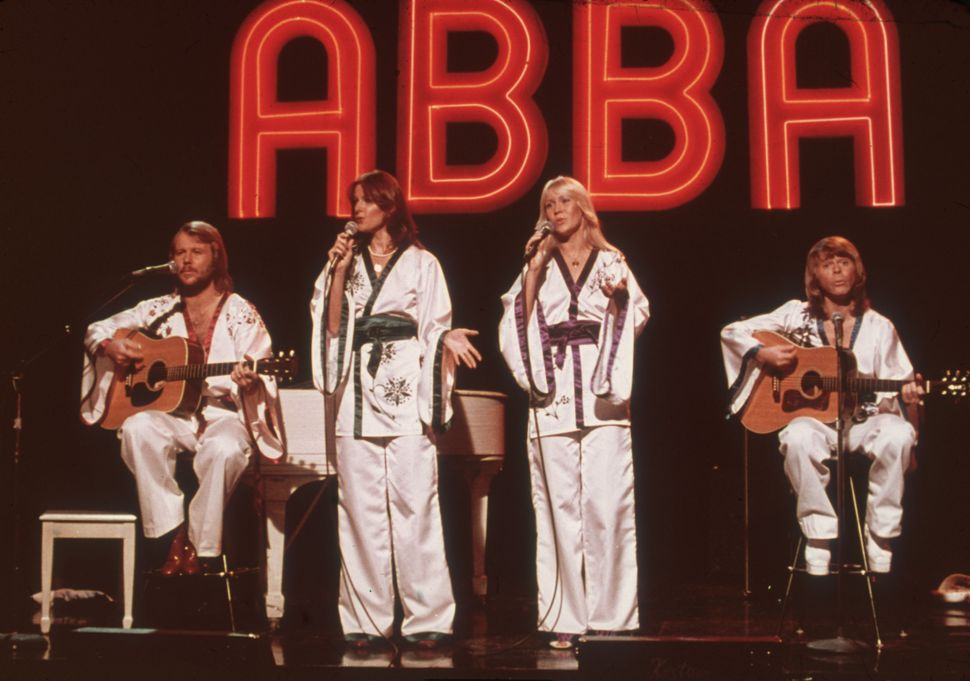 Fans of the greatest pop group of all time with a Hebrew name received a special treat after decades of waiting Thursday. In a livestream the band not only debuted a new song, but announced they will reunite for the first time in 40 years with a new album, “Voyage.” But that’s not all, beginning next summer ABBA will appear in concerts utilizing CGI models of the quartet in their prime, made possible by state-of-the-art tech built into a custom-made London arena.

Although the group ceased touring and recording as a unit in 1982, its monumental catalog of international hit singles and the global success of its jukebox musical, “Mamma Mia!,” have kept the group’s legacy alive in the ensuing years.

While it’s commonly assumed that the group’s title is an acronym of the Swedish quartet’s given names — Agnetha Faltskog, Bjorn Ulvaeus, Benny Andersson, and Anni-Frid Lyngstad — a careful examination of the group’s hits reveals an underlying nod to Jewish history and tradition, only hinted at by the name, ABBA, which means father in Hebrew.

“Dancing Queen,” the group’s only #1 hit in the U.S., is a nod to Shulamit, perhaps better known as Salome, daughter of Herod and queen of Chalcis and Armenia Minor by marriage, who performed the seductive Dance of the Seven Veils. What else could be meant by the line, “See that girl, watch that scene, digging the Dancing Queen”?

“S.O.S.,” another of ABBA’s greatest hits, is one of the rare pop tunes in the Jewish key of D-minor. Titled after an organization that runs programs connecting American and European Jewish youth, the song’s lyrics touch on the loss of a direct connection between the Jewish people and their deity at the conclusion of the Prophetic Era: “You seem so far away though you are standing near / You made me feel alive, but something died I fear / I really tried to make it out / I wish I understood / What happened to our love, it used to be so good.” One can almost imagine hearing these words sung by Nobel Prize-winner Bob Dylan. Or that other Jewish rock poet, Leonard Cohen.

The hit song “Fernando” is widely believed to be about a Mexican freedom fighter. What’s little know about the title character, however, is that he was a crypto-Jew who fled Spain for Mexico to escape the Inquisition.

“Honey, Honey,” the B-side of the group’s monster hit, “Waterloo,” is the group’s Rosh Hashanah song.

“Mamma Mia!,” the musical created by ABBA and based upon its songs, is the story of a girl named Sophie of uncertain parentage who has entered into an engagement, with a wedding to be performed by a priest. At the last minute, the wedding is called off when two men suspected of being her father show up at the wedding, both bearing — like Sophie — suspiciously Jewish names and occupations: Sam, an American architect, and Harry, a British banker.

The group’s song “Money, Money, Money” is basically a rewrite of the “Fiddler on the Roof” favorite, “If I Were a Rich Man.” With lyrics including, “I wouldn’t have to work at all, I’d fool around and have a ball…,” they took the words right out of Tevye’s mouth.

And so, the reunion of ABBA — albeit computer-generated — is being hailed globally and especially among fans of contemporary Jewish music. One just hopes that, at the collective age of 276, this project doesn’t turn into the group’s Waterloo, a thinly disguised retelling of the story of Joshua’s battle against Jericho.