How a Troubadour Daniel Toledano Is Reconnecting With His Sephardic Heritage 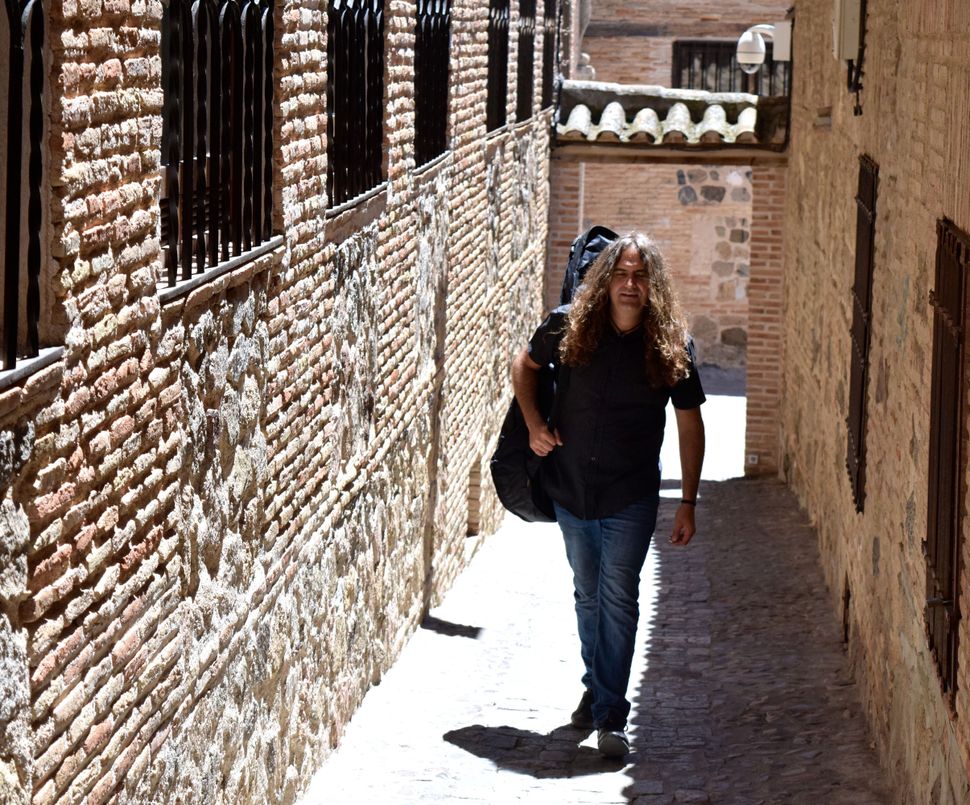 With his long, curly hair, his amber medallion and a guitar strapped onto his shoulder, Dani Toledano looks like a troubadour just about to recite an elegy. In fact, he works for Ragonis Tours, an Israeli company that helps groups of visitors discover the Jewish past of Toledo, Spain.

In a quiet square of the city’s Jewish quarter, near an ancient synagogue turned into a museum, a garrulous guide was narrating the life of Yehuda HaLevi, a celebrated Jewish poet of the early 12th century. On a nearby bench, Toledano tried out a few arpeggios. As the group moved toward him, he grabbed his guitar and started humming, in Ladino, the lyrics of “La Rosa Enflorece,” a medieval Sephardic ballad.

Toledano has been working for the company for the past two years, accompanying his tours with classics of the Ladino musical repertoire. He is convinced that his ancestors were Jews from Toledo who converted to Catholicism under duress in the late-17th century. Through Ladino music and Jewish-themed tours, he has embarked on a quest to embrace a past that he believes has been concealed for centuries.

Pulling in hundreds of thousands of visitors each year, Jewish tourism in Toledo is a thriving business. In 1995, the walled city joined a nationwide network of 24 Spanish municipalities that aim to preserve and promote their historical Jewish quarters. The mythical image of a tolerant and multicultural medieval Spain attracts thousands of travelers each year. On a recent visit to Cordoba, crowds of Japanese tourists were seen queuing up to take a selfie with Maimonides’s bronze replica. For a few minutes, the square reminded one more of an attraction at an amusement park than a historical Jewish quarter.

For Toledano, however, the Sephardic culture is anything but a short-lived craze. Instead, it strikes the deepest chords of his identity. A 42-year old rock band singer, Toledano was born in Santa Ana de Pusa, a town of 400, about an hour’s drive from Toledo. At first glance, Santa Ana looks like any other Castilian village, with its central plaza and imposing church, its alleys of red and yellow brick houses, its seniors chatting tirelessly on the sunlit patios. But for centuries, locals have buried a secret: They are the descendants of conversos, Jews who converted to Catholicism during the Spanish Inquisition.

Santa Ana was founded in 1526, three decades after the expulsion of the Jews from Spain. Its establishment was issued through a carta puebla, a royal document that granted privileges to a population settling in a sparsely inhabited region of the kingdom. At the end of the Reconquista — the Catholic campaign to recapture lands once conquered by the Muslims — the Spanish monarchs decided to populate areas of economic and strategic importance. In Santa Ana, the original settlers were converted Jews from the city of Magan, north of Toledo. When they left, these New Christians adopted the name of their hometown as their surnames. Up to this day, Magan is by far the most common last name in Santa Ana.

The Toledanos arrived two centuries later, according to the village’s archives. Though he wasn’t able to trace the details of his own family history, Dani Toledano claims that his ancestors on his mother’s side were Toledan Jews who had fled to Zaragoza in Aragon after the Expulsion Decree of 1492, but were arrested by the Inquisition forces, forced to convert before they moved to Santa Ana.

There, like in other towns of Spain and Portugal, many conversos kept observing their faith under cover for centuries. While officially Christians, they would light candles on Friday nights, have two separate sets of plates at home and recite Jewish blessings in private. The rituals were passed on to the new generations and preserved through institutionalized endogamy. Marriages would be arranged between locals so that the customs could be kept and the lineage perpetuated.

But over time, the traditions evolved into a distorted version of Judaism imbued with mystery and concealment, while the original meaning faded away. In Santa Ana, this atmosphere of secrecy is prevalent to this day, even if the Inquisition was officially abolished in 1834. The suspicion and reluctance to open up to strangers have become defining features of the villagers’ identity.

Within Santa Ana, the relationship to Judaism has sparked dissent for decades. While certain families refuse to acknowledge their Jewish ancestry, the Toledanos have always been proud of their alleged identity. Dani Toledano’s parents and grandparents told him at a very young age that he was Jewish though he should not mention it outside the household. “When I was 8 years old, my father and I watched the Eurovision Song Contest on TV,” he said. “At some point, the name of the singer representing Israel appeared on the screen: Avi Toledano. My father turned to me, smiling, and said, ‘He’s one of us.’”

Toledano gladly recounted episodes of his childhood that aroused his own interest in Judaism. “My mother was the village’s baker,” he said. “During the week, she would show people how to prepare a braided bread, but we would only sell it over the weekend.” His father told him about a circumciser who performed in Santa Ana until the late 1950s. “He would choose boys when they were 4 or 5 years old, according to their family names,” he said. “The Magans, the Toledanos, the Gomez, the Sanguinos. Everyone knew that these were the Jewish names.” And his uncle taught him the rules of animal slaughtering: “First, you remove the feathers from the neck. Then, you make one or two cuts so that the animal entirely bleeds out.”

Each year, the village organizes events and festivals unrelated to any Catholic tradition. One of them is what Toledano referred to as the “festivity of the dog” in late February, a celebration that strongly echoes the Jewish holiday of Purim. “We cover ourselves with fur and paint our faces in black,” he said. “Then we fill up bags with wine, and everyone gets drunk.”

Until fairly recently, Toledano did not know the origins of rituals his family has reproduced from time immemorial. They were all part of an unquestioned folklore. The trigger came 10 years ago, when he met a Ladino singer from Turkey who was on a visit to Spain. By then, Toledano had already included a few Ladino songs in his gigs. He would sing a rock version of them with his band. When the Turkish artist gave a recital, Toledano immediately recognized some of her melodies. “After her performance, she came to me and told me, ‘I’m a Sephardic Jew.’ It made me very emotional, so I answered, ‘Me, too.’

“After that, everything ensued. It is as if destiny had wanted me to get closer to the Jewish people.”

Toledano decided to embrace a career as a Sephardic musician. He cited Yasmin Levy, the renowned Israeli singer of Ladino music, as his main source of inspiration. “I admire her art and her songs,” he said. “She made my choice definitive.”

Toledano also tried to go through an official conversion to Judaism in Spain, but he couldn’t complete the costly and cumbersome process. His wildest dream is to travel to Israel and perform in front of his “Jewish fellows.” He’s even been able to catch a few words of Hebrew from his biweekly encounters with Israeli tourists.

As of now, Toledano sees himself on a personal journey to reconnect with a long-lost heritage. He’s spent a lot of time digging into the history of Santa Ana and his own family genealogy, perusing the village’s records and sacramental books. “I have so many things to clear out,” he said. “There’s a full life that I have yet to discover.”

Daniel Hoffman is a French freelance reporter based in New York. His work has appeared in French and English in Haaretz, The Times of Israel, La Vie and Le Parisien Magazine

How a Troubadour Daniel Toledano Is Reconnecting With His Sephardic Heritage