How 9/11 Changed Pink Floyd And Roger Waters For Me 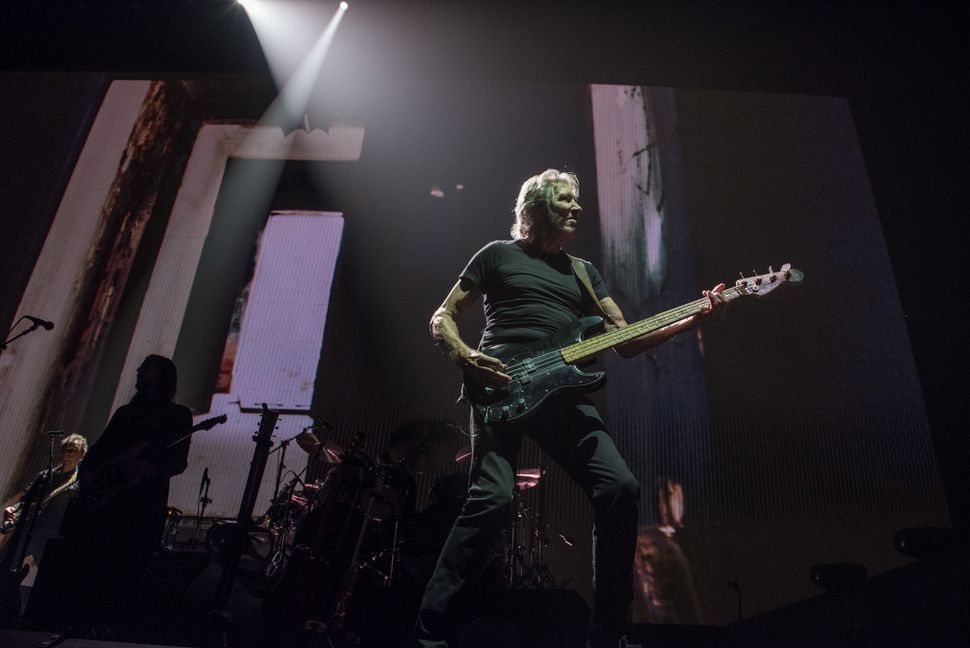 I went to see Roger Waters, late of Pink Floyd, play a Brooklyn arena last night. It was September 11, a fact that seemed irrelevant when I bought the tickets.

Once you get over the embarrassment of watching a 70-year-old man get worked up over lyrics he wrote when he was thirty (what if they made Philip Roth drive down from the Berkshires to give public readings of “Portnoy’s Complaint”?), it’s great to hear the old tunes played exactly the way you remember them. There was no twiddling about by Waters’ band, just chord-for-chord renditions of the album versions of “Comfortably Numb” and “Money” and “Wish You Were Here.”

The nature of a nostalgia trip like this is that it takes you right back to the moment when the music meant the most to you. I spent the first set time-shifting to the summer I turned 16, when I kept my Pink Floyd CD’s zipped up in a big plastic carrying case and played them over and over on my portable Panasonic Discman. Like teenage twerps everywhere, I would make a big fuss about how the only respectable way to listen to “Dark Side” was straight through, start-to-finish, and I talked annoyingly about queuing the album up to “The Wizard of Oz,” though I don’t think I ever actually did it.

Partway through “Welcome to the Machine,” I think, wallowing in the remembered feeling of being 16 and accessing deep wells of meaning from that scene in the movie of “The Wall” when Sir Bob Geldof shaves his eyebrows in the mirror, I did a bit of arithmetic and figured out that the moment of peak Pink Floyd obsession I was reliving happened 16 years ago, in the summer of 2001.

It was a jarring moment, because I had spent the day remembering how that summer ended: In the high school cafeteria, watching the woman who sold breakfast staring at the little TV she had behind the counter. We stayed that night with my aunt and uncle north of the city, and drove home the next morning towards a pillar of smoke.

Waters’ tour, called “Us + Them” after the “Dark Side” track, is unabashedly political: Anti-Trump, anti-war, anti-drone war, anti-torture, anti-all kinds of bad stuff. He’s never been one for nuance, and now he’s as subtle as a sharp poke in the eye. Waters wants us to know that he thinks Trump is a pig, so he projects cartoons with Trump’s head on a pig body, puts Trump’s face on the side of a pig blimp, and then just throws up the text at the end of the song: “Trump is a pig.” 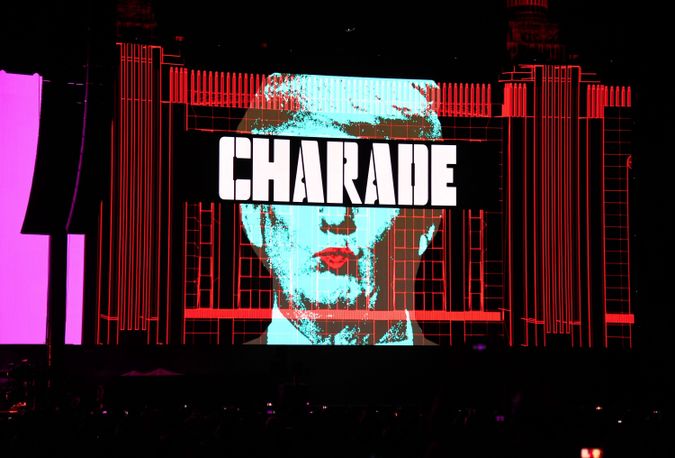 A visual from the ‘Us + Them’ show. About as subtle as a poke in the eye. Image by Getty Images

Pink Floyd phases were de rigueur for dorky guys of my generation. Mostly it was because we’d raided our dad’s record collections, and “Wish You Were Here” looked cooler than Donovan or “Theodore Bikel Sings Jewish Folk Songs.” But there was something else, too, that drew us to Pink Floyd and the rest of the music of our parents’ generation: A half-formed idea that, shared among the children of Upper West Side liberals coming of age in the Clinton era, that we wished we’d been born before history ended.

Our parents, we’d thought, had all the luck. Anti-Vietnam protests. Abbie Hoffman. Chicago ’68. We’d inherited a flat world with some fixable trouble on the margins. Obsessing over the pop culture felt like a way of signaling that you wished you had had a chance to help out when it counted, and that you were the sort of comfortable Upper West Sider who identified spiritually with bygone times of great struggle.

That the stoppage of history was trick of perspective, a Manhattan delusion, didn’t make the quick acceleration in the months and years after 9/11 any less jarring. I can’t say I stopped listening to Pink Floyd in the fall of 2001. But I do remember that I started having trouble remembering why I cared about Waters’ postwar obsessions. It didn’t make much sense to rock out to a song about how British schools were really awful places in the ‘50s.

I wonder now, watching Waters working so hard to make his old “Dark Side” and “Animals” songs work as anti-Trump anthems, whether he felt some of that, too. Remaking himself as a radical Bono seems a way for Waters to grab hold before history spins away from him. Even if he can’t escape the lyrics he wrote four decades ago, he can rework the metaphors to bring them out of the English postwar nightmare and into the global post-9/11 nightmare.

Outside the venue after the show, you could see the Tribute in Light away across the river. I’ve never understood why we decided to commemorate 9/11 by confusing the shit out of thousands of birds.

How 9/11 Changed Pink Floyd And Roger Waters For Me