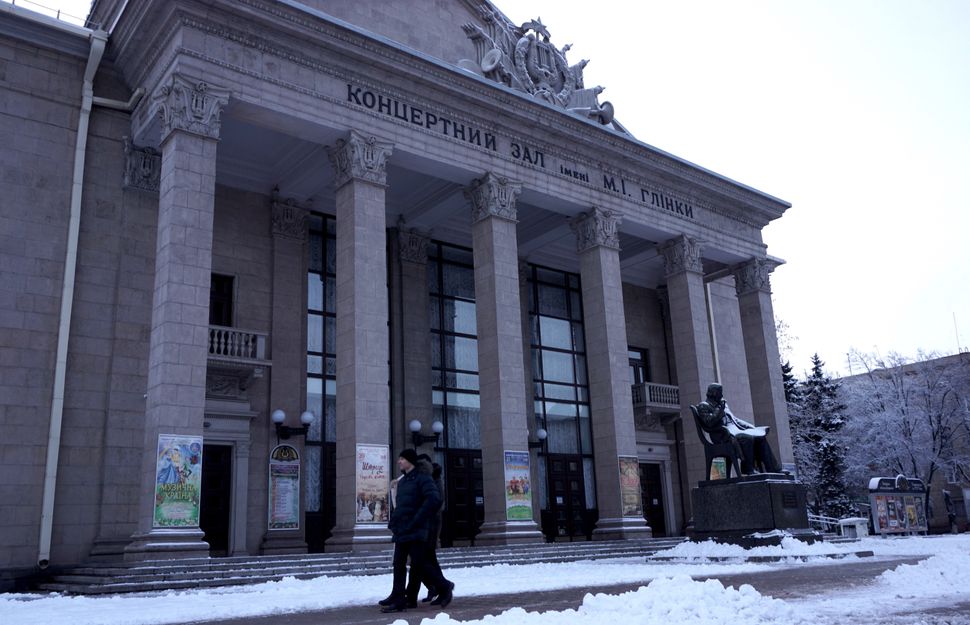 Vladimir Vysotsky tribute in Ukraine Image by Aisha Down

At a concert hall in southeastern Ukraine, Svetlana Balabukha, 70, says she can remember when she first heard Vladimir Vysotsky. She was 18, a schoolgirl in Donetsk, a town in now-occupied eastern Ukraine.

“First of all — what style, what a way of performing!” she says, then smiles and leans a bit closer. “And second…what a man!”

Balabukha’s friend, Olga Mirzoyan chimes in, quoting a love poem Vysotsky wrote to his wife: “I have never seen another hand/That could touch me like that./Here — like the yearning of sailors — My own soul now is yearning.”

“He was handsome,” laughs Balabukha. “He was the singer of our youth.”

On January 25th of this year Vladimir Vysotsky — the raspy-voiced, iconic singer-poet of the USSR — would have celebrated his 80th birthday. Frequently compared to Bob Dylan, Vysotsky was born in Moscow in 1938 to a Jewish father and a Russian mother.

Now, more than 37 years after Vysotsky’s death in 1980, a well-known Ukrainian singer and lyricist named Arsen Mirzoyan is doing a tribute tour. The first concert is taking place here in Zaporizhia, a steel town not far from the front lines of the ongoing war in eastern Ukraine.

People in the audience shout out Vysotsky lyrics. Many can remember when Vysotsky was alive and officially banned. Back then, says Balabukha, people played his music on reel-tape recorders — often just amateur recordings of his concerts.

“Vysotsky was banned because he gave a certain freedom to people,” says Alexander Mozgovoi, 50, who grew up hearing bootleg Vysotsky tapes.“People listened in secret their kitchens,” he says. With a bit of vodka, he adds, for when the music grew too emotional.

It’s hard for these concertgoers to explain just what Vysotsky meant to them. Some insist that his lyrics are impossible to translate. Others say they’re universal — lyrics for the whole world, as well as Russian-speakers.

For many, though, Vysotsky’s songs are about their own lives. Vysotsky achieved fame in his lifetime — Mozgovoi says he was the first man to own an S-class Mercedes in Moscow. But what rings through his music is hardship.

He spent his first years in a cramped communal flat in Moscow, before his parents divorced. After the war, he lived for a time in Soviet-occupied East Germany with his father — Semyon Volfovich Vysotsky, who was a colonel in the Red Army.

His lyrics speak with the voices of outlaws and thieves, of soldiers like his father and of the working people of Moscow. At a time when the USSR was celebrating Yuriy Gagarin’s flight and the achievements of the space program, Vysotsky’s voice was something else: gritty and darkly real.

Songs like “He Did not Return From the Battlefield,” conjured up the legacy of war, something Vysotsky understood from his father.

Mirzoyan, who performing Vysotsky’s songs, says the singer was far more than just a painter of reality. “Usually there are two meanings in his songs. Vysotsky is often called a prophet,” he says. “When time passes, you can find a third meaning.”

Mirzoyan, now 39, says he started learning Vysotsky songs when he was five and growing up in Zaporizhia. He would sing for workers at a nearby construction site and they would give him watermelon.

It’s hard to perform Vysotsky, he says. Legend has it that Vysotsky never tuned his Russian seven-string guitar — though Mirzoyan says it’s more likely that the guitar itself just wasn’t very good. Vysotsky’s sound was rough, and there was a lot more than sound there. “Vysotsky is a nerve. You cannot put him in any genre,” he says.

But times have changed since Vysotsky, says Mirzoyan. Performers like him don’t exist anymore. “Vysotsky was another story. He was prohibited everywhere. He never wrote songs to anyone’s orders,” he says.

Times have also changed in Zaporizhia as well. The icy street behind the concert hall still bears the name of Lenin, but says Mozgovoi, the way of thinking today is different. Freedom isn’t at issue as it was. “Now, young people don’t understand his songs in the same way,” he says.

Still, the name Vysotsky packs concert halls — at least this one — with a mix of pensioners and nervous young people. Some things, like love and hardship, like the ugly reality of war, are eternal.

Viktor Baranovsky, 61, has spent his life in a small village near Zaporizhia. He served in the army before working for decades in the abrasives industry. He says his favorite song is “The One Who Didn’t Shoot,” which is about a soldier facing a firing squad. As he tries to explain the song, he starts to cry.