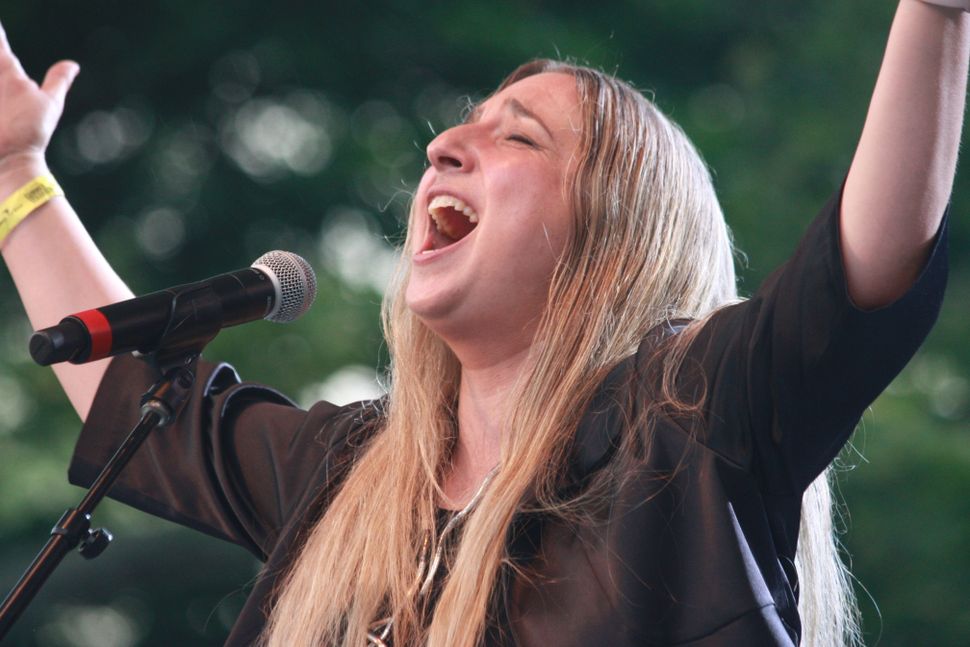 Central Park’s annual SummerStage Festival, typically the domain of Americana artists like Rhiannon Giddens, rap veterans including Public Enemy, indie rock legends such as the Feelies, latter-day folkies like the Indigo Girls, jazz artists including McCoy Tyner and Roy Haynes, and Afropop stars such as King Sunny Adé, took on a decidedly Ashkenazic tinge last night – as it has for one night each summer in recent years – with “Yiddish Under the Stars,” featuring stars in the sky and stars of Yiddish and klezmer music onstage.

A production of the National Yiddish Theatre Folksbiene, hosted by the riotously funny Emmy Award-nominated actress Jackie Hoffman – who plays the role of Yente in the Folksbiene’s upcoming Yiddish version of “Fiddler on the Roof” – the three-hour extravaganza featured over a half-dozen acts which, while all rooted solidly in Yiddish and klezmer tradition, approached it from a variety of angles such that it was almost a mini-version of an entire SummerStage season.

Yiddish-punk group Golem, led by the indomitable singer-accordionist Annette Ezekiel Kogan and featuring her wacky sidekick, vocalist Aaron Diskin – kicked off the affair with its sexy, in-your-face version of Yiddish music. This time around, the group added a hip-hop kick in the tukhis to its already funky approach, juiced by secret weapons Tim Monaghan on drums and Taylor Bergren-Chrisman on bass and colored by the melody lines of violinist Jeremy Brown and trombonist Curtis Hasselbring. By starting off the show with Golem, the statement was clear: this was not going to be an evening of your grandfather’s klezmer.

And it wasn’t – although if your grandfather (and grandmother) were the least bit open-minded (as mine were), they would have nevertheless enjoyed the proceedings greatly. Cantor Magda Fishman, for example, combined her liturgical virtuosity with a very contemporary delivery and stage presence, making for a kind of cross between Moyshe Oysher and Adele. The Israeli native even tackled a Yiddish version of the Louis Armstrong classic, “What a Wonderful World” – replete with her own trumpet solo!

Living legend and recipient of a National Heritage Fellowship from the National Endowment for the Arts, Andy Statman – one of the original klezmer revivalists of the 1970s – demonstrated how on the one hand you can daven with a clarinet and then, without stretching too far, you can elide into John Coltrane avant-garde jazz territory, and then without missing a step other than swapping a clarinet for a mandolin take it on a Tennessee stroll via a bluegrass waltz. It helps when you have sympathetic musicians to work with, and drummer Larry Eagle and bassist Jim Whitney were with Statman every step of the way – especially when Andy figuratively turned his acoustic mandolin into an electric guitar on a surf-rock number that sounded like the Ventures met Bill Monroe on their way to a bris. 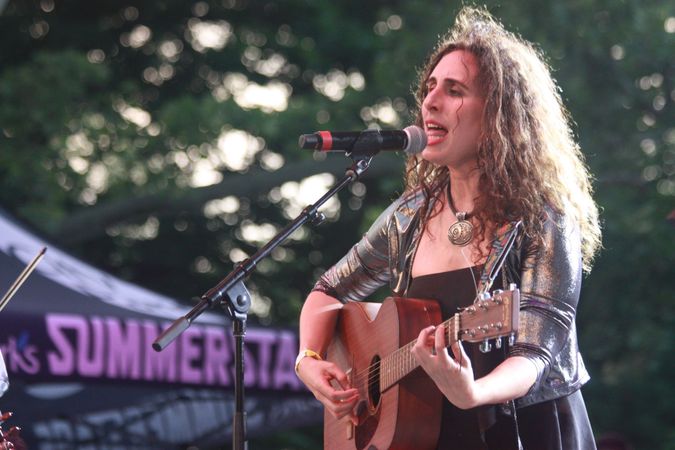 Basya Schechter performed poems by the great 20th century Jewish thinker Abraham Joshua Heschel set to new music with her Jewish-world fusion outfit, Pharaoh’s Daughter. The group’s unique blend of instrumentation – oud, recorder, violin, guitar, and percussion – combined with Schechter’s cantorial-trained voice and ensemble harmonies drew on influences from throughout the Jewish diaspora, from Eastern Europe to the Middle East and beyond.

After a brief tease of a promising bit of the upcoming Yiddish “Fiddler on the Roof” – I mean, “Fidler Afn Dokh,” as emcee Jackie Hoffman insisted we call it – the big surprise of the evening was an unbilled appearance by National Security Adviser Saul Berenson, aka Mandy Patinkin, himself one of the commanding stars of the contemporary Yiddish scene. Patinkin wasn’t there to sing (unfortunately), but to pay tribute to Yiddish – the language, the music, the culture – and to those who rescued it, those who brought it back to life, and those who perpetuate it. Patinkin honored the groundbreaking work of musicologists Chana and Yosl Mlotek in this vein and presented the Mlotek Memorial Prize for Yiddish Continuity to Daniel Kahn, perhaps best known for his viral YouTube hit, a Yiddish language version of Leonard Cohen’s “Hallelujah.” As Patinkin pointed out, Kahn is also, however, an actor (he’s in the cast of “Fidler Afn Dokh”), a teacher, a poet, a translator, and an all-around rabble-rouser of Yiddish culture, on his own and with several musical ensembles, including Daniel Kahn & the Painted Bird, which performed several of his pointedly political updates of Yiddish labor and radical songs by the likes of Dovid Edelshtat, Mordke Gebirtig, and contemporary Yiddish songwriter Josh Waletzky, whose own work sits comfortably alongside that of his early-20th century forebears. (Daniel Kahn & the Painted Bird have an upcoming concert at the Marlene Myerson JCC Manhattan celebrating the release of its new CD, “The Butcher’s Share,” on Tuesday, June 26, at 7pm.)

The golden age of Yiddish song was represented in performance by Eleanor Reissa, the preeminent Yiddish vocalist of our time, in tandem with Frank London’s Klezmer Brass Allstars. Reissa embodies the living connection between the best of Second Avenue, traditional Yiddish folk and theater songs, and the spirit they share with songs ostensibly from outside the Yiddish tradition. In practice, this meant investing “Alts far gelt (It’s All About Money)” with some pointedly contemporary references and tackling the Yiddish swing chestnut “Bay Mir Bistu Sheyn” with fresh energy. Perhaps most surprising and delightful was “Dos land is dayner,” Reissa’s Yiddish rewrite of Woody Guthrie’s “This Land Is Your Land,” which, again, sung in Yiddish, sits quite comfortably alongside some of the more radical tunes in the Yiddish songbook, and in this arrangement by Frank London, delivered with a rollicking, New Orleans brass band arrangement.

There was a panoply of sounds, musical and otherwise, emanating from the SummerStage sounds that at once fit right in with the festival’s broad, open-minded program, but that were also proudly and defiantly Yiddish.

Seth Rogovoy is a contributing editor at the Forward and the author of “The Essential Klezmer: A Music Lover’s Guide to Jewish Roots and Soul Music” (Algonquin Books, 2000).