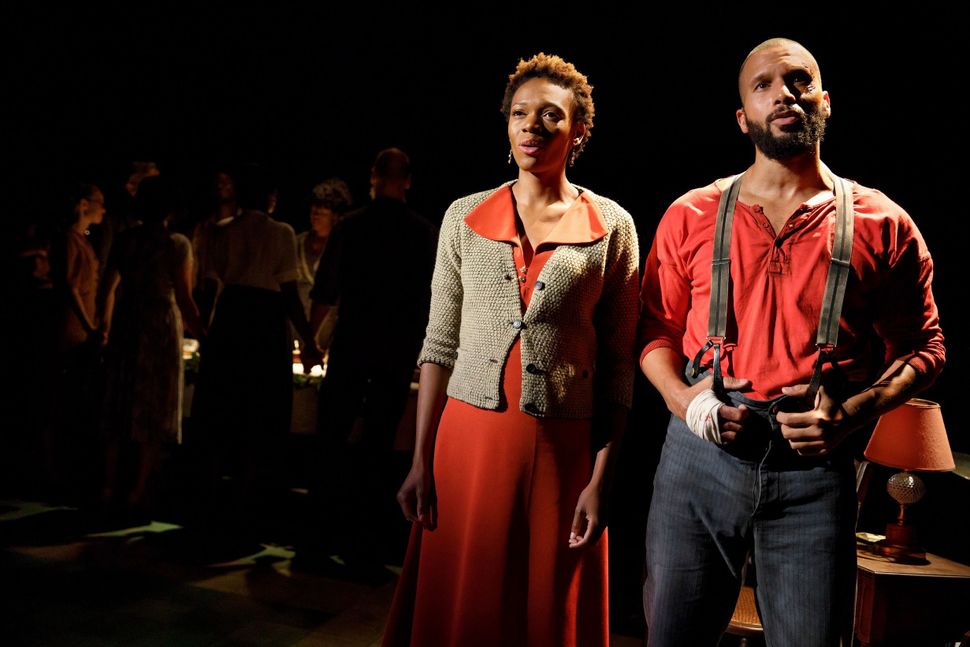 About a quarter way into Conor McPherson’s play with music, “Girl From the North Country” (running through Sunday, December 9, at the Public Theater in lower Manhattan), a bible salesman unaccountably mutters this apparent non sequitur:

Big storm’s coming, my boy. Here. Europe. Everywhere. You ever wonder what woulda happened if the Jews met the Vikings? Huh? The Vikings! You know what they would done to the Jews?

It’s winter 1934 in the depths of the Great Depression. The place is a rooming house in Duluth, Minnesota. The music upon which the play is built consists of 20 Bob Dylan songs, more than half of which, it’s fair to say, are lesser-known numbers, primarily from the 1970s and ‘80s, most probably unfamiliar to all but the most dedicated Dylan fans. The drama is in how the complicated, intertwined lives of the dozen-plus main characters in the house intersect at a liminal moment in time, when not a slow but a fast train comin’ down the line will shatter the inertia that has kept these folks together in bonds of love, blackmail and deceit.

The play is Dylanesque in theme and execution, propelled and informed by the Nobel Prize-winner’s songs, which are delivered in surprising but perfect arrangements and performed by a cast of gorgeously talented singer-actors (including Mare Winningham). The songs mostly illuminate the play’s emotional truths at the same time that the play’s action often redefines the truth of the songs. That’s quite a feat to pull off, with all credit due the playwright, who is also the director.

This is by no means a “jukebox musical”; it has more in common with some of Dylan’s more impressionistic forays into film (“Renaldo and Clara” and “Masked and Anonymous”) and the feel of some of his more elaborately sketched-out story songs (e.g., “Lily, Rosemary and the Jack of Hearts”). The play’s concerns are Dylan’s — race relations, economic inequality, criminality, messianism — and the characters are right out of his songs, which undoubtedly also accounts for the astonishing ease and logic with which the drama interweaves with the songs. It could have gone so wrong. You just can’t help but wonder, how did McPherson do this?

I don’t know what would have happened had the Jews met the Vikings. I guess it depends on where and when. But I also just can’t help but wonder if McPherson is having the bible salesman foreshadow the Holocaust at the same time he’s riffing on Bob Dylan himself. Is Duluth-born Robert Allen Zimmerman, who was raised in a small Minnesota mining town mostly populated by “Vikings” (also the name of the state’s very popular football team) or their literal or figurative descendants, what happens when the Jews meet the Vikings?