The Astronomical Force And Zen Cool Of Leonard Cohen 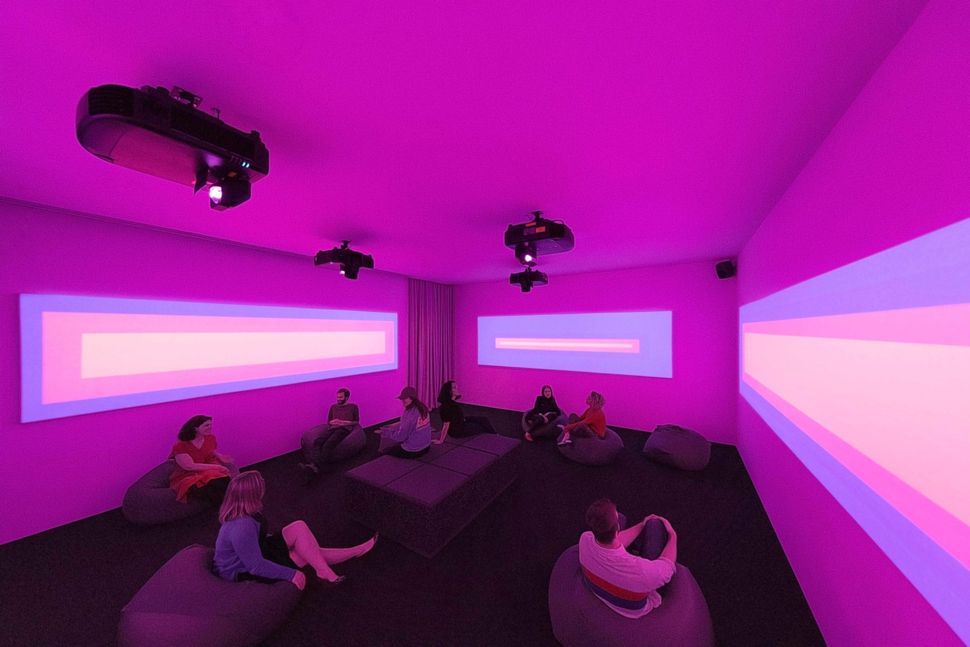 Listening to Leonard: Installation view of the exhibition “Leonard Cohen: A Crack in Everything,” organized by the Musée d’art contemporain de Montréal, and presented at the Jewish Museum, New York, Image by © Frederick Charles

The late phase of Leonard Cohen’s career began, like a lot of artistic triumphs, with the desperate need for a quick buck. In 2004, Cohen learned that his manager, Kelley Lynch, had been quietly stealing his money and that he was now, at the age of seventy, virtually penniless. Lynch was ordered to pay 9.5 million dollars (she never did) and later went to jail. Cohen went back to work. In the twelve years leading up to his death, there were new albums, poetry collections and concerts — more in 2009 alone than in the previous fifteen years — and with them a new generation of fans, many of whom would never have fallen in love with his work and made him filthy rich again had it not been for the woman who’d tried to ruin him.

Footage of Cohen’s concerts from the 2000s and 2010s are among the many highlights of “Leonard Cohen: A Crack in Everything,” a new exhibition at the Jewish Museum in Manhattan. Under development well before its subject’s death, the show is noticeably and refreshingly free of manuscripts, clothes, and the various other holy relics you might expect from a Cohen retrospective. The curators, John Zeppetelli and Victor Shiffman, seem more interested in celebrating his ongoing influence than preserving his memory. Video and installation artists have contributed interpretations of Cohen’s life and work, and the third floor of the museum echoes with covers of his songs by Feist, Sufjan Stevens, Lou Doillon, and, for mysterious reasons, Moby. 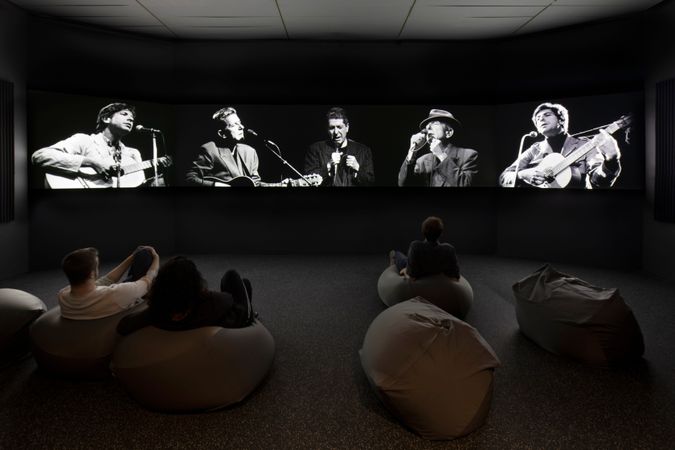 What “A Crack in Everything” does offer in the way of straight biography is neither particularly damning nor worshipful. We learn from the detailed wall texts about Cohen’s privileged childhood in 1940s Montreal and the acclaim he won in the 1950s as a poet (music wouldn’t fully eclipse his literary pursuits until he was close to forty). His life was full of setbacks and embarrassments in the way that most multitalented, ambitious people’s are: there was a dull spell at Columbia Law School and a mound of rich-kid angst, culminating in a disastrous trip to Cuba in 1961 (which, if nothing else, rid him of the idea that he was some kind of Marxist freedom fighter). He later admitted that his 1977 collaboration with Phil Spector did him no favors, and you’d need a heart of stone to watch his appearance on “Miami Vice” without chuckling.

But even in the most harebrained of these projects — even when he’s playing a guest villain named Francois Zolan and every syllable out of his mouth comes with a double helping of Eighties muzak — he can’t help but be cool. Cohen was blessed with such boundless reservoirs of coolness, in fact, that he spent decades figuring out what to do with them. Watching the concert footage from the exhibition, you find him constantly reworking his act, throwing out the superfluous bits and refining what was left. You’d be forgiven for thinking that he didn’t really settle into his stage persona — the growling, black-hatted poète maudit who’s somehow sexy, spiritual and funny all at once—until the final decade of his life.

The evolution of that persona, over the course of eighty-two years and thousands of performances, is the implicit subject of two biographical video pieces in “A Crack in Everything,” George Fok’s “Passing Through” and Kara Blake’s “The Offerings.” From the latter, we hear Cohen’s musings on poetry, folk, and the mark his Jewish upbringing left on his musicianship. It was, by his own reckoning, the “charged speech of the synagogue” that inspired him, at the age of nine, to write his first poem, an elegy for his dead father. In his teens he continued to write and perform poetry, often about his father, and some of what’s survived from this period is still affecting in its spare eloquence.

Reciting poems came easily. Singing them was harder. Cohen transitioned into musicianship uncomfortably, first working it into his poetry readings and later writing songs for others to perform — his first masterpiece, “Suzanne,” was a hit for Judy Collins the year before he recorded his own version. Singing the song at a 1966 benefit show in Greenwich Village gave him such intense stage fright that Collins had stand by his side and finish it with him. 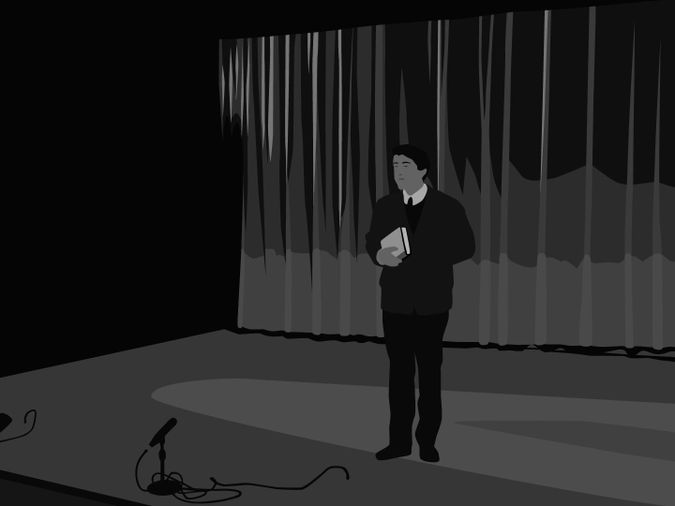 Digital Cohen: A still from a short film by Kota Ezawa. Image by Courtesy of Kota Ezawa

Even in his beloved 1970 Isle of Wight performance (large stretches of which feature in “Passing Through”), he projects something close to neediness. Performing before a crowd that had already booed Kris Kristofferson and Jimi Hendrix, his face quivers with nerves, curls up, down, side-to-side, as if he’s begging people to feel one one-millionth of what he feels. Later in life his performances become stiller and sexier. He learns to do much more with less: instead of approaching you hat in hand, he holds something back, waits for you to come to him. His act was a masterpiece of self-awareness, built around the limits of his vocal range and the limitlessness of his charisma.

With that self-awareness came humor. Where “Suzanne” is too sincere to spare a second for mirth, Cohen’s later work often opts for a lighter touch, handling its own theological intensity with care. When he sings, “I was born with the gift of a golden voice,” the words sound at once plausible, if by “golden” he means molten metal that scorches everything it touches, and nimbly ironic — the voice he was “born” with took thirty-three years to appear on a studio album. There’s a similar twinkle in the way he described his time in the Nineties as a Zen monk: “I hated everyone / but I acted generously / and no one found me out.”

A monk with no wisdom to impart; a con artist who lets you in on half the con; a TV evangelist who makes holiness sound both glitzy and nourishing — Cohen in his later years played all these parts with an ease that hid decades of trial and error. There’s a lovely moment in “Passing Through” when Cohen, performing “The Tower of Song” at Austin City Limits, asks his fans if they’d be interested in hearing the meaning of life. They go wild, naturally, and Cohen smiles, barely. His backup singers carry on, unphased—“doo-dum-dum-dum, da-doo-dum-dum …”—and the tension builds for a few more minutes. “Do you want to hear it?” Cohen asks, “Do you? Do you?” and just when the audience can wait no longer he launches into his own “doo-dum-dum-dum, da-doo-dum-dum,” and the laughs and cheers of festivalgoers in Austin merge with the laughs and cheers of museumgoers in Manhattan. 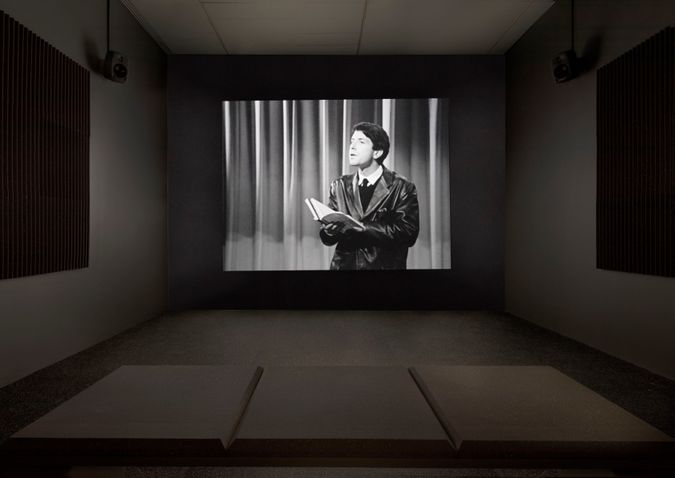 To appreciate how precious this kind of showmanship is, you have only to visit the museum’s third floor and listen to the contemporary takes on Cohen’s music. Like his sometimes-rival Bob Dylan, Cohen was, fundamentally, a soft-sell performer whose songs were doomed to be covered by an endless procession of hard-sell artists who couldn’t resist shining and sweetening his work. Even something as powerful as Jeff Buckley’s “Hallelujah” is almost a photographic negative of its source; everything mysterious or emotionally understated about Cohen’s original version has been pushed to the surface and rendered brightly unignorable. Buckley’s performance hasn’t been included in the exhibition, but many of songs that were strike a similarly earnest tone, with mixed results. Julia Holter’s passionately polished “Take This Waltz” starts well but leaves you numb — each repetition of the chorus is more imploring, and less persuasive, than the one before. Neither Holter’s cover nor any of the others in “A Crack in Everything” comes close to achieving what Cohen’s originals do: hypnotizing you into making the first move, drawing you into the singer’s orbit.

This idea of Cohen as an almost astronomical force, too vast to be comprehended all at once, underlies two of the finest pieces in “A Crack in Everything.” One, “I Heard There Was a Secret Chord,” designed by the design studio Daily tous les jours, allows participants to sing “Hallelujah” into a microphone, triggering a plangent murmur that ebbs and flows with the number of people across the planet currently listening to Leonard Cohen’s music. The other, “I’m Your Man (A Portrait of Leonard Cohen)” by Candice Breitz, consists of eighteen screens, each showing a devoted Cohen fan singing along, gracelessly, to his 1988 album “I’m Your Man.” None of them seem aware of the cacophony they’re creating — all they can hear is the original “I’m Your Man” humming through their headphones.

It’s easy to laugh at a pack of old farts failing to sing along with a great singer, as easy as laughing at the paunchy fanboys who like to dress up as Aquaman and Superman. But on further reflection “I’m Your Man” turns poignant: these eighteen strangers, banal in seemingly every way besides their involvement in this performance, have access to beautiful music that we, experiencing Breitz’s artwork, can only grasp indirectly. Graceless or not, they seem to be guarding something sacred — and in this sense, they’re more like Cohen than they seem. At his very best, Cohen gave the sense that he was holding something back, some secret chord which no biography or song or exhibition could play. Not for nothing was his Zen name “The Silent One.”

The Astronomical Force And Zen Cool Of Leonard Cohen