Doubling On The Shofar: A High Holiday Jazz Story 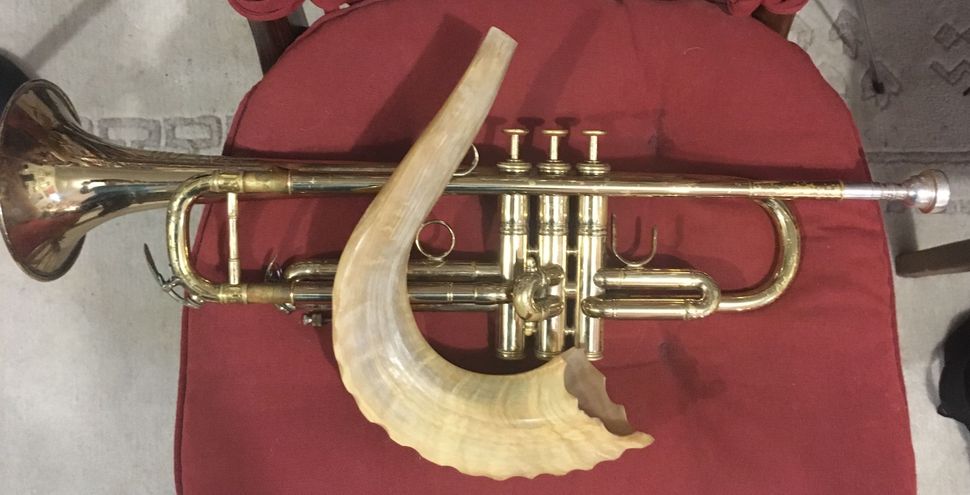 Trumpet and Shofar: Two tools of the jazz man’s trade. Image by Courtesy of Stephen Provizer

Since I was a boy, my musical heroes have been jazz musicians — Miles Davis, Dizzy Gillespie, Lester Young, John Coltrane. My own trumpet playing was good enough to get me the solo chair in the school band, but my taste far outstripped my talent and I would never stoop to play in a band that would have me as a member.

Because of that, all my playing took place in school auditoriums, gyms and my bedroom. Then, one particular High Holiday season, this all changed and my musical prowess was finally put to use, although in a way that this aspiring jazz musician would never have expected.

The old man who had always blown the shofar at the synagogue I attended had simply run out of breath. I’d been bar mitzvahed at this synagogue and it was known that I played the trumpet, so the rabbi and chazzan drafted me into service, via my mother.

Well, the gig was on New Year’s (Rosh Hashanah) and I was going to play a big room (capacity 2,500). So, while I was not precisely living out my fantasy of the jazz man who walks into the club and sits in with the house rhythm section, I could always remind myself of Harold Arlen, whose father was a cantor, who ended up as house piano player at Harlem’s Cotton Club and wrote tunes like “Blues in the Night” and “Stormy Weather.” True, I wasn’t going to be playing the trumpet, but most musicians have to learn to play more than one instrument, like trumpet and fluegelhorn. It just so happened I was learning to “double” on ram’s horn.

I began to learn the calls the chazzan makes to the shofar-blower during the service — tekiyah, shevorim, teruah — and what blasts I would have to make in response.

At the same time, I worked on getting the feel of my ancient instrument. The shofar is actually a hollow horn, with one end filed so it can be pressed flat against the mouth. It is blown not in the center of the mouth but in the corner and, as with the trumpet, sounds are produced by vibrating the lips. The shofar has been around for a while and served the needs of some other excellent musicians in the past — Joshua, for example, who made a particular hit during his engagement at Jericho.

When the day of the service arrived, I strode onto the bimah with my instrument in tow and surveyed the room. It wasn’t Birdland, but it was a start.

The service began and I had an immediate shock: from my new perspective on the bimah, I could see that the chazzan used a pitchpipe. This threw me for a moment. Maybe he also sang the blues in the shower (Actually, knowing that the cantor’s pitches didn’t simply descend from on high made me feel that perhaps we could work together).

I was called upon almost immediately to play and so I arose from the throne-like seat and made my way to the solo spotlight. Wetting my lips, I lifted the shofar to my mouth and prepared to blow the first of 100 blasts that I had to play that day.

“Tekiyah,” the cantor repeated patiently. I wet my lips again, as the unsettled buzz of the congregation grew louder. “De-a-ah!” A beautiful sound emerged from the horn.

“Teruah,” he called. “Da-a, Da-a, Da-a!” Now the crowd was starting to fall in line. He continued to feed me calls and I responded more and more confidently. The congregation, used to the more asthmatic (if more sanctified) sounds of an aging sexton, listened raptly to the full-throated roars this instrument can produce.

Each time that I strode out that morning to blow, I had to re-convince a nervous congregation but, as time passed, they were more and more on my side. Eventually, the entire congregation seemed to inhale simultaneously with me and would not release its collective breath until I completed the series of sounds I was making.

The Rosh Hashanah service is closed with a series of blasts that culminate in a tekiyah-gedolah, or “big tekiyah.” This is supposed to be as long a blast as you can manage, with a rising pitch tagged on to the end for good measure. If this note cracks or splinters, all the good work of the day becomes meaningless; as if you had circumnavigated the globe, only for cannibals to catch up with you at your final port of call.

Finally, all the hymns had been sung. The rabbi duly noted who’d paid for the beautiful flowers and who’d bought the knishes for the Oneg Shabbat. The stage was mine alone. I finished the preliminary calls in the last series and the chazzan at last called out: “Tekiyah gedolah.”

I reached down deeply into my adolescent diaphragm and filled that horn with all my breath. “De-aaaah…” A long note emerged, a call to grace and forgiveness. Then, the final push, from deep within: “Ahhhh — Ahhhh!” I lowered the horn slowly, as we all listened to the sound gradually fade away in that reverberant room. Then, at precisely the same moment, everyone released a breath in a massive sigh of satisfaction. I had tapped into an energy that, in some way, had purified everyone in that gathering and I distinctly felt the embrace of every member of the congregation enfolding me. I shook hands with the rabbi and chazzan and smiled.

When we spoke later, they offered to pay me for my work and I said that, if possible, I would like to keep the shofar.

Today it sits peacefully in my music room. It is bone-hard, gently curved and fluted at one edge; hollow, but heavy with the weight of centuries. It resonates still with the power of sound that can unlock the silence within us.

Stephen Provizer is a writer, musician and actor, living in Gloucester, MA.

Doubling On The Shofar: A High Holiday Jazz Story