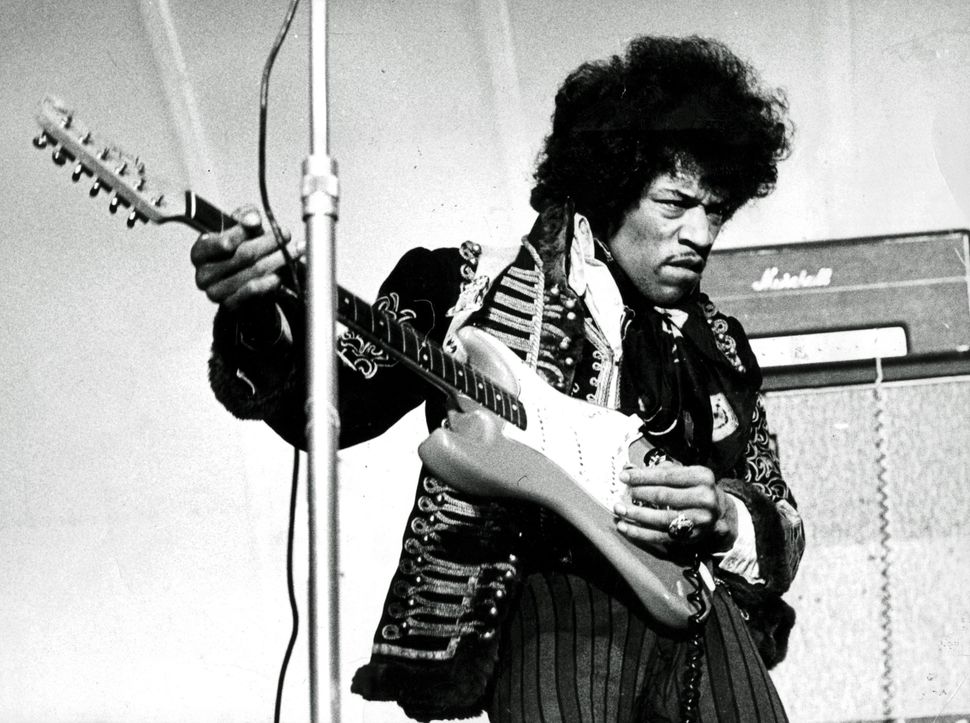 I was a fifteen-year-old, not-very-hip teenager during the Woodstock Music & Art Fair, which I did not attend. I did watch the movie, though, soon afterwards, and when the fiftieth anniversary rolled around this August, I watched it again. This time, as the High Holy Days approached, I was particularly struck by the festival’s final set, the one in which Jimi Hendrix played his stunning, discordant version of “The Star-Spangled Banner.”

Hendrix, a black man, an ex-serviceman, and an acknowledged master of his instrument, used string-bending, feedback, and distorted power chords to create what many saw as a profound commentary on late 1960s America, with the war in Vietnam and racial strife as its backdrop. In his solo, some heard the sounds of helicopter blades and bombs bursting, others the screams of dying individuals; still others heard a cry of black rage. His use of the anthem, said one commentator, the historian Michael Doyle, was like “the rupture of something sacred.” It could be seen as a fascinating, perverse use of the ritual of anthem-singing, which aims to reiterate our patriotism. Instead it engaged in an act of angry, self-critical love. He likened it to a diatribe or a sermon, which asks its listeners a series of searing questions. It had an immediate impact: a witness said that it caused people to clutch their heads and literally tear out their hair, so ecstatic, so moved were they. It remains the most significant and enduring set played at Woodstock.

Hendrix, who would have turned 77 this week, did not proclaim any sort of political ideology: A few nights later on “The Dick Cavett Show,” he even bristled when Cavett called his altered anthem “unorthodox”: “I don’t think it’s unorthodox,” Hendrix said. “I think it’s beautiful.” And when Cavett pressed him to say why he had played it, Hendrix merely stated, “I played it because I’m an American.”

“I thought it was beautiful.”

“I played it because I’m an American.“

The more I read and thought about the Hendrix anthem and its sermon-like quality, the more I connected it with the High Holy Days, specifically, the verses from Isaiah 58 that we read as a haftarah on Yom Kippur. The reading from Isaiah also begins with an electrifying, powerful, and discordant blast, as loud as a shofar. This is the voice of an angry God, who tells the prophet Isaiah, his mouthpiece, to trumpet the people’s misdeeds. And He, too, begins with a series of searing questions. First, he mockingly echoes the complaints of the people: “Why don’t you, God, pay attention to us, to our fast? When we starved our bodies, you paid no heed!”

“Yeah?” retorts God firing off his own question: “Do you think I want this fast, when you bow your head like a bulrush and lie in sackcloth and ashes?” And then he enumerates all the ways we are failing: We think only of our own desires. We treat our workers badly. We speak maliciously. We do not house and feed the poor. In short, we do not act charitably or nobly. You think you are a nation that is doing what’s right, says God, but you are not!

Just as Hendrix uses America’s anthem to deliver his critique, so does God/Isaiah use our ritual of fasting, and also of telling the tale, to offer a scorching self-assessment. Here we are in temple, dressed in our finery, bowing our heads to God, doing our best to fast and adhere to the laws on at least this one day, and Isaiah, channeling God, tells us we are doing it all wrong. So, in the middle of fasting, in the middle of the service, in which rituals are paramount, Isaiah is questioning our ritual.

It seems like an odd and radical thing to do, to question the very way in which we are observing the holiday; it has a meta quality that Hendrix’s “Star Spangled Banner” also has. And by incorporating this recitation into our yearly ritual, we are extending that meta quality.

What does God really want from us? He tells us: He wants us to act ethically, to be compassionate, to be a member of a community. To be a mensch.

Part of what makes these passages beautiful is the extraordinary pivot from fury and sarcasm to kindness and generosity: God doesn’t linger on our misdeeds for long, nor does He speak of punishment or destruction. No: when you do these things, He says, when you help the poor and needy, when you pay attention to the weaker or less privileged, when your fast, your rituals, actually mean something, then you will not just be rewarded; you will be transformed; your kindness, God says, will become a mirror of mine. He promises us through poetry and imagery, a lush, almost Edenic future, in which we don’t go back to the garden, as Joni Mitchell said, but become it: “You shall be like a watered garden,” says Isaiah, “like a spring whose waters do not fail.” Then shall your light burst through like the dawn.

It was fascinating, I thought, that Cavett and Hendrix used the term “unorthodox,” in this context: My parents were Orthodox Jews, weekly shul-goers, who kept kosher and observed Shabbat and all the other holidays, major and minor. I was not always comfortable with their observance, which at times seemed rigid and oppressive to me as a child. But I never doubted my parents’ goodness, and I never saw a rift between their observance and their ethics. It wasn’t simply that they gave to charity — which they did, generously. They also gave themselves to synagogue life: my mother headed the sisterhood, my father, the education committee of the board, for years championing our tiny Hebrew school, the orphan of the Orthodox shul. My mother was a ubiquitous presence in synagogue, handing out candy apples and flags on Simchat Torah, volunteering with special needs children in the Hebrew School and helping out in the synagogue office, stuffing envelopes and schlepping boxes. But her heart was really bigger than that: She was someone whose humility, generosity, and sweetness came through in everything she did: She really did shine, as Isaiah promises, like a light in the darkness.

Her father had been a Torah scholar and a socialist, and I never thought my mother saw any difference between the two. She could not bear injustice. She made us understand that if anyone in the community was suffering, it took away from the rest of us. We could not be whole if others were not. People quickly heard that if you needed anything, a favor, a meal, a ride, a loan, or a sympathetic ear, you asked Tema Wolfson. She did not care about race or class. She was a friend to the custodian at the shul and to the woman who checked out groceries at the Daitch Shopwell supermarket, to my teenaged friends and to the aides in her classroom in Corona. She sent us the message that we were part of a larger community: That meant if you saw anyone on the street begging, you always gave them something. It meant that if you had a laborer performing a task in your home—whether they were painting the walls, doing yard work, or cleaning the house, you offered them a glass of water, a cup of coffee, a chance to rest their feet. Our door was literally open to everyone, from neighbors to Girl Scouts—she was a scout leader for years—to the wizened, shabby men who came around asking in Yiddish for money for their yeshivahs. And the larger world mattered too. We were taught to never cross a picket line, to never litter, both because you had respect for your community and because someone else would have to pick it up. I always thought the most generous thing my mother did—and I didn’t know about this until years later—was to be part of the hevrah kedishah, the group who watches over the body after death. This is considered a great mitzvah because you cannot be thanked by the person who has died. It is a selfless act, which exemplified my mother’s character.

My father was shyer and more private, a more difficult person. But two kindnesses stand out: one that I knew of but never considered during my childhood: after a Dutch business colleague, who had lived through the Holocaust, suddenly died of a heart attack in 1956, my father took on, across the ocean, some of the responsibility for the man’s five children. He became their “Oom Hendrik,” Uncle Henry, who for years remembered everyone’s birthday, visited them and sent cards, gifts, and candies, encouraging them and guiding them in their interests and studies, and doing small favors; I found out recently he had paid for the expensive textbooks for the eldest girls’ medical education.

The other was something connected to the synagogue which I witnessed and never forgot: A young boy who attended our synagogue belonged to a family that had many challenges, including financial problems, abuse, and mental illness. Women and men sat separately, and he had a nonobservant father who did not attend. One day the boy came in and stood alone in the men’s section, looking unmoored and adrift. Seeing him at the end of the row, my father spotted him and beckoned. He raised his tallised arm like a giant, feathered wing to pull the boy in and ushered him to a seat beside him, handing him his prayer book and showing him the place. For the next decade the boy sat with my father every Shabbos. And when my father died in the 1988, the boy, now a young man, remembered this kindness during a shiva call.

All we have to do is tweak Hendrix’s statement—“I played it because I’m an American” —a little bit. Why do we recite Isaiah? We do it because we are Jews. Because we are not just members of a tribe or a cult that slavishly carries out meaningless rituals; instead we are members of a community that takes care of one another, that ferrets out injustice and acts generously and charitably in the world. A community that each year fasts and comes to synagogue and recites the self-critical and beautiful verses of Isaiah, which demands that we do better. Which like the Hendrix anthem turns our own conventions on their head, and transforms us. We say it because we are Jews.

Penny Wolfson is the author of the memoir Moonrise, as well as numerous essays about disability, design, and Jewish culture. Her work has appeared in The New York Times, The Atlantic Monthly, Print, Good Housekeeping, Lilith, Motherwell, and other magazines, as well as in several anthologies, including Best American Essays.