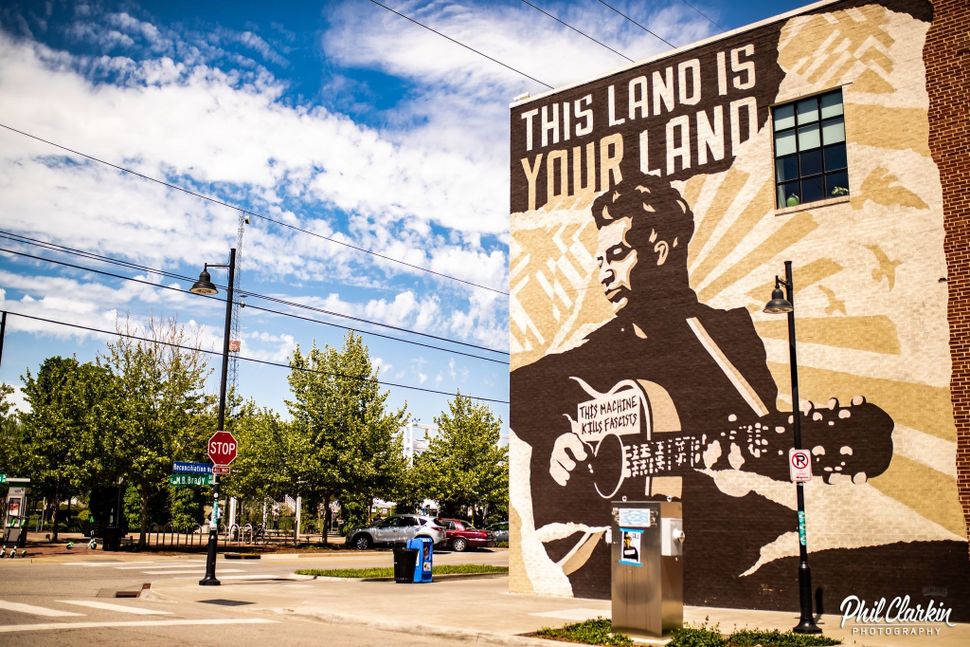 This Mural Kills Fascists: A Woody Guthrie mural looks down upon the streets of Tulsa, Oklahoma. Image by Phil Clarkin

Editor’s Note: Woody Guthrie was born on this day in 1912. In honor of that illustrious date, we are repubilshing this story that touches on Guthrie’s Jewish history.

In the summer of 2014, on the strength of a BMI-Woody Guthrie Fellowship, I spent a glorious few weeks researching in the archives in the Woody Guthrie Center in Tulsa, Oklahoma. The materials I found there not only fed into the writing of two books on Guthrie, but they also revealed some of the least known and most surprising aspects of the Dust Bowl Balladeer’s biography and output. During this trip, I discovered Guthrie’s irascible writings — song lyrics, essays, letters, free-verse poems — condemning the racist housing practices of his Brooklyn landlord in the 1950s, one Fred C. Trump. Guthrie’s opinions on the Trump empire, uttered from six decades beyond the grave (he died in 1967), would prove a major intervention in the presidential election of 2016.

During this trip, I also discovered the extent of Guthrie’s involvement with Yiddishkeit and Jewish history and culture. I had already known that Guthrie’s second wife was the celebrated Martha Graham dancer, Marjorie Greenblatt Mazia, daughter of Aliza Waitzman Greenblatt, one of America’s most celebrated Yiddish-language poets. I was already familiar with some of the Jewish-themed songs that Guthrie had recorded for his producer, Moses Asch (son of Sholem), in the late 1940s — songs like “The Many and the Few” and “Hanuka Dance.”

I had long enjoyed Guthrie’s many other songs as first recorded by the New York-based Klezmatics on their two albums, “Woody Guthrie’s Happy Joyous Hanukkah” and the Grammy-winning “Wonder Wheel.” But I discovered so much more in the archives, such as Guthrie’s conscious associations between the Jewish refugees from the Third Reich and the “Dust Bowl Refugees” whom he championed. I pored over his bitter writings on the Shoah, such as his excoriation of Ilsa Koch, the so-called “Beast of Buchenwald.” I learned of his contempt for Churchill and the British Empire in the context of the birth of the State of Israel, which he steadfastly championed. I read of his vision forged in the immediate wake of the anti-Semitic, anti-black, anti-communist Peekskill Riots against Paul Robeson in 1949, which he had personally witnessed. With the atrocities of Peekskill still resonating in his head when he moved into Fred Trump’s Beach Haven complex the following year, Guthrie sought a united front of Jews and African Americans to battle against the housing project’s de facto color line. Then there was Guthrie’s loving relationship with his mother-in-law, whom he called “Bubby Waitzman,” a friendship as much artistically based as it was familial, with their correspondence revealing sustained discussions on poetics and philosophy.

I was also amazed to learn of Marjorie Guthrie’s own part in the establishment of the Yiddish Book Center in Amherst, Massachusetts, now the country’s leading repository of Yiddish-language texts. As the center’s founder, Aaron Lansky, recounts in his memoir, “Outwitting History,” Aliza Greenblatt’s library, donated by Marjorie, was the earliest major foundation of the project. Lansky describes the occasion on which he went to collect the library from Marjorie and her daughter Nora:

After the boxes were safely loaded we sat down with Nora and Marjorie at the kitchen table. Nora served up fresh coffee and homemade cookies, and Marjorie began to speak about her own childhood and her lifelong relation to Yiddishkeit. Although Woody was not Jewish, she said, he always struck her as having a yidishe neshome, a Jewish soul. For one thing, he was a voracious reader: “One time my father gave him a copy of a tractate of the Talmud in English translation, and he read it over and over, highlighting the passages he liked with different colored inks.” He was also unusually helpful around the house. “Our Jewish neighbor used to watch Woody as he wheeled the carriage or helped with the chores. She was so impressed with his domesticity that one morning, while he was carrying out the garbage, she came up to him and said, ‘Woody, you’re a regular Jew.’ Woody said it was the nicest compliment he ever received.”

But by far, my most astounding discovery on this trip was a personal one. 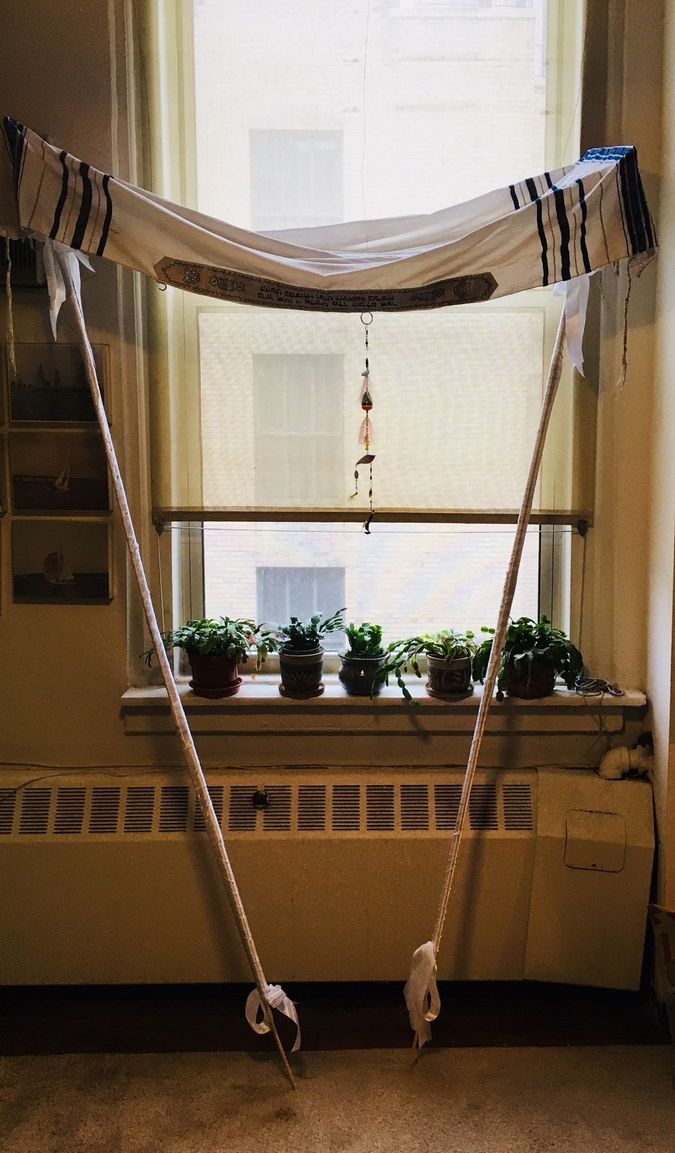 The Tulsa Tallis: Will Kaufman and Judy Blazer were married underneath this tallis that was found in Tulsa. Image by Courtesy of Will Kaufman

The Woody Guthrie Center situated at the corner of East Mathew Brady Street and North Boston Avenue in Tulsa. Painted on the center’s North Boston wall is Aaron Whisner’s massive mural of Guthrie, strumming a guitar famously emblazoned with his signature phrase, “THIS MACHINE KILLS FASCISTS,” beneath a larger banner that reads: “THIS LAND IS YOUR LAND.” Guthrie’s face is turned to the right, seemingly looking down upon a lone lamppost at the corner of Boston and Brady. One midnight, coming home from a late evening out with friends, I passed the Guthrie Center and saw, in the light of the streetlamp, wrapped around the base of the lamppost and bedraggled in the dust and mud, a white and blue piece of cloth. Coming closer, I realized it was a tallis. I looked around; the streets were empty. I almost rubbed my eyes. A tallis in, of all places, Tulsa, wrapped around the base of a lamppost outside the Woody Guthrie Center! Look – Woody himself seems to be beaming down upon it in some sort of benediction. How could it have gotten there?

I had no idea; but – finders, keepers – I unwrapped it from the lamppost and took it up to my hotel room, where I did my best to clean it by soaking it overnight in shampoo and water. The next morning I phoned my fiancée, the Broadway actress Judy Blazer (the cantor’s daughter whom Forward readers will remember as Bessie Thomashefsky in Michael Tilson Thomas’s celebrated concert documentary on his grandparents, “The Thomashefskys,” the pioneers of Yiddish theater in America). Judy said: “We will be married under that tallis. The ‘Tulsa Tallis!’ It will be our huppah.” 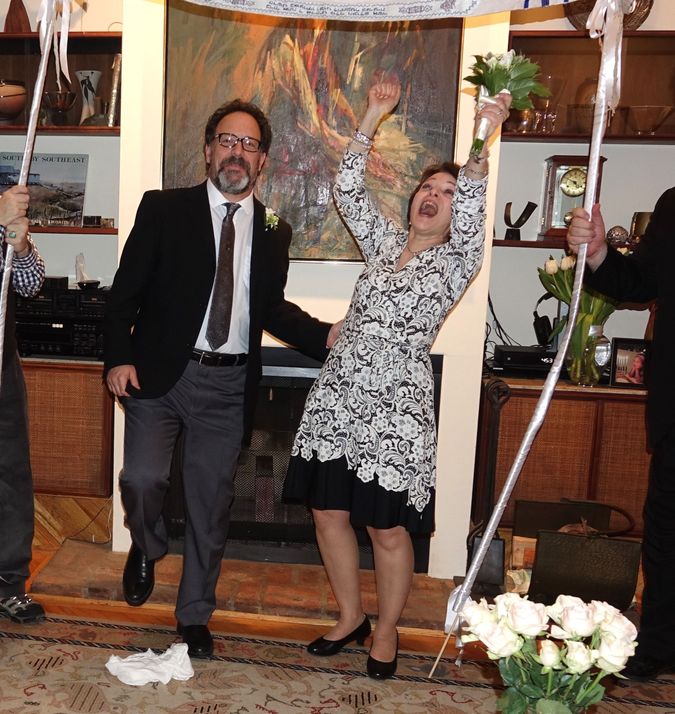 Bound For Glory: Will Kaufman and Judy Blazer celebrate their wedding. Image by Courtesy of Will Kaufman

In February of 2018, Judy and I were married in the Greenwich Village apartment of her uncle, Stanley Rosenberg, the architect who had designed the now demolished (and lamented) Lincoln Square Synagogue on New York’s Upper West Side. Uncle Stanley had also renovated the building in which he and his wife Ruth live: the old headquarters of the Communist Party of the USA, raided more than once by the FBI – and where Woody no doubt had dropped off some of his occasional columns for the Daily Worker, which was published on the lower floors of the building. As Judy and I stood beneath our huppah, the “Tulsa Tallis,” our lifetime pal Richard Brandt read out Woody’s free-verse ode to marriage and freedom, “I Say to You Woman and Man,” generously sent to us by Woody’s granddaughter, Anna Canoni. Its words are now inscribed in the elegant calligraphy of the katubah made by our artist friend, Eve Moscowitz Pardo, which concludes with an injunction from the Okie Bard who had blessed our union in his own irrepressible fashion:

Go dance/ That’s all/ Just jump up and let go and dance/ Dance in your own way/ Sing your own song/ Whoop your own kind of a yell in the start and in/ the finish of your own dance/ Go dance, both of you./ Go dance./

Will Kaufman is Professor of American Literature and Culture at the University of Central Lancashire, UK, and the author of “Woody Guthrie, American Radical,” (2011) “Woody Guthrie’s Modern World Blues” (2017) and “Mapping Woody Guthrie.” (2019)

Woody Guthrie, “I Say to You Woman and Man” © copyright Woody Guthrie Publications, Inc., all rights reserved, used by permission.