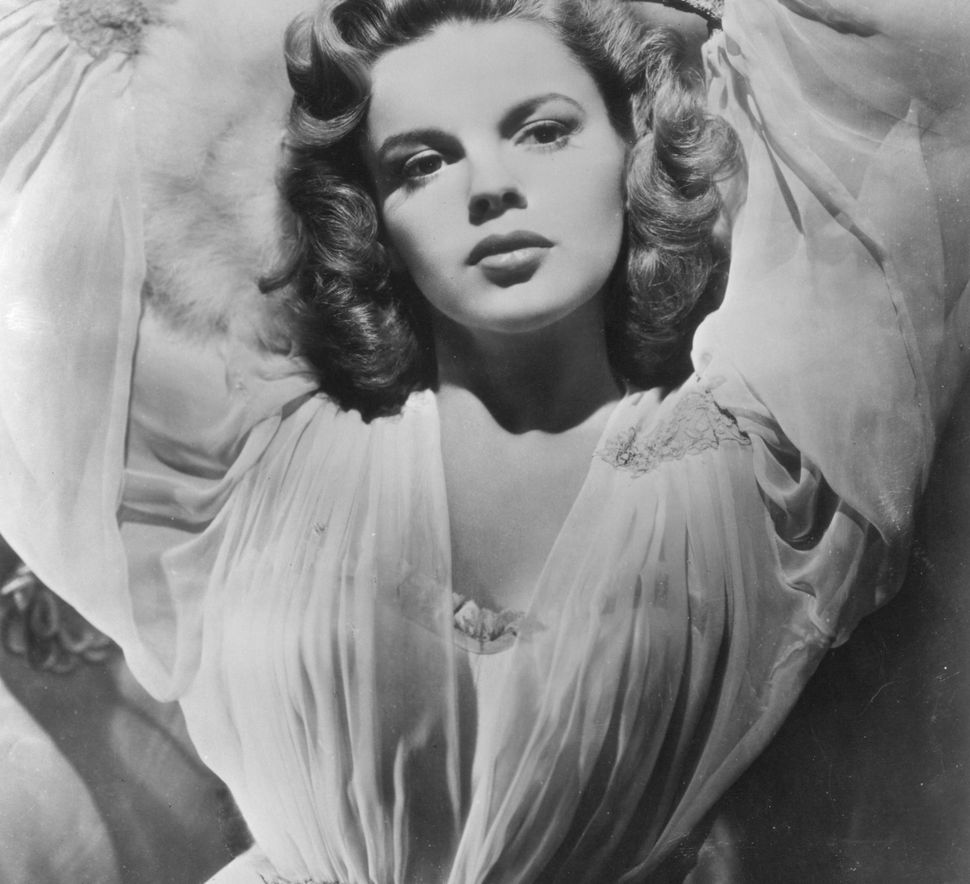 Editor’s Note: Judy Garland, who was born on June 10, 1922, would have turned 99 today. We take that occasion to explore the many Jewish affinities and associations of her career.

Although Judy Garland wasn’t Jewish, but several of her romantic partners were, including two of her five husbands. Many of her best-known songs were the product of Jewish songwriters, and some critics and historians have made the case that her musical role model was the Eastern European shtetl-born Asa Yoelson. That’s Al Jolson to you. Even the stage name given to Frances Ethel Gumm came from a Jewish entertainer — the most famous star of vaudeville, the New York City-born George Jessel, who once reportedly said, “I think that I ought to tell the folks that it was I who named Judy Garland ‘Judy Garland.’ Not that it would have made any difference – you couldn’t have hid[den] that great talent if you’d called her ‘Tel Aviv Windsor Shell’.” Still, good thing he didn’t.

Garland grew up performing in her family’s traveling vaudeville troupe, which eventually morphed into a sister act, the Gumm Sisters. The youngest of the three, Judy stood out from the beginning by virtue of her remarkably powerful voice and natural stage presence. In 1935, at age 13, she auditioned for Metro-Goldwyn-Mayer (MGM), performing “Zing! Went the Strings of My Heart” and “Eli, Eli,” a Yiddish song written in 1896. That was all Louis B. Mayer needed to see and hear; he signed her on the spot, and a star was born.

Within a few years, after appearing in a number of “backyard musicals” with an equally young Mickey Rooney, Garland was cast in “The Wizard of Oz.” The songs were all written by lyricist Yip Harburg (born Isidore Hochberg on Manhattan’s Lower East Side) and composer Harold Arlen (born Hyman Arluck, the son of a cantor). Incidentally, Garland was not the first to record “Over the Rainbow” – that honor belonged to Jewish swing-era singer Bea Wain, who turned in a more bluesy take on the number.

Around this time, although still a teen, Garland began dating. Her first serious romance was with jazz clarinetist and bandleader Artie Shaw (born Arthur Jacob Arshawsky in New York City). On her 18th birthday, she accepted a marriage proposal from songwriter David Rose (born Rosenberg), a London-born Jew who was raised in Chicago. Rose wrote a batch of TV theme songs, including ones for “Bonanza,” “Little House on the Prairie” and “Highway Patrol.”

The marriage to Rose didn’t last long, and after working with director Vincente Minnelli on “Meet Me in St. Louis,” the two married in 1945 and had a daughter named Liza the following year. Garland starred with Fred Astaire in the 1948 movie musical “Easter Parade,” featuring songs written by Irving Berlin (born Israel Isidore Beilin in Russia). By the end of the decade, however, trouble was brewing, and Garland began displaying the erratic behavior – likely resulting from her addiction to pills and alcohol – that would plague her for the rest of her life. She made several suicide attempts; a series of hospitalizations ensued; she was given electroshock therapy; and her lifelong struggle with her weight and appearance became all-consuming. By 1950, she was no longer employed by MGM.

Around this time, Garland met Sidney Luft, whose parents were Jewish immigrants from Russia and Germany. Luft became her manager and producer and helped stage the first of Garland’s several “comebacks” in a four-month sold-out tour of the UK followed by a stint at New York City’s Palace Theater. Her concerts were a tribute to her musical role model, Al Jolson. Writing in the New York Times in 1998, Camille Paglia said Jolson’s distinguishing characteristic was the way in which he “threw his booming voice to the rafters and made unembarrassed appeals for the audience’s love and approval,” as good a description as any of Garland’s concert stage technique. She went on to write that “Jolson’s melting, melodramatic voice can be heard coming through Garland,” and noted that Jolson’s songwriter and accompanist, Harry Akst, was one of those who discovered Garland on the road and helped her transition from vaudeville to Hollywood. It didn’t escape Paglia’s attention either that George Jessel played the Jolson role on Broadway in “The Jazz Singer.”

Luft went on to produce Garland’s critically acclaimed comeback to the silver screen, the 1954 version of “A Star Is Born.” While the original three-hour cut got great reviews, theater owners rebelled at its length, leading Jack Warner of Warner Bros. to slice and dice it down to an hour and forty minutes, which some blamed for Garland’s loss to Grace Kelly for the Best Actress Oscar. Groucho Marx famously sent Garland a telegram the next day reading, “Dear Judy, this is the biggest robbery since Brinks.”

It wasn’t to be Garland’s last Oscar nomination, however. Garland’s wholly dramatic role in Stanley Kramer’s “Judgment at Nuremberg” — in which she played Irene Hoffman, a German woman who had enjoyed a relationship with a Jewish man and was testifying on his behalf for the prosecution — garnered her a nomination for Best Supporting Actress. It was Garland as she was never seen before nor ever after.

In 1969 in London, Garland died of a drug overdose that was ruled accidental. She was 47 years old. In January 2017, it was reported in these pages that Garland’s children had her body exhumed from the Ferncliff Mausoleum in Hartsdale, N.Y., and moved to Beth Olam Cemetery, the Jewish section of the Hollywood Forever Cemetery in Los Angeles.