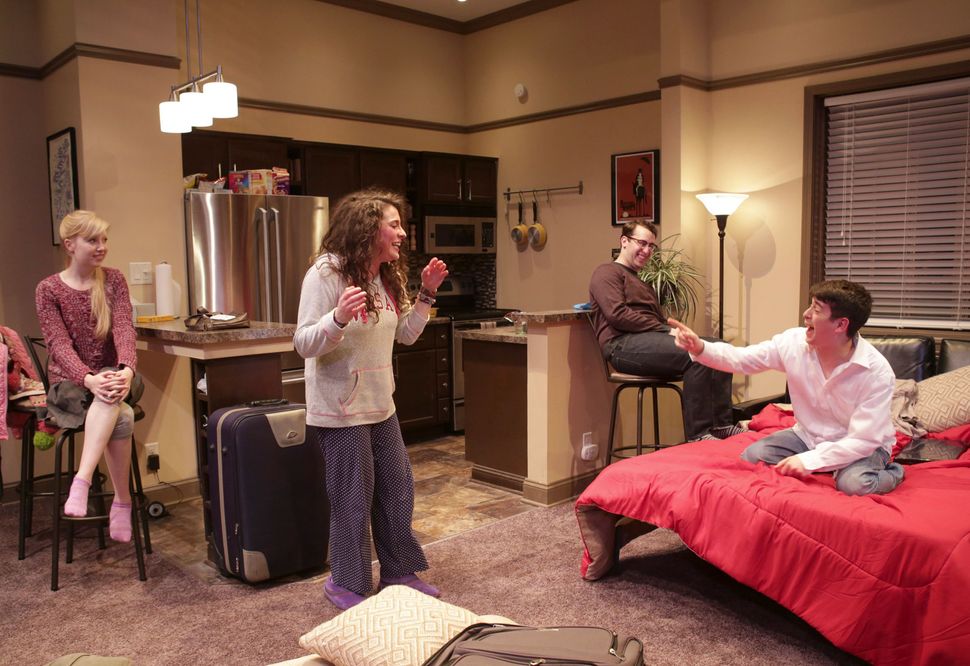 Yesterday, during rehearsals for Theater Wit’s production of Joshua Harmon’s “Admissions,” a drama about parents’ bullheaded efforts to get their child into his college of choice, the news broke among the cast and creative team.

A wide-ranging sting operation conducted by federal authorities led to the indictment of 50 people —- including the actresses Felicity Huffman and Lori Loughlin —- caught in a web of high-priced bribes, falsified test scores and even doctored photos of children playing sports used to secure students’ placement at elite universities. The details were revealed Tuesday in court documents that identified a California man named William Rick Singer, CEO of a company called “The Key” as the mastermind. The bombshell report was life imitating art, and it coincided with a Washington, DC run of Harmon’s play, which premiered in New York last year. The Washington Post’s book critic, Ron Charles, cannily tweeted that the news “may be the greatest gift Joshua Harmon’s play could ever get” and linked to The Post’s review of the production.

But while DC’s Studio Theatre is closing “Admissions” later this month, Theater Wit in Chicago is still in the early stages of rehearsal and is taking the lesson.

“Admissions” is mainly concerned with probing the hypocrisies of white liberals on the issue of diversity programs in education. The Masons, the central family of the play, are a well-meaning clan whose matriarch, Sherri Rosen-Mason, is an admissions officer for a New Hampshire boarding school who prides herself on her record of inclusion. But she has to confront a mounting dissonance when her own son Charlie is shut out of Yale while his black friend Perry gets in. The play’s director, Jeremy Wechsler, believes the story of federally investigated malfeasance and the Masons’ attempts to rebound from Yale’s initial decision are of a piece.

“Today was an amazing example of the toxicity of white privilege —- in this case turning into actual criminal activity,” said Wechsler, who is also Theater Wit’s Artistic Director. “Who knows what’s going through these parents’ minds, but in the course of this play I could certainly imagine a parent saying ‘listen, the deck is stacked against our kids and we have to use every lever possible for them. With all these diversification efforts there are fewer seats than ever. I have to build a seat with $10,000 bills.’”

As major news outlets picked up the extensive records of the probe into Singer’s network, and phones in the rehearsal room began to chime, Wechsler and his cast stopped their scene work to do research. They had already been reading extensively about diversity initiatives in colleges and high schools, the biases of admissions officials and financial pressures inherent to institutions that rely on major donors. In the play the Masons try and massage their connections while fretting that their embittered son might become something of a bigot.

Because it is a play by Harmon, the author of “Bad Jews,” how the Chosen People fit into the intersectional matrix also gets some room to breathe.

“At one point Charlie, at his inevitable low of least wokeness, is distressing that his family’s Jewish,” Wechsler said. “His grandfather’s cousins were killed in Auschwitz, he escaped and 70 years ago his grandfather couldn’t get into an Ivy League school cause there were quotas against Jews which have since been lifted. They figured out how to get Jews in [by changing their status]. ‘They just turned us white’ is his line. It’s a shocking misinterpretation of what is actually happening but it is a tricky problem for the Jewish community to think about.”

Theater Wit believed “Admissions” would be a draw regardless of the news cycle — it premieres on March 21 and runs through April and May, a time when Chicago families are thinking a great deal about college and high school acceptance. But Wechsler thinks that the new scandal’s hold on the public imagination will further enrich the company’s post-show discussions with the audience. Unlike the charged parties in the headlines, the play’s characters never dabble in criminal activities, but they do demonstrate the ways college gatekeepers can be unfairly persuaded within the law and the anxiety surrounding the prospect of rejection.

“I think the most interesting people indicted aren’t the famous people but the rank and file people who have money and power but who are invisible to the culture,” Wechsler said. “All these people thought that if they didn’t do this some critical opportunity would be taken away from them. Weirdly just yesterday we were reading this article in Psychology Today that said ‘you know what? It doesn’t matter what college you go to.’”