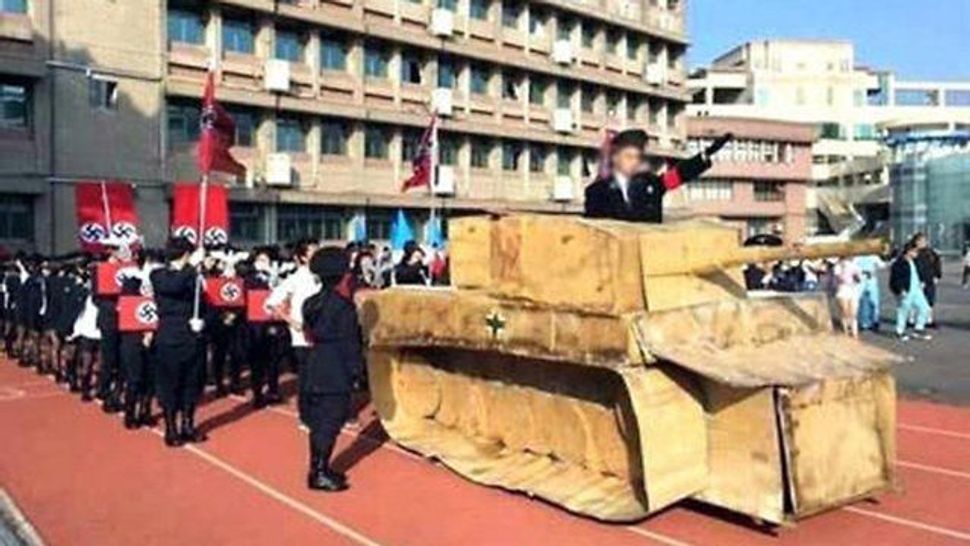 Israel’s consulate in Taiwan is not happy after local high school students held a Nazi parade as part of holiday celebrations, something that the students reportedly saw as dress-up.

“Schools should educate for tolerance and understanding among people, and we are deeply disappointed that this took place in Taiwan,” the Jewish state’s diplomatic mission in the Taipei, the East Asian country’s capital, wrote on Facebook. “We strongly condemn this tasteless occurrence and call on the Taiwanese authorities, in all levels, to initiate educational programs which would introduce the meaning of the Holocaust and teach its history and universal meaning.”

Students at Kuang Fu High School wore Nazi armbands, threw up Third Reich salutes and even designed their own cardboard tank for the event. The school said that the teacher overseeing the parade had recommended against choosing Nazi Germany as its theme, but had respected the wishes of students, who overwhelmingly voted to make that their focus.

After photos of the event circulated online and stirred controversy, high school principal Cheng Hsiao-Ming said that he would resign his post and in the meantime strengthen his institution’s Holocaust education, by screening movies like Schindler’s List.