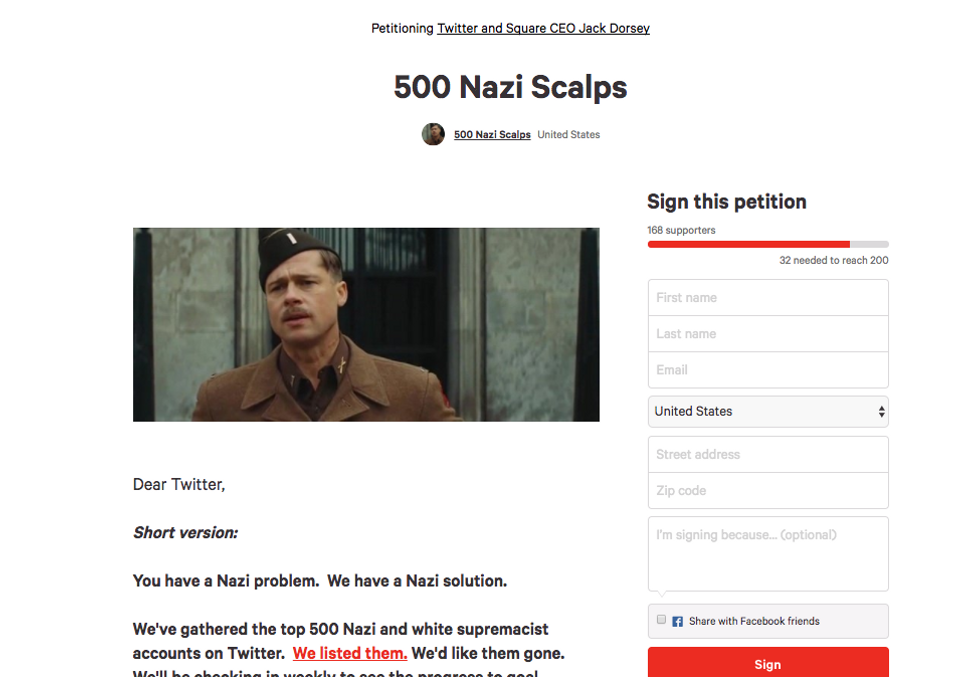 That’s what an anonymous Change.org petition is charging, listing information on hundreds of “Nazi and white supremacist accounts” and demanding the social media platform boot them off.

“Twitter is brimming with active Nazis who use your platform as a tool to recruit members, spread hate, and harass other users,” reads the petition, addressed to Twitter and the company’s CEO, Jack Dorsey. “We’ve gathered the top 500 Nazi and white supremacist accounts on Twitter. We listed them. We’d like them gone.”

The petition was created in early January and as of Friday afternoon it had 168 supporters, none of them named. Twitter has seen a massive uptick in hate speech over the past year, and recently introduced a number of new features to combat online abuse, such as a tool that lets users mute certain words, phrases, usernames, emojis or hashtags.

Twitter also removed a number of accounts associated with the white nationalist “alt-right,” such as white nationalist Richard Spencer and his Radix Journal, although Spencer’s account has since been restored.

Responding to a query about the petition, a representative from Twitter wrote that the company would “take action on accounts violating the “Twitter Rules,” which “prohibit violent threats, harassment, hateful conduct, and multiple account abuse.”

The petition calls for “500 Nazi Scalps,” a reference to oft-quoted line in the 2009 film “Inglourious Basterds.”

White nationalists mocked the petition online, joking among themselves about where their names appear in the list, which ranks the accounts based on their numbers of followers.

Nathan Damigo, a leader of the white nationalist group Identity Evropa, wrote back and forth with Steven Falco, a college student who says he opposes Black Lives Matter and leftists but supports “cultural libertarianism,” and “Western civilization — and happens to be Jewish.

@nunzioni Did you make it?

@NathanDamigo Thanks lol. I wonder if I’m the most prominent Jewish Nazi.