Got Nazis? Milk Is New Symbol Of Racial Purity For White Nationalists 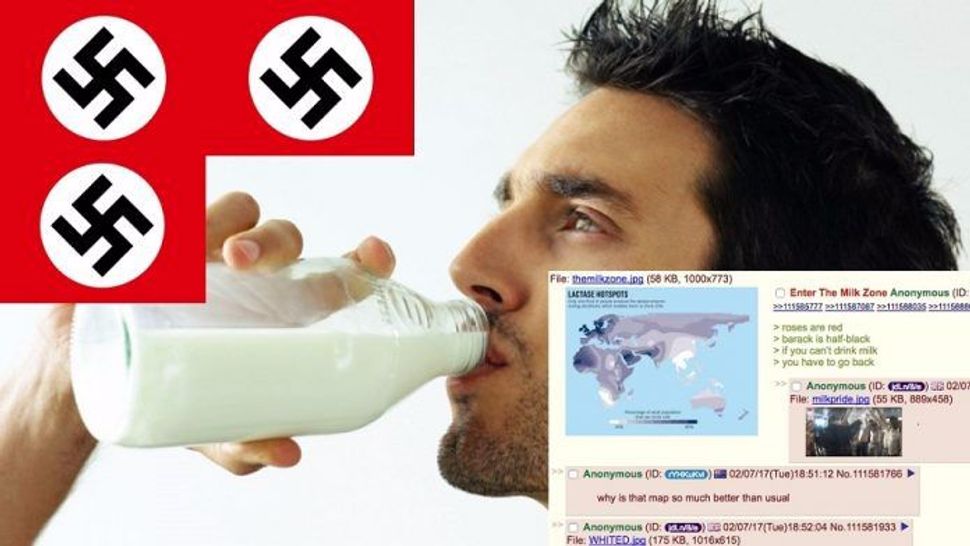 First it was Pepe the Frog, a seemingly benign cartoon character, appropriated by white nationalists and now listed in the Anti-Defamation League’s database of hate symbols.

Earlier this month, a cadre of white nationalists stormed Shia Labeouf’s since-shuttered art installation in New York to dance and chug gallons of whole milk. They were also shirtless.

The connection between white nationalism and milk likely dates back to a meme that circulated on 4chan, an online forum and haven for the “alt-right,” which suggested there was a geographic “milk zone” in Europe — and that whites today are better fit to digest milk more than any other ethnic group. “Alt-right” is the label preferred by contemporary white nationalists.

Meanwhile, the “alt-right”-leaning website Ageofshitlords.com dismissed the attention as all part of an elaborate “alt-right” prank that had gotten out of hand.

“Shitlord” is slang for someone who posts deliberately inflammatory comments online with the intention of distracting readers or derailing a conversation, an act known as “shitposting.”

“Nobody actually takes these memes literally,” an unbylined article on the website read. “Just as nobody thinks every black person on the planet is fatherless, or every Muslim on the planet is a terrorists [sic], nobody on 4chan actually believes that the ability to drink milk in [sic] genetic. It’s just ironic meme shitposting.”

Following the milk-chugging scene — and the Mic.com write-up — “alt-right” Twitter reveled in the attention.

Richard Spencer, a leading thinker of the “alt-right,” inserted an emoji of a glass of milk into his Twitter handle. (This replaced an emoji of a frog, a reference to Pepe.)

@AltRightReport we must secure an existence of our people and a future for white milk.

Got Nazis? Milk Is New Symbol Of Racial Purity For White Nationalists