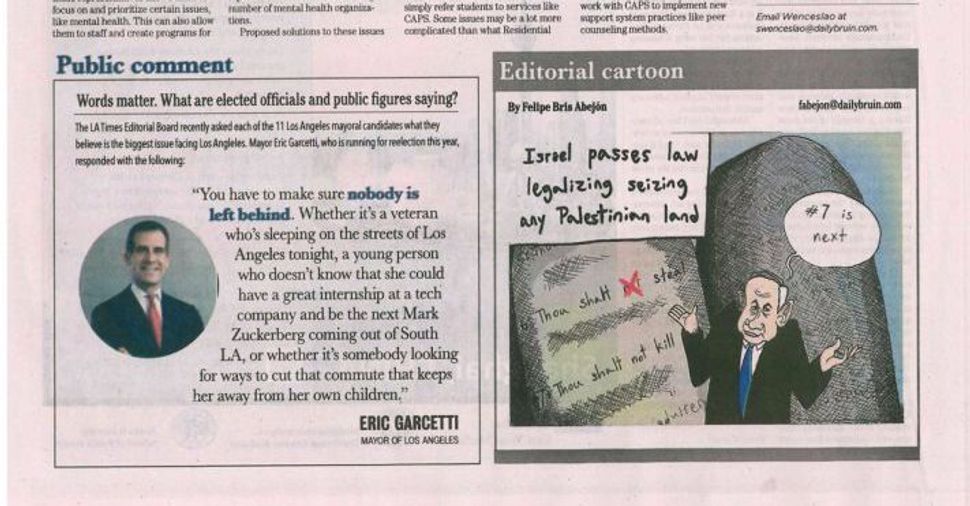 LOS ANGELES (JTA) — A cartoon called anti-Semitic that was published in the University of California – Los Angeles student newspaper has been strongly condemned by civic and campus organizations, among them a pro-Palestinian student group.

The cartoon published Monday in UCLA’s Daily Bruin shows Israel’s Prime Minister Benjamin Netanyahu standing in front of two stone tablets inscribed with the Ten Commandments. However, in the commandment “Thou Shalt Not Steal,” the word “not” has been crossed out in red.

Pointing to another commandment “Thou Shalt Not Kill,” labeled as the seventh by the cartoonist, Netanyahu shrugs his shoulders and says, “#7 is next.”

In the upper left corner of the cartoon, the legend reads: “Israel passes law legalizing seizing any Palestinian land.”

The cartoonist, Felipe Bris Abejon, is an undergraduate student in political science, who last year served as education and resources director of the UCLA chapter of Students for Justice in Palestine, or SJP, a strongly anti-Zionist and pro-Palestinian national student group.

A statement by the Anti-Defamation League denounced the cartoon as “deeply offensive… and impugning core Jewish beliefs.”

The editor of the paper apologized for the cartoon.