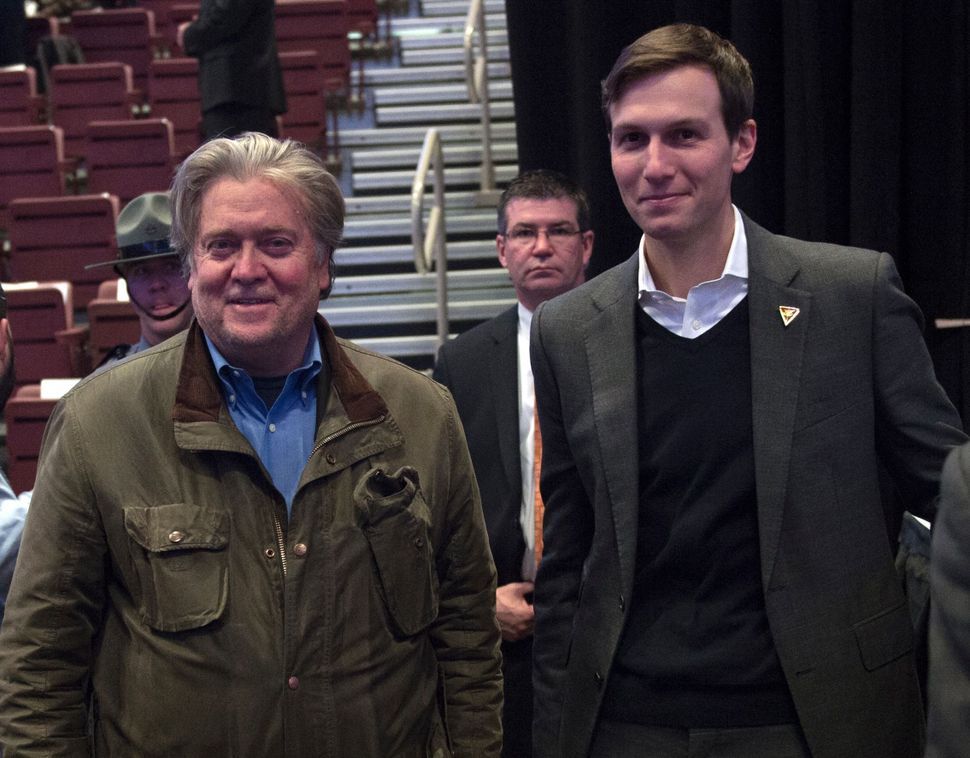 Stephen K. Bannon and Jared Kushner listen to a Donald Trump speech on December 15, 2016 in Hershey, Pennsylvania. Image by gettyimages

Jared Kushner is widely perceived as a moderate in President Donald Trump’s White House — a socially liberal New Yorker hailing from a family of Democrats. But that impression might be wrong, according to reports that he’s become a backer of chief strategist Steve Bannon’s nationalist-populist agenda.

The latest court gossip reports that Trump’s son-in-law – far from being furious about the Muslim ban – in fact supported it, Vanity Fair alleged based on an unnamed source said to be friendly with Kushner. The anonymous individual told the publication that Kushner has “always been far more defensive of Donald and their policies than the general public has believed. Most of the time, he is defending everything in the administration.” Kushner has even proposed knocking down the walls between his and Bannon’s office, a sign of how close the two are, the magazine claimed.

The gossip seems to contradict what’s known about Kushner’s role in the administration and some of his public pronouncements. He and wife Ivanka Trump were said to be instrumental in quashing an executive order that would have ended Obama-era protections for LGBTQ working for the federal government or its contractors, and Kushner has privately told business leaders that his father-in-law did not believe conspiracy theories that he spread and that he would govern from the center.