Awkward Greetings As The Trumps and Netanyahus Meet 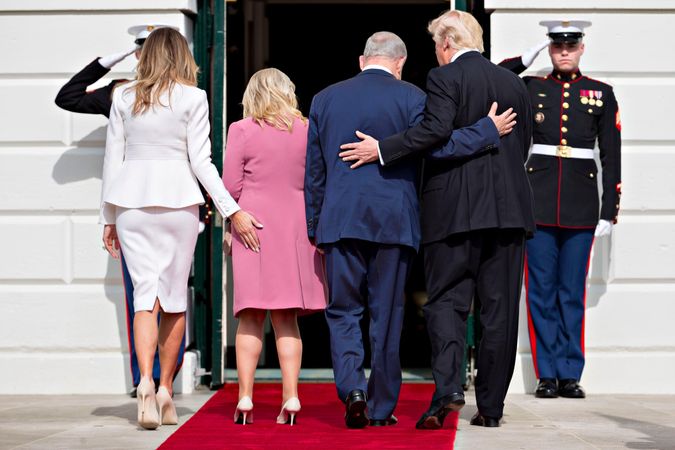 Yesterday’s White House greeting between the Trumps and the Netanyahus was rife with awkward moments between the two first couples.

It started out with a stilted exchange between President Trump and First Lady Netanyahu and ended with Melania Trump’s hand on Sara’s Netanyahu’s behind.

Trump cozied up to Netanyahu at Wednesday’s meeting between the world leaders, but he kept Netanyahu’s wife at arm’s length when the two couples met outside the White House.

That was a contrast to the uncomfortable encounter between Trump and Sara Netanyahu. Trump, who is known for his aggressive, jerking handshakes, was seen pumping Sara Netanyahu’s hand. But he didn’t draw closer; instead of cheek kisses, the two continued their greeting with mild hand gestures at a distance of a few feet.

A press photo from behind revealed another strange moment between the two couples. In the picture, Netanyahu and Trump walk together in a friendly side embrace. Meanwhile, Melania Trump appears to have her hand on Sara Netanyahu’s rear end, guiding her into the White House.

Awkward Greetings As The Trumps and Netanyahus Meet