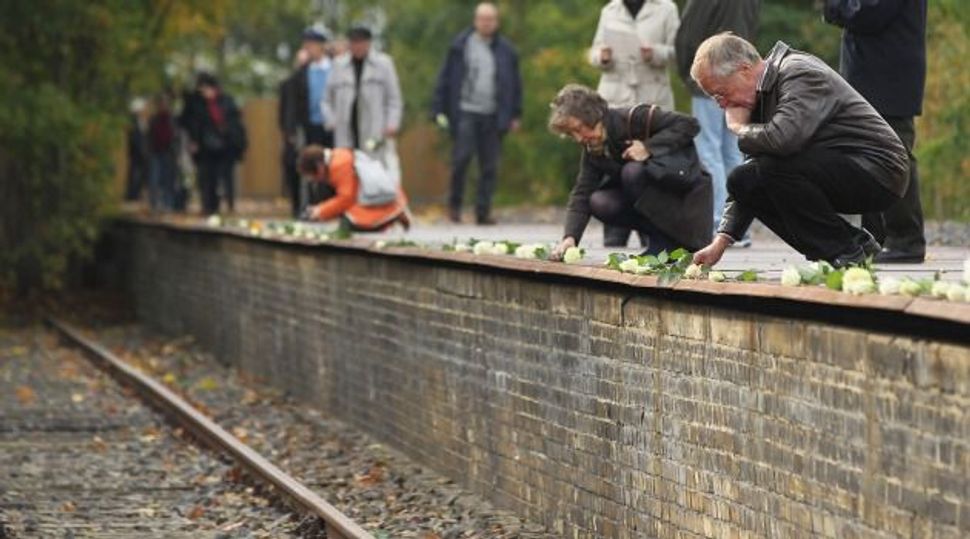 Somber Milestone: Mourners lay flowers at the site of Berlin?s rail line that took Jews to death camps on the 70th anniversary of the deportations. Image by getty images

BERLIN (JTA) – With anti-Semitic incidents reportedly on the rise in Berlin, Jewish leaders in the German capital are renewing their call for an official federal commissioner to deal with the problem.

The Berlin-based Research and Information Office on Anti-Semitism, founded in 2015, reported Monday that the number of anti-Semitic incidents in Germany’s capital has risen by 16 percent in 2016 over the previous year. Most incidents were non-violent, but nonetheless threatening.

The increase has prompted renewed calls for a permanent federal commissioner, to help ensure that the government won’t drop the ball when it comes to fighting anti-Jewish hate, Deidre Berger, head of the American Jewish Committee office in Berlin, said in a statement Monday.

According to the Research and Information Office on Anti-Semitism report, a total of 470 anti-Semitic incidents were reported in Berlin in 2016, including 7 physical attacks, 18 verbal threats, 53 cases of damage to Jewish-owned property or Holocaust memorial sites, as well as 382 cases of harmful behavior.  Of the latter, 152 were cases of Internet threats against Jews or Jewish institutions. Another 150 cases of anti-Semitic propaganda, graffiti and threatening letters were reported. There were no cases of extreme violence reported to RIAS last year.