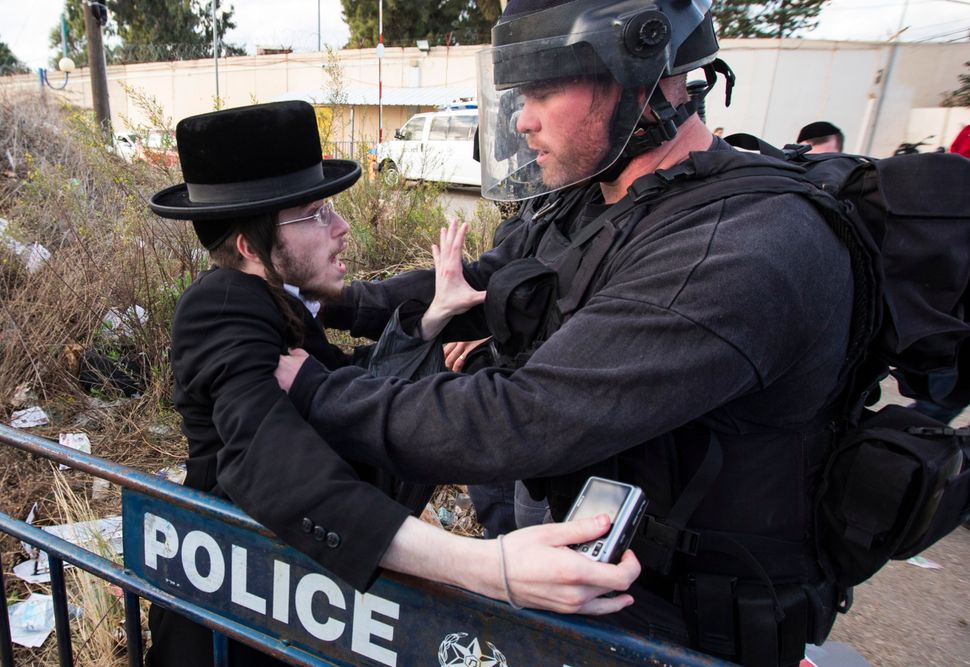 A confrontation between an ultra-Orthodox protester and an Israeli policeman during a 2013 protest over the arrest of a man who refused military service. Image by Getty Images

Ultra-Orthodox protesters have threatened to disrupt the Jerusalem marathon on Friday unless the police release a Haredi army defector.

According to the Israeli news site Ynet, the defector is a follower of Rabbi Shmuel Auerbach, a leader of the Lithuanian Haredi Ashkenazi community in Jerusalem who opposes enlistment in the Israeli Defense Forces.

A Haredi group claimed that the defector, who was unnamed in the article, was arrested when he was at home during the Purim holiday after he refused his enlistment orders.

Followers of Auerbach have claimed that “unprecedented chaos” at the Jerusalem Marathon will follow if a military court refuses to release him at a hearing today. They have threatened to block streets.

Over the past several weeks, protests have flared in ultra-Orthodox neighborhoods as Haredi men resist enlistment.

The ultra-Orthodox are mandated to enlist in the army, though many do not serve because of an exemption that allows them to study instead. Haredim say that their Torah study is its own contribution to the Jewish state.