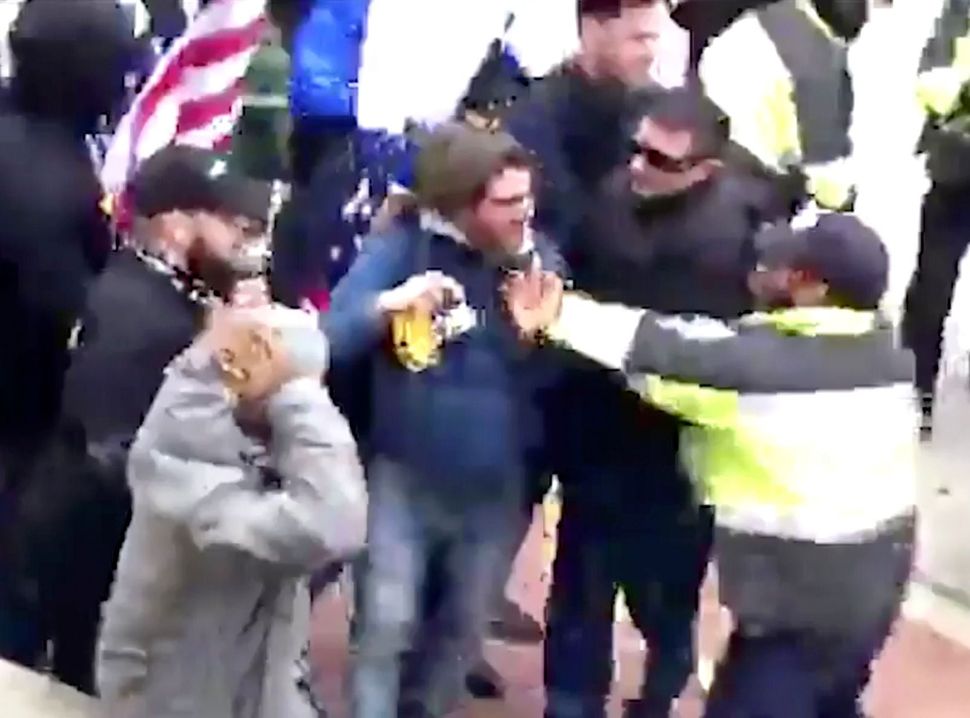 A fight with the Jewish Defense League outside the American Israel Public Affairs Committee left one Palestinian-American protester bloodied and bruised and resulted in the arrest of two Jewish men.

A video of the fight was uploaded on Twitter by a freelance journalist.

A pretty rough fight broke out early on. Here’s what I saw. One guy came out bleeding badly, police took him to an ambulance. #AIPAC2017 pic.twitter.com/MGOP8Je1ZK

The Institute of Middle East Understanding identified the man beaten to the ground as Kamal Nayfeh, a father of four and an instructor at Central Piedmont Community College in Charlotte, North Carolina. Nayfeh was taken by ambulance to George Washington University Hospital and treated for his injuries.

Two men were later arrested, one charged with a misdemeanor and another with felony assault, the Washington Jewish Week reported.

The Metropolitan Police Department identified the two people who were arrested as Yosef Steynovitz and Rami Lubranicki. An article on the conservative website Politichicks named Lubranicki as the creator of the group American Bikers United against Jihad.

Steynovitz was charged Monday with assault with significant bodily injury, which is a felony. Lubranicki was charged with simple assault, a misdemeanor, according to the Washington Jewish Week article.

Meir Weinstein, head of the Canadian branch of the JDL, claimed his group was acting in self defense and that the video was taken out of context. “If our reaction was excessive, we’re looking into it. It was all defensive,” Weinstein said.