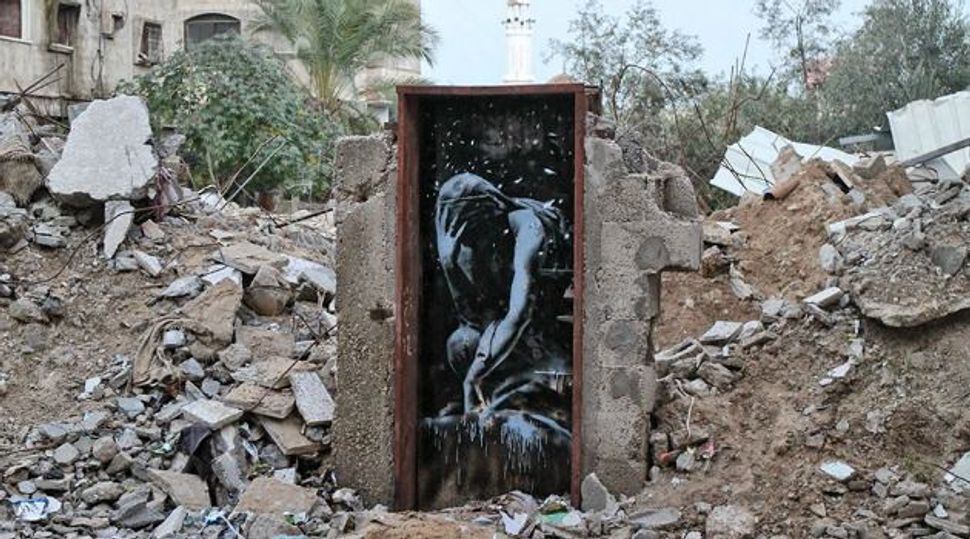 Banksy’s art in Gaza following the 2014 war between Hamas and Israel.

A woman claims to have captured footage of the elusive British artist Banksy at work on an exhibition in an Israeli mall.

The woman said she went into a mall in Herzilya, north of Tel Aviv, and a security guard asked her to sign her name. She noticed an English name on the list and inquired with the security guard, who told her it was “an artist from England,” according to a report in UK paper the Daily Mail.

Entering the mall, she saw a man holding a stencil with a bucket hat and camouflage pants. She realized it could be Banksy and she started filming as the man covered his face.

Banksy has an exhibit, The Art of Bansky, in the Arena Mall in Herzilya in April.

The artist recently opened a hotel in Bethlehem in view of Israel’s separation barrier called The Walled Off Hotel. The hotel’s decorations includes artistic commentary on the Israeli occupation like a bust surrounded by material made to look like the gas of a tear gas canister.