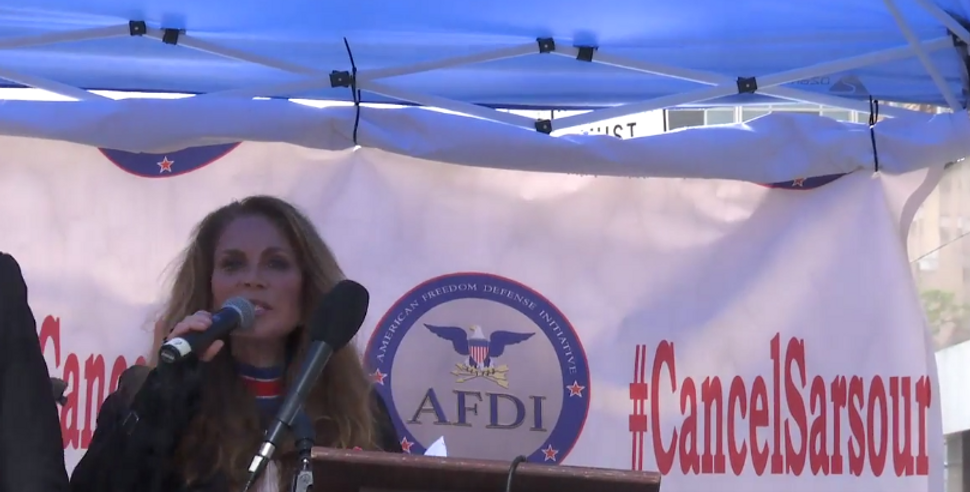 As the rain poured down in New York City, right-wing firebrands Milo Yiannopoulos and Pamela Geller led a demonstration against Linda Sarsour’s invitation to speak at a CUNY commencement ceremony in a rally that featured anti-Islam rhetoric and drew fierce counter-protest.

“Linda Sarsour supports this ideology that oppresses women, subjugates women, gender apartheid, honor killings,” said Geller, as she stood on a platform near Times Square. “Islamophobia is a word created by fascists, used by cowards, to manipulate morons.”

“Linda Sarsour is a Sharia-embracing, terrorist-embracing, Jew-hating ticking time-bomb of progressive horror,” said Yiannopoulos, the ex-Breitbart editor who resigned after past remarks about pedophilia caused a scandal.

As the speakers denounced Sarsour, counter-protesters shouted slogans of “no fascism” and “no KKK.” Geller dismissed them as “lily white snowflakes.” Geller also led her backers in the singing of “Am Yisrael Chai,” an anthem affirming Israeli identity.

Sarsour, a Muslim civil rights activist who organized the January Women’s March, will deliver a commencement address next week to graduates of the city university’s public health school.

Her past statements defending Saudi Arabia’s women rights records and Islamic regulations known as Sharia law led to controversy surrounding her appearance at the graduation event.