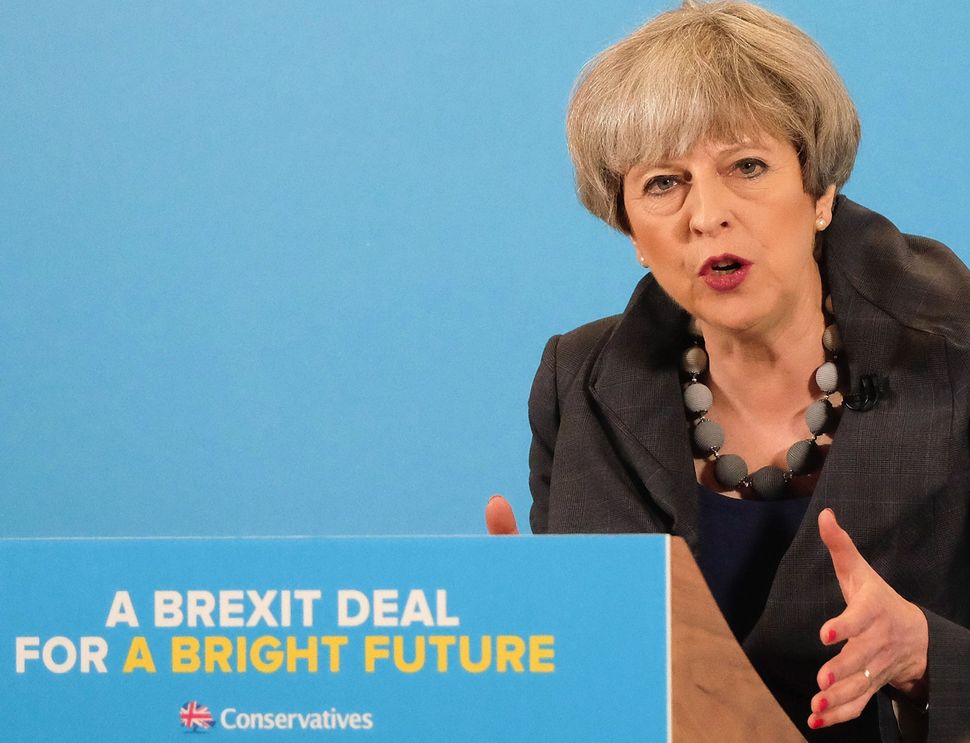 A giant campaign banner hung in a popular outdoor venue in one of England’s largest cities on Tuesday shows Prime Minister Theresa May in Star of David-shaped earrings, which some Jewish observers called “anti-Semitic.”

The banner, which was hung Tuesday at the Bear Pit roundabout in Bristol, lists positive statements about Labour Party leader Jeremy Corbyn and negative ones about May.

“I know it’s a political banner, and I know it’s anti-Theresa May, but why include the Star of David?” one Jewish passerby told the Bristol Post. “I think it’s anti-Semitic. I’m stunned that we, as a society, have gone back to this. I can’t believe stuff I haven’t heard of, or seen since I was a child is now happening again. It makes me sick.”

One of the phrases listed next to May was “Balfour,” a reference to the Balfour Declaration, which was issued by the British government nearly 100 years ago and called for “the establishment in Palestine of a national home for the Jewish people.”

Political organizer Nina Masterson told the post that the earrings, which were just “a tiny element of the whole banner,” were not anti-Semitic but rather a reference to May’s support of Israel.

“I have Jewish friends, and my half brother and sister are Jewish,” she said. “This is about foreign policy.”

According to recent polling, 77% of British Jews are expected to vote in Thursday’s election for May’s Conservative Party and only 13% for Labour. Corbyn, the Labour leader, has been heavily criticized by Jewish groups for his repeated public appearance with anti-Semites and whitewashing of an internal report into anti-Semitism within the party.