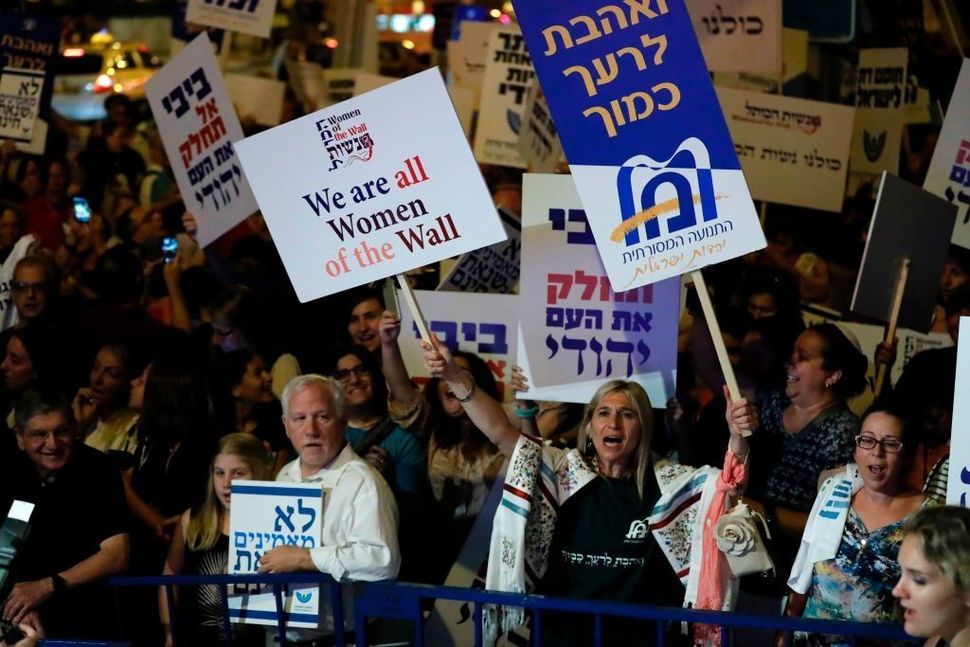 Israeli protesters gather outside Prime Minister Benjamin Netanyahu’s residence in Jerusalem on July 1, 2017, to demonstrate against a government decision to abandon a deal to allow women and men to pray together at the Western Wall. Image by Getty Images

JERUSALEM (JTA) — Hundreds of people gathered in front of the Prime Minister’s Residence in Jerusalem to protest government moves seen as targeting liberal streams of Judaism.

The protesters who gathered in Jerusalem on Saturday night carried signs including “Judaism without coercion,” and “We are all Women of the Wall.”

The demonstration was organized by liberal movements of Judaism and the Women of the Wall organization.

“We came to the Wall every month. We ‘voted with our feet.’  We fought for equality. The Prime Minister understood. That’s why he initiated the negotiations. That’s why he brought the agreement to a vote. It gave us hope. Hope for democracy. Hope for the people of Israel,” Anat Hoffman, chairperson of Women of the Wall, said in an address to the crowds. “But suddenly, he changed his mind. Suddenly, he gave in to the ultra-Orthodox.”

The demonstration began after the end of Shabbat with a Havdallah service and religious songs.

Israel’s Cabinet last week froze a previous government decision to expand a non-Orthodox prayer section at the Western Wall.  The same day, a ministerial committee approved a bill that would have made the haredi Orthodox-dominated Chief Rabbinate the only body authorized by the government to perform conversions in Israel. On Friday, the Prime Minister’s Office announced that the legislation will not be considered for six months while a “team” he will appoint comes up with recommendations for an “arrangement” on the issue.