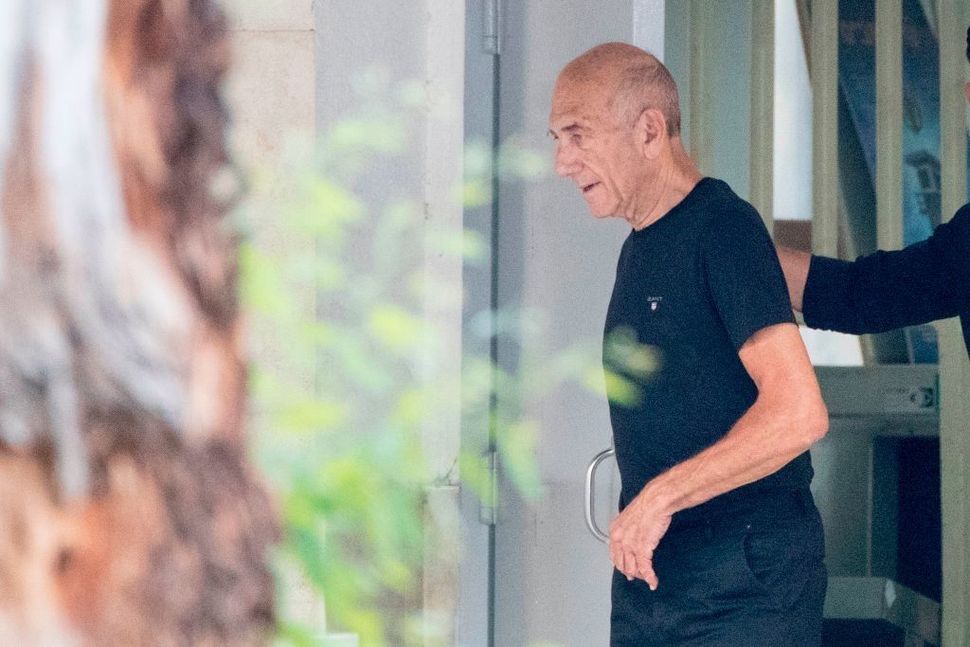 How The Mighty Have Fallen: Former Israeli Prime Minister Ehud Olmert leaves prison after being convicted of graft charges and serving 16 months. Image by Getty images

Olmert left prison early Sunday morning after serving 16 months of a 27-month sentence. The prison parole board on Thursday granted him early release for good behavior.

Later Sunday morning, Olmert appealed to Israeli President Reuven Rivlin, requesting him to limit the parole restrictions to his time served in prison.

Among the restrictions are a prohibition on leaving the country, meeting with a parole officer twice a week and meeting weekly with a Prisons Service social worker. The restrictions are set to be lifted in May 2018, when Olmert would have completed his original sentence.

Olmert was writing an autobiography while in prison, which may have touched on sensitive security issues. Last month, one of his attorneys was caught leaving the prison with a chapter that discussed a top secret security-related incident that the military censor has banned in the past for publication.

Olmert resigned his post in September 2008 after police investigators recommended that he be indicted in multiple corruption scandals. He was convicted of receiving bribes in the Holyland affair, which involved the payment of bribes to government officials by the developers of a luxury high-rise apartment complex in Jerusalem.

Olmert also was convicted for accepting cash-filled envelopes from American-Jewish businessman Morris Talansky and using it for personal expenses.