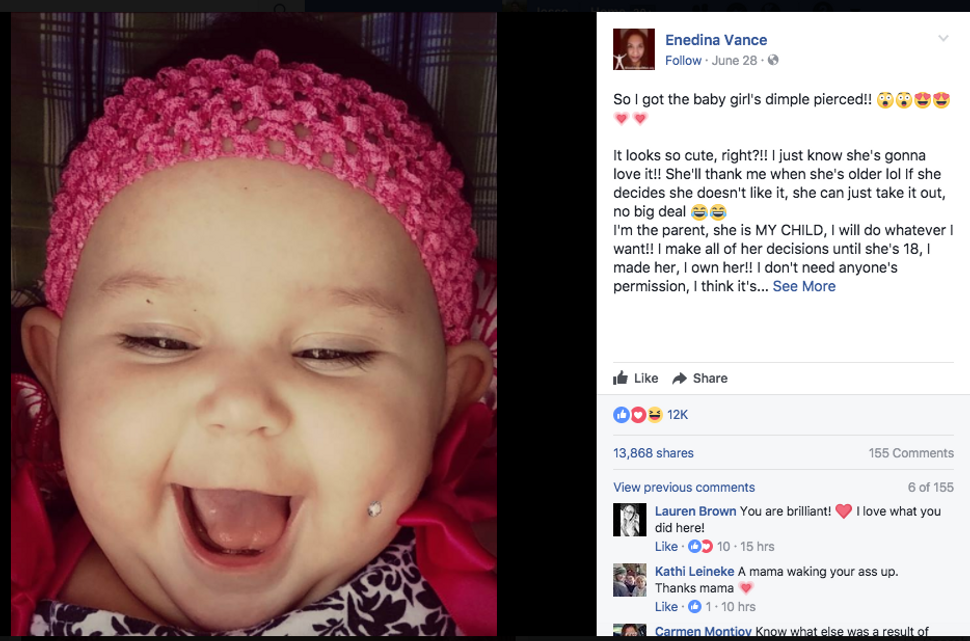 Endina Vance shared a photo on Facebook of her infant daughter with a newly pierced dimple with a stud. “I’m the parent, she is MY CHILD, I will do whatever I want!! I make all of her decisions until she’s 18, I made her, I own her!,” the caption read. Soon, the post had racked up thousands of comments and reactions, some calling Vance an “abusive and an unfit mother,” and others reporting calls to Child Protective Services.

Just one problem—the photo was a fake.

The photo, Vance said, was created to make a point about about circumcision, which she opposes. Still, she was surprised by the backlash.

“I seriously can not believe how many people missed that this was purely satirical,” she said, “I actually used the hashtag #sarcasm lol[…]”

“How is it so triggering, so enraging to see my baby with a pierced dimple, but actually knowing a baby is being strapped down & forcibly having his most sensitive & innervative portion of his penis amputated, seems perfectly ok??” she wrote in a follow-up. “How can society threaten death over one, but encourage & support the other? Piercing is bad, but cutting is accepted as the norm?”