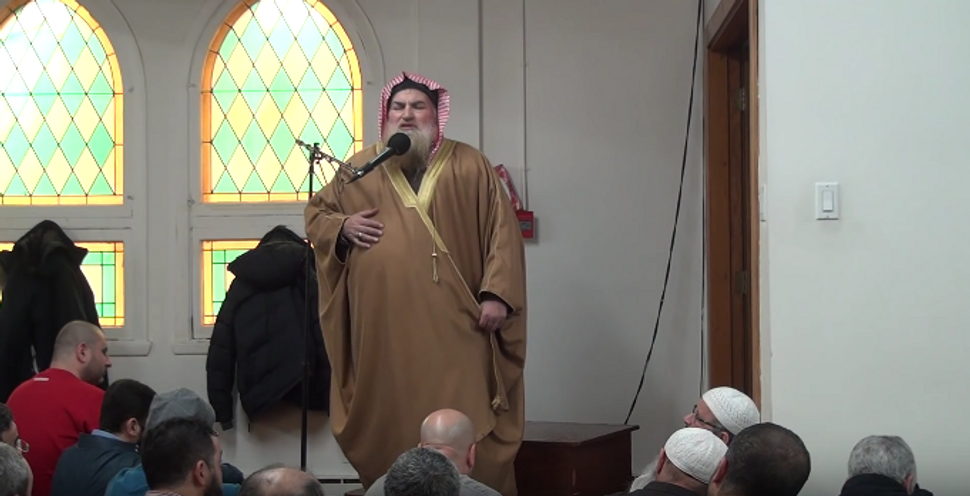 Sheikh Muhammad ibn Musa Al Nasr is being charged with wilful promotion of hatred after an anti-Semitic sermon at a Montreal mosque. Image by YouTube

Canadian authorities have issued an arrest warrant for a Palestinian-Jordanian imam who made anti-Semitic statements at a mosque in Montreal last year, the Montreal Gazette reported Sunday.

Sheikh Muhammad ibn Musa Al Nasr is being charged with willful promotion of hatred. In his guest lecture in December 2016 at the Dar Al-Araqm mosque, he called Jews “the worst of mankind.” Other elements were also objectionable, according to translations of the sermon from Arabic by the Canadian Jewish website CIJNews:

(Similar language, which is derived from Muslim holy texts, was also used in the charter of the Palestinian terror group Hamas).

“Today, the Jewish community of Montreal can sleep safer, knowing that there is a price to pay for inciting violence against our community,” the CEO of B’nai Brith Canada, Michael Mostyn, told the Gazette. “This incident and others like it demonstrate that antisemitism, especially in the guise of religion, remains a serious problem in Canada today.”

According to B’nai Brith, the mosque has yet to apologize for hosting the imam (though other Canadian Muslim organizations did condemn the sermon). As of publication of this article, the sermon is still available on the mosque’s YouTube page.