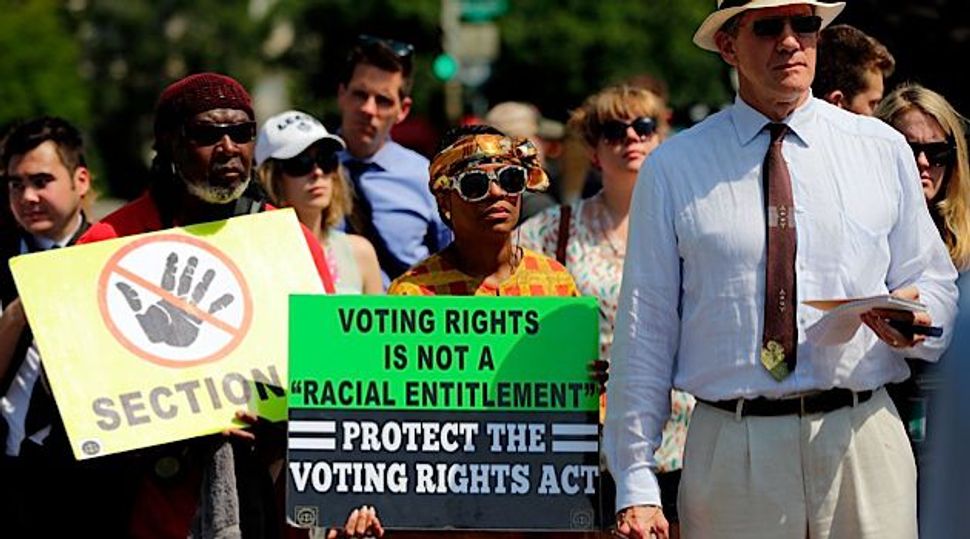 Voting Rights: Representatives of various groups including the NAACP gathered outside of the Supreme Court to hear the ruling on the Voting Rights Act challenge. Image by getty images

(JTA) — A coalition of faith organizations, more than half of them Jewish, issued a statement objecting to a presidential commission investigating what the 24 signatories called “baseless claims” of widespread voter fraud.

In the letter sent to members of Congress Thursday, the coalition urged lawmakers not to fund the Presidential Advisory Commission on Election Integrity, set up by President Donald Trump to probe what he has called widespread claims of improper voting that have the effect of “canceling out the votes of lawful American citizens.”

The faith coalition rejects those claims, citing evidence that the rate of voter fraud in the United States is statistically insignificant.

“The commission was designed to advance baseless claims made by President Trump and others of widespread voter fraud during recent elections in the United States,” according to the letter, organized by the Religious Action Center of Reform Judaism. “Several comprehensive studies have debunked such a myth, finding only a handful of voter fraud cases in recent history.”

The letter warns that the commission could lead to policies that prevent eligible citizens, especially poor people, people of color and the elderly, from voting.