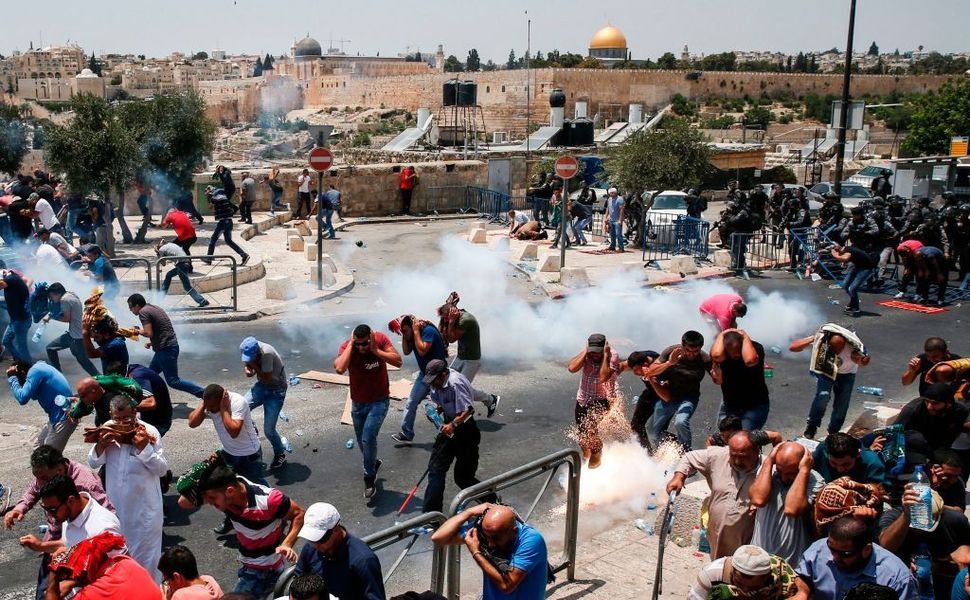 Palestinians outside the Old City of Jerusalem were dispersed by tear gas. Worshippers had been praying, protesting and in some cases rioting outside the Temple Mount due to a boycott called after Israel placed metal detectors at the entrance to the holy site following an attack on the Mount that killed two Israeli policemen. Image by Getty Images

JERUSALEM (JTA) — At least one Palestinian man was killed in clashes in Jerusalem between Israeli security forces and Muslims demonstrating against metal detectors installed at the Temple Mount.

The most serious clashes on Saturday took place in the evening after Muslim worshippers held a prayer service outside the gates of the Temple Mount, which they refuse to enter as long as the metal detectors are in place. Following the prayers, some of the worshippers threw rocks, bottles and other projectiles at Israeli security officers, who responded with crowd control methods including water cannons and tear gas. Rioting also took place in other areas of Jerusalem and the West Bank.

Metal detectors were installed at the entrance to the Temple Mount after three Arab-Israelis shot and killed two Israeli police officers at the holy site on July 14, which Muslim leaders say is a change in the status quo. Since the metal detectors have been in place, Muslims have refused to enter the Temple Mount, instead praying outside of its gates, leading to clashes and the deaths of at least 5 Palestinians in recent days.

The Coordinator of Government Activities in the Territories, Maj. Gen. Yoav Mordechai, said Saturday that he is willing to consider alternatives to metal detectors, as long as they would prevent future attacks on the Temple Mount.