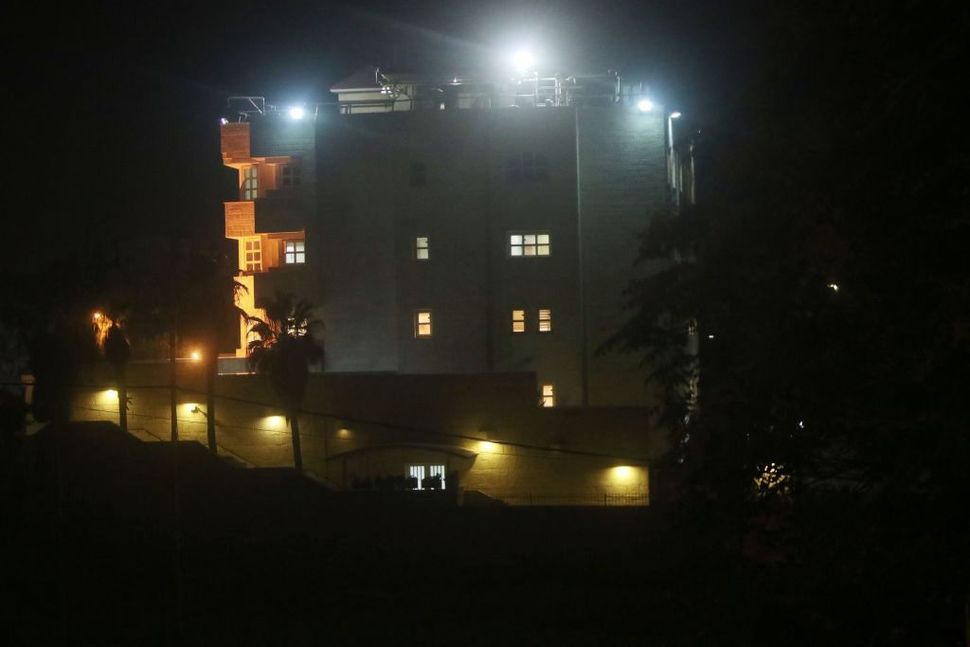 Heavy security measures are taken surrounding the Israeli embassy in Amman, Jordan after a security incident happened where one Jordanian was killed and one Israeli seriously injured. Image by Jordan Pix / Getty Images

JERUSALEM (JTA) — The family of the Israeli Embassy security guard who shot and killed two Jordanians while under attack in diplomatic living quarters has left their home after a publication in Jordan made the guard’s identity public.

The identity of the guard, Ziv Moyal, 28, from a moshav in southern Israel, had been censored in Israeli reports, which identified him only by his first name and his photo blurred.

Jordan’s al-Ghad newspaper on Sunday published a photo of Moyal’s embassy ID, which listed his full name in Arabic.

Moyal’s family reportedly has moved in with relatives out of fear for their safety.

During the incident, which occurred on July 23, Moyal shot and killed an assailant, 17, who had entered a residential building in Amman occupied by the embassy to install furniture and stabbed the Israeli guard with a screwdriver. The building’s owner, who according to Ynet tackled the assailant and attempted to prevent the attack, was killed after being hit by a stray bullet.

Following the incident, Israel refused to hand over Moyal for questioning by Jordanian authorities citing diplomatic immunity. The embassy staff was allowed to leave Amman for Israel nearly two days later amid demonstrations and calls for the death penalty for the security guard.

On Thursday, Jordan’s Attorney General Akram Masaadeh charged the guard in absentia with two counts of murder and for bearing an unlicensed weapon.

Jordan’s King Abdullah II has said he will not allow the Israeli embassy staff back in Jordan unless there is an investigation and a trial for Moyal. Israel on Friday announced that it had launched an investigation.