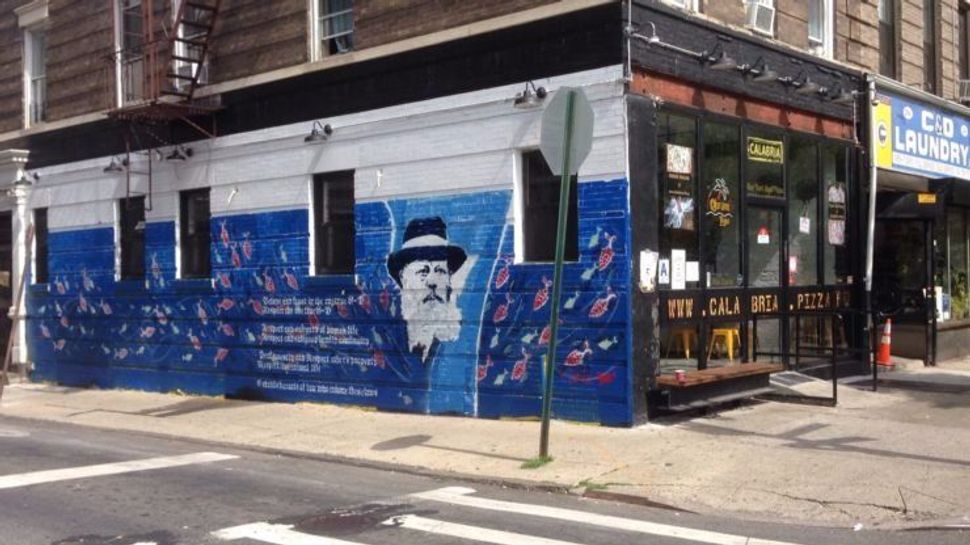 Three newly-painted public murals of the Lubavitcher Rebbe were vandalized in Crown Heights late last week, exposing an ongoing debate about the image of the movement’s late charismatic leader — who is revered as the Messiah by a vocal segment of the community.

The community website Collive uploaded surveillance footage on Friday of two young men vandalizing one mural — located on Kingston Avenue, the main artery of Hasidic Crown Heights — by crossing out the portrait with black paint.

The murals were painted earlier this summer by a Montreal graffiti artist known as Zrey Li, and featured a stylized portrait of Menachem Mendel Schneerson, the seventh and last leader of Lubavitcher Hasidim. Alongside the black-and-white portrait is a list of the Noahide Laws, a list of biblical principles that Schneerson believed should be taught as moral codes for both Jews and non-Jews.

Writing in Collive, a Chabad rabbi had previously denounced the murals as “inappropriate, tasteless and disrespectful,” likening the stenciled style of the image as “suitable for political and cultural figures,” like Martin Luther King Jr. or Che Guevara, “but not for a Rebbe.”

There was also community uproar last month after an image of Schneerson which some saw as mocking appeared in the New York Jewish Week newspaper.