Hollywood’s Original Blonde Bombshell Is The Daughter Of Holocaust Survivors 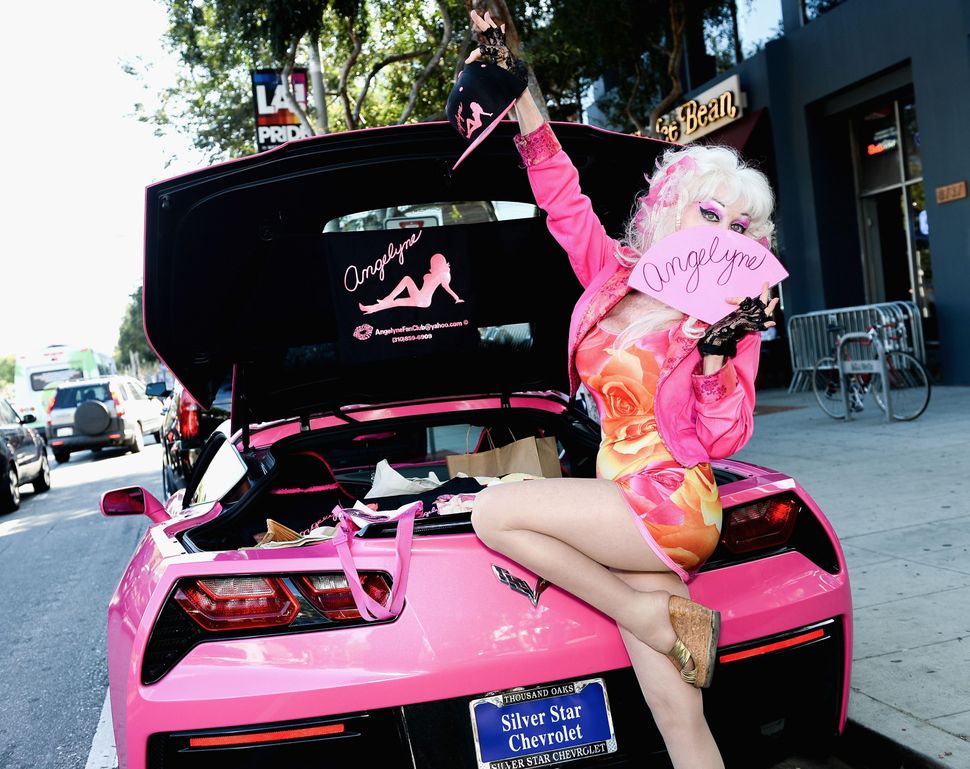 Angelyne Lynne by her trademark pink Corvette at a Los Angeles Pride event in June. Image by Getty

Angelyne — a legendary Hollywood figure for decades, perhaps the first to be famous for being famous, a self-described “Rorschach test in pink” — is the daughter of Holocaust survivors, was born in displaced-persons camp in Germany and was raised for a time in Israel, according to The Hollywood Reporter.

Angelyne, whose career took off after she put her own image on billboards around Los Angles in the 1980s, has worked in movies, music and promotion, and even staged a campaign for governor in 2003. (She got 2,500 votes.) But Angelyne is perhaps best known for being the pink-clad forerunner of international figures like Paris Hilton and Kim Kardashian: she is famous simply for being Angelyne.

The Reporter’s investigation — assisted by a “hobbyist genealogist” — revealed, document by document, the path that Ronia Tamar Goldberg took from a DP camp in Germany to being Angelyne in Hollywood. (Angelyne changed her name to Renee when she came to the U.S.) It involved a brief time in Israel, followed by an unhappy childhood with a stern Holocaust survivor father and a brief marriage.

“I wasn’t there when she made the transition,” her former husband, Michael Strauss, said of Angelyne. “All of a sudden, big boobs, blond hair, this voice — the voice used to make me nuts. It didn’t compute with who I’d known she was.”

Hollywood’s Original Blonde Bombshell Is The Daughter Of Holocaust Survivors